Here's where the Conservative leadership race stands, with one week of campaign left

OTTAWA -- There is a week left in the federal Conservative leadership campaign, and the pressure is on.

A week from now all of the ballots will have been mailed to the Conservative Party of Canada’s Ottawa headquarters, where over the last few weeks ballot verification and processing has been underway on the still-running live feed on the party’s website.

Due to the pandemic, the entire election is being decided by mail-in votes, which once all submitted will be tallied to determine the victor. Ballots are due by Aug. 21, and the party will hold an event in Ottawa on Aug. 23 to announce the winner, under required COVID-19 precautions.

In the final days candidates Peter MacKay, Erin O’Toole, Leslyn Lewis, and Derek Sloan are focusing on their get-out-the-vote pushes, trying to meet with as many supporters and have their teams collect as many outstanding ballots as possible, with the effort being heavily documented on their respective social media accounts.

While the race has largely been framed as a battle between MacKay and O’Toole, the backing Lewis and Sloan have from the social conservatives within the party as well as the second quarter fundraising Lewis’ campaign has drummed up has opened up the possibility of a closer race to replace outgoing leader Andrew Scheer than initially thought.

HOW WILL WINNER BE DECIDED?

As was the case in the 2017 leadership race that saw Scheer elected in a narrow victory over Maxime Bernier, the Conservative party is once again using a ranked ballot system. This means that the party’s internal record-setting 269,469 voters are able to indicate on their ballots their first through fourth choices to be their party’s next leader.

While not all voting members will fill in the ballot past their first choice, those down-ballot votes become key should none of the four candidates secure the required 50 per cent of the vote on the first ballot.

Should the voting need to go to a second, or even third ballot to determine a winner, in each required round the candidate with the fewest votes will have their voters’ next choices allocated to the remaining hopefuls. This process of support reallocation will continue until a candidate hits the 50 per cent threshold and is declared the winner.

HOW DID EACH CANDIDATE CAMPAIGN?

Peter MacKay’s informal entrance into the race came during the post-mortem on Scheer’s 2019 election performance when he remarked during a panel that Scheer’s positions on abortion and same-sex marriage hung around his neck like a “stinking albatross.”

While at the time he stated he’d back Scheer in a leadership review, it wasn’t long before he opted to run to replace him. 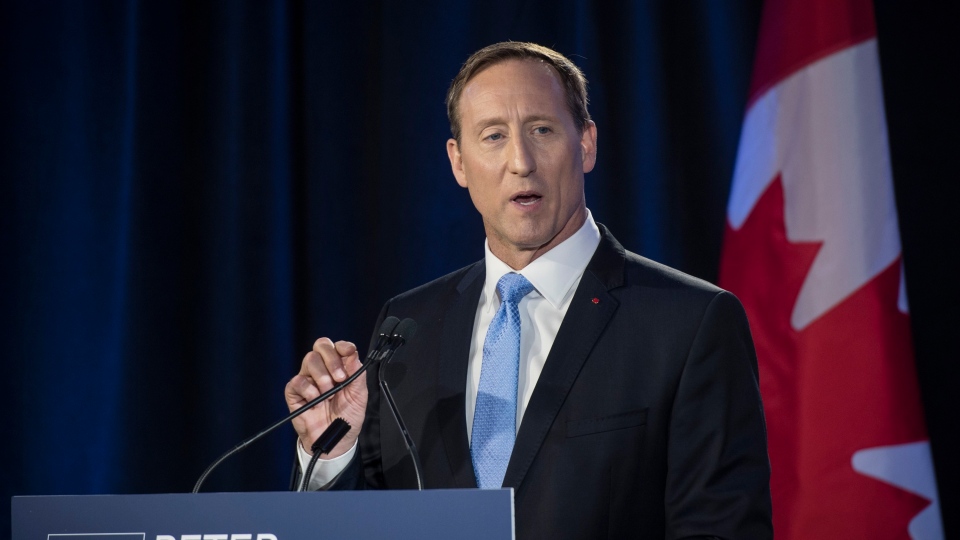 The former federal cabinet minister from Nova Scotia was last leader of the Progressive Conservatives, pre-merger with Stephen Harper’s Canadian Alliance in 2003. After deciding not to run in 2015, MacKay relocated to Toronto with his wife and children, where he worked at a law firm and as a frequent political commentator.

When he entered the race MacKay framed his bid as one to “keep the Conservative movement united,” and to defeat Prime Minister Justin Trudeau, though his opponents have accused him of being “Liberal-lite.”

The key moments for MacKay over the course of the campaign included when deputy party leader and former Liberal MP Leona Alleslev resigned that role so she could back MacKay’s bid, as well as his performances in the two official debates he participated in.

Though, he faced scrutiny when his communications team abruptly ended an interview with CTV News after he was questioned about a since-deleted tweet his team sent out criticizing Trudeau for using Liberal Party donations for yoga sessions.

He also came under fire for pushing for the campaign timeline to be sped up rather than put on pause due to the pandemic, stating that a permanent leader of the Official Opposition would provide "an essential service" in the COVID-19 outbreak.

After finishing third in the 2017 leadership race, O’Toole is trying again to win the top job, this time with the backing of some social media and marketing savvy staff and a large swath of the current federal Conservative caucus.

The three-time Conservative MP represents the riding of Durham, Ont. where he lives with his wife and kids. He was first elected in a 2012 byelection, and went on to become a Stephen Harper-era veterans’ affairs minister. Prior to entering politics O'Toole was in the Royal Canadian Air Force for a decade and later worked as a lawyer. 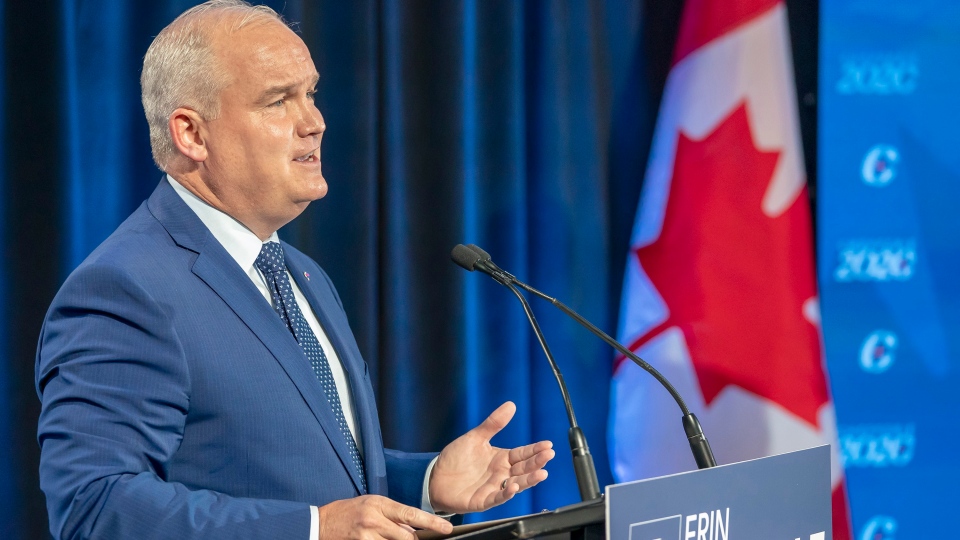 In this race O’Toole has taken policy positions looking to appeal to the base of the party. He's described himself as the "true blue" candidate and has focused his sights squarely on MacKay, who he thinks will divide the party due to his more socially-progressive views.

O'Toole says he's running because "the country needs a strong Conservative party,” and has touted his standing as a current MP as a key asset in holding the Liberals to account “on day one.”

A key moment for O’Toole’s campaign was when Alberta Premier Jason Kenney threw his support behind him, with a key western Canada endorsement.

He also came out on top in the most recent round of fundraising, pulling in $1.24 million in leadership donations between April and June.

Though over the seven-month campaign, O’Toole also faced criticism over using parliamentary resources during his campaign, as well as outsourcing to a U.S. call centre to do voter outreach.

The O’Toole campaign also made headlines just after the leadership debates when allegations were levelled that MacKay's campaign hacked campaign information, which MacKay’s team denied. The O'Toole campaign sought police probes and alleged that a summer student in a Calgary MP’s office accessed login information for a campaign Zoom account.

Leslyn Lewis is making history as the first ever Black woman to be in the running to lead the Conservative party, and her late-in-the-game momentum and possible kingmaker position has not gone unnoticed by party members.

Lewis lives in Toronto and is a lawyer with a masters degree in environmental studies and a PhD in international law. She has a daughter who is in post-secondary school, and a son in high school. 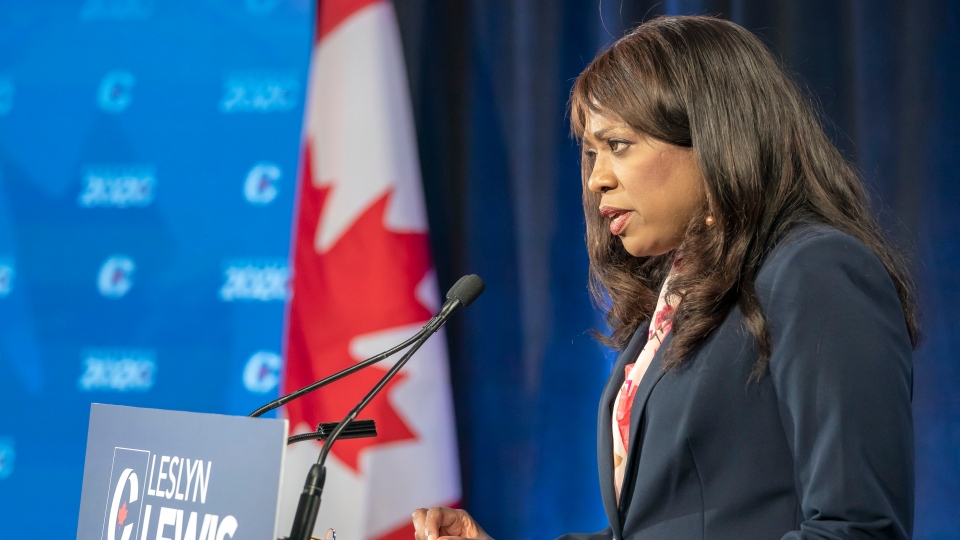 She was also an unsuccessful 2015 federal election candidate. Lewis lost after being put into a race at the last moment when the previous candidate was dropped after a video of him urinating in a cup while working in someone's home surfaced.

Lewis has said she’s running because "Canadians can and should expect much more from their leaders," and because she is seeing "opportunities for future generations falling away."

While she has received the backing of the Campaign Life Coalition, as well as the support of a prominent Christian activist, who called her a "breath of fresh air" as a woman who is against same-sex marriage and abortion, she’s offered up policy positions on a range of topics.

Despite some new attention in light of the focus on anti-Black racism in Canada, in an interview with The Canadian Press, Lewis said her candidacy isn’t about ticking boxes, and she’s in the race for a range of reasons. "My presence alone sends a very strong message," she said in the interview. "I don't think I need to articulate the obvious."

After a shaky performance during the French-language debate, Lewis fared far better when she had the opportunity to debate in English. It was then when she led the conversation on systemic racism.

When a barrage of racial slurs was inserted into the comments section during one of the later unofficial party debates, Lewis said it was unsurprising.

Derek Sloan has been spending his final days on the campaign trail touring around Alberta and British Columbia, holding outdoor campaign rallies, while sending out emails to his supporters about his concerns over mandatory masks and mandatory vaccines as forms of COVID-19 protection.

Sloan is a rookie Conservative MP elected for the first time in 2019 in the riding of Hastings-Lennox and Addington, where he lives with his wife and children. Prior to entering politics he worked as a lawyer and small business owner. 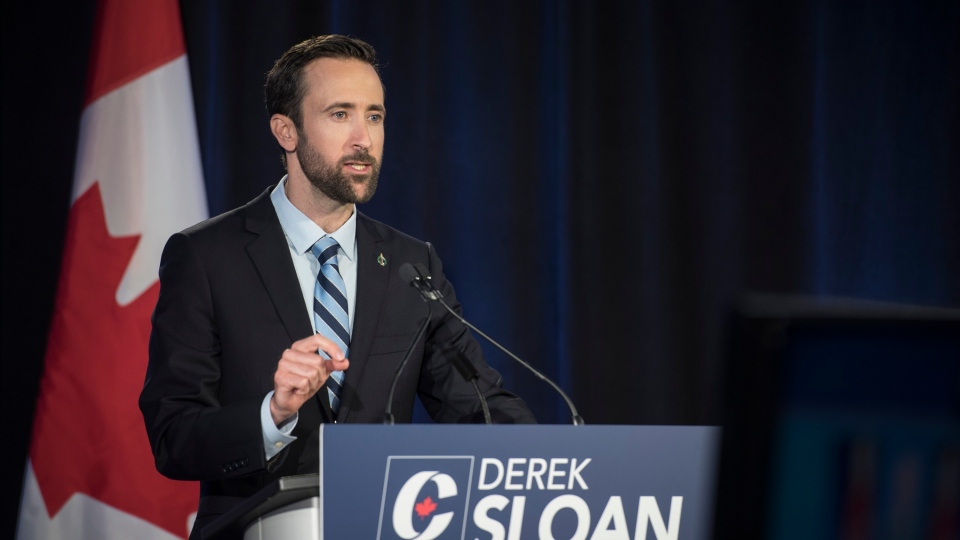 Since entering the House of Commons he's stated that he believes the "cause of sexual orientation" is "scientifically unclear," and has also received the backing of social conservative organization Campaign Life Coalition.

During the debates Sloan often found himself agreeing with certain things his fellow candidates said, and focusing a lot of his criticism on the Liberals’ handling of COVID-19.

Over the course of the campaign Sloan’s more controversial comments—including those about Chief Public Health Officer Dr. Theresa Tam— have prompted questions to Scheer as to whether Sloan would keep his place in the Conservative caucus.

During one videoconference webinar he held with supporters, Sloan accused the Liberals and Prime Minister Justin Trudeau of “effectively putting into law child abuse” in relation to their policies on gender identity and conversion therapy.

These remarks also prompted Trudeau’s office to call for Scheer and the other candidates to condemn Sloan’s comments, which only MacKay did.

HOW THE RACE HAS CHANGED

The leadership race will go down in history as unlike any other leadership search a federal Canadian political party has ever had due to the pandemic, with the exception of the federal Green Party, which is also looking for its next Elizabeth May.

Under the original leadership race timeline, the party was set to hold its debates in April and announce the winner in Toronto in late June, but the entire race was put on pause in March due to COVID-19 and the nationwide shutdowns it forced.

The campaign was then restarted under new parameters in late April “with adjustments to accommodate current circumstances.” It was then that the Leadership Organizing Committee (LEOC) declared that it wouldn’t be possible to meet all deadlines necessary in time for the originally-planned June 27 announcement of a winner and so the vote would proceed with mail-in ballots, and the Aug. 21 deadline.

After going head-to-head in two debates on June 17 and 18 — where given the public health concerns, there was no live audience, and physical distancing measures were in place — the leadership hopefuls made pushes to separate themselves from the rest of the pack and drum up support.

HOW DID IT START?

The leadership race got underway on Jan. 13, giving hopefuls 45 days to declare. The hunt for a new head of the party was prompted by Scheer announcing in December—amid criticism over his election performance— that he was stepping down as leader but would be staying on until a replacement was named. This decision ended up being questioned by some over the course of the extended campaign to find the next leader, as so much focus was on federal leadership through the emergency phase of the pandemic.

In order to make it on to the ballot, candidates had to meet three separate fundraising and support thresholds, which saw the candidate pool whittled down considerably in comparison to the 2017 leadership campaign.

Two-time Conservative MP from Ontario Marilyn Gladu, longtime Conservative party member and former staffer Rudy Husny, Alberta businessman and past leadership hopeful Rick Peterson, and Ontario lawyer Jim Karahalios were all candidates in the race that were deemed ineligible along the way.

Despite some early pushes and enthusiasm among party members, past interim party leader Rona Ambrose and MP Pierre Poilievre didn’t end up throwing their hats into the ring.