Andrew Scheer stepping down as Conservative leader, staying on until replacement chosen

OTTAWA -- Andrew Scheer is resigning as the leader of the Conservative party after rejecting calls to do so for weeks, but is planning to stay on until a replacement is named.

In announcing his decision in the House of Commons after meeting with the Conservative caucus on Parliament Hill on Thursday morning, Scheer said he will be asking the party’s National Council to “immediately begin the process of organizing a leadership election.”

“As our party embarks on this exciting opportunity of electing a new Conservative leader and Canada's next prime minister, I intend to stay on as leader of the party and the Official Opposition," Scheer said, calling his resignation "one of the most difficult decisions" he has ever made.

Late Thursday evening, the Conservative caucus called a sudden meeting on Parliament Hill. According to Conservative caucus chair Tom Kmiec, after less than an hour behind closed doors, the caucus voted unanimously that Scheer should stay on as interim leader until a suitable replacement is found.

“We conferred, we discussed it together, and by unanimous agreement we want Andrew Scheer to stay on as full leader until such time as the party members decide on who should replace him as permanent leader,” he said.

This decision comes after questions were raised as to whether he should stay on or whether the caucus would be better off with a fresh face.

During his Commons address Scheer said that serving as leader of the party that he loves “has been the opportunity, challenge of a lifetime," Scheer said.

Scheer said that the party is too important than one person and the Conservatives need someone who is in it 100 per cent, and implored his caucus and party to stay united and focused on forming government.

He began telling members of his staff about his decision to resign earlier this week, according to Dustin van Vugt, the executive director of the Conservative Party of Canada.

After Scheer announced he won’t be the leader of the Conservatives in the next campaign, his caucus took turns hugging him and shaking his hand, before each of the other opposition party leaders and Prime Minister Justin Trudeau responded to the news. His political opponents thanked Scheer for his dedication and service, and recognized the toll politics at the highest level in Canada can take on politicians’ families.

“I very much wish him all the very, very best in his next and exciting steps, whatever they be,” said Trudeau.

Scheer’s wife Jill was watching from the gallery above the chamber. 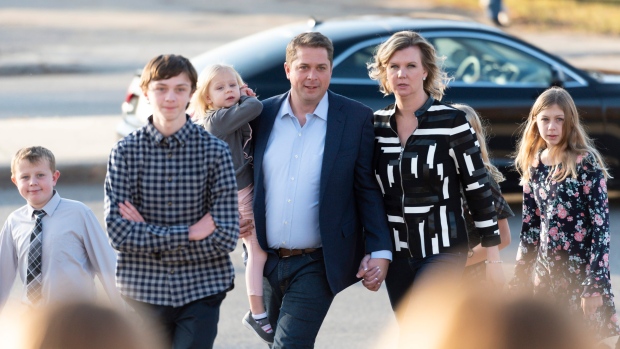 His decision to resign comes as CTV News has confirmed that the Conservative Fund — money provided by the federal party overseen by a board of senior Conservatives including former prime minister Stephen Harper— was used to cover the difference in cost for private schooling for his kids in Ottawa, versus what it was when they lived in Regina.

While the party says the offer to cover costs associated with “being a national leader,” was all above board, some are questioning why it was not disclosed to party members.

“I did not know about it, nor would I necessarily… But what I do know is, that is going to cause a lot of difficulty for some members of my party. They are not going to look at it as an appropriate use of funds,” said former deputy leader Lisa Raitt on CTV News Channel.

Conservative Senator Jean-Guy Dagenais, who has been an outspoken critic of Scheer since the campaign, said Scheer should refund the party for these expenses, which in his view should have gone towards helping candidates’ campaigns.

Because of the disappointing election loss for the party, Scheer was set to face a mandatory leadership review at the party convention in April, but in recent weeks there was mounting pressure from party insiders for Scheer to step aside sooner.

Criticisms spanned from not making gains in key electoral grounds including Ontario and Quebec, to his personal stance on social issues such as same-sex marriage and abortion, Scheer was dogged with criticism that he would not be able to beat Prime Minister Justin Trudeau in the next election.

During the race, the now outgoing Tory leader faced criticism for not attending nationwide climate rallies, and was forced to explain his resume amid allegations he falsely worked as an insurance broker without a licence before his political career began.

He was also inundated with questions about the fact that he still held dual Canadian and American citizenship, despite having begun the process of revoking it. Asked why he hadn’t mentioned this earlier, Scheer said it was because he was “never asked.”

Among the high-profile voices were former Conservative cabinet minister Peter MacKay, who compared Scheer’s election loss to “having a breakaway on an open net and missing the net,” but later said he supported Scheer, to Harper’s former director of communications Kory Teneycke saying that Scheer’s position on same-sex marriage “could be fatal” to his future as leader and that he’d be gone before the April review.

Then came the formation of an anti-Scheer group called “Conservative Victory,” focused on mobilizing support to call for Scheer’s ouster. To counter this, a “Stand with Scheer” group emerged as a counterpoint, promoting the support he still had within his caucus. 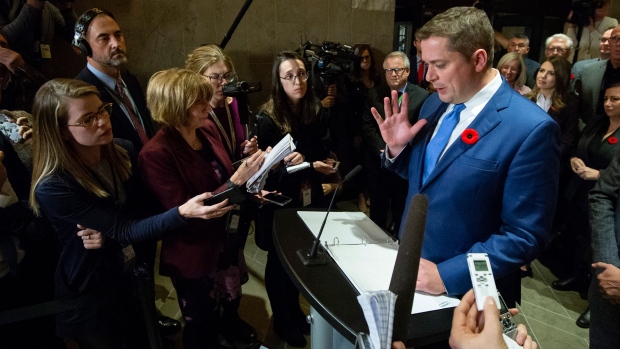 In the aftermath of the campaign, Scheer focused on the gains his party made in the 40-day election, such as winning the popular vote and knocking the Liberals down to a minority.

He insisted his caucus was united and focused on holding the Liberal minority to account, but then ruffled feathers with his choice of recent Liberal floor-crosser Leona Alleslev as his deputy. Longtime MP Ed Fast refused a critic role, citing concerns with Scheer’s leadership.

Conservative MP Peter Kent, who just one day before Scheer’s announcement was highlighted by the “Stand with Scheer” faction on social media as being behind him, said Scheer has been “heavily pressured by the situation and by, in some cases, improper impatient pressure from consultants and lobbyists who stood and stand to profit from a leadership race.”

Recognizing the frustration with the outcome and calls for considerable changes before the next election, Scheer embarked on a cross-Canada listening tour, fired some senior staff members, and has been awaiting a report from former Conservative cabinet minister John Baird who he tasked with conducting a Conservative campaign post-mortem.

Baird has yet to start writing his report, and is still working on getting feedback on the campaign through meeting with riding-level staff, volunteers, and those who worked in the party’s campaign war room.

“I look forward to writing and then submitting my report when it is complete. I hope it will inform our Party’s next campaign and provide advice to whomever the #CPC membership select as leader,” Baird tweeted Thursday.

“I’m obviously very disappointed,” Conservative MP and caucus-party liaison Diane Finley told reporters on Parliament Hill. “He’s done a great job of uniting the party, increasing the vote. Any reasonable person thought it would be a two-election process to get back to government.”

“It’s a sad day but I think it was the right thing for the party,” said Conservative MP Marilyn Gladu.

Scheer, the MP for Regina-Qu'Appelle, Sask. since 2004, was elected the Conservative party leader in 2017, following a hard-fought and crowded leadership competition.

His announcement comes as the House of Commons is set to adjourn by Friday for a six week hiatus during which all MPs will decamp for their own ridings and family time, giving Scheer a considerable window to be out of the public eye.

On CTV News Channel, Conservative strategist Jason Lietaer said that while it is not shocking that Scheer is resigning, the timing of it took him a bit by surprise.

Lieater said Scheer stepping aside has given the party “an incredible gift” by not drawing this out.

Now, the party will be gearing up for another contest to select the person who will lead the party into the next federal election.