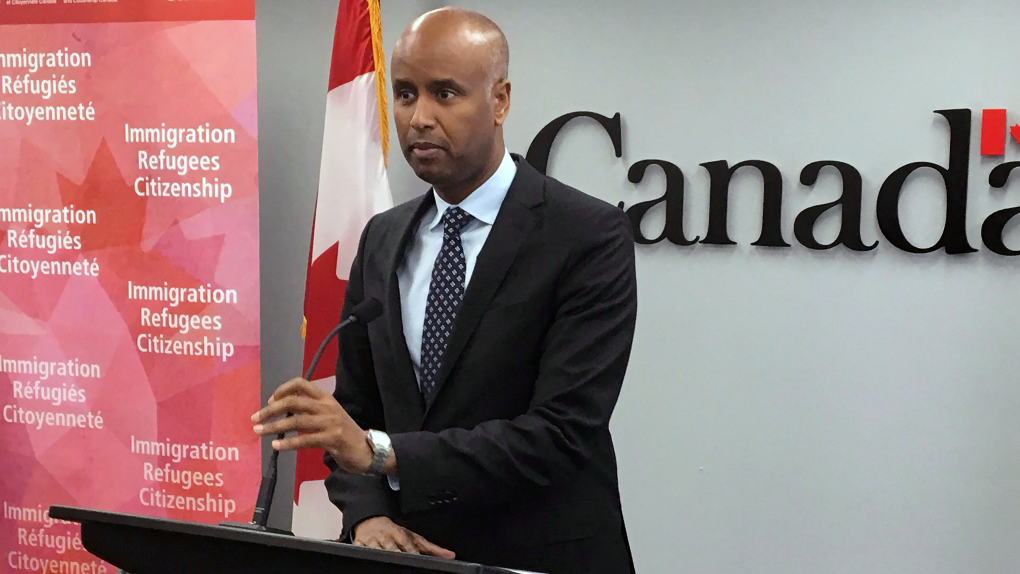 Ahmed Hussen, the federal minister of Immigration, Refugees and Citizenship, speaks during a press conference in Halifax on Monday, July 9, 2018. THE CANADIAN PRESS/Michael Tutton

OTTAWA – The federal government is boosting its funding for pre-arrival settlement services for immigrants to Canada, with the aim of accelerating newcomers' ability to adjust to life in a new country and find jobs in their fields.

Immigration, Refugees and Citizenship Minister Ahmed Husen announced in Vancouver on Thursday that his department is providing 16 organizations a combined $113 million to offer immigration and settlement support both virtually and in-person abroad, through to 2023.

These organizations connect with immigrants while they are still in their country of origin to provide them with general, regional, and occupation-specific employment services to help improve their job prospects.

These groups also encourage immigrants to apply for any relevant job licenses and professional qualifications before they arrive in Canada, as well as get a head start on any required skill training.

The in-person assistance will be offered in China, India, the Philippines, and a pilot project for Francophone services in Morocco is being established.

Hussen said that enhancing the current pre-arrival services will help immigrants transition to the Canadian labour market more smoothly, and potentially quicker. The services will be split into three categories: economic and family class immigrants, Francophone immigrants, and refugees.

One such organization is a B.C. non-profit social service agency called S.U.C.C.E.S.S, which is receiving $22.4 million of the funding. Since 2008, S.U.C.C.E.S.S. has provided pre-arrival services to more than 14,800 newcomers to Canada from 120 countries.

"We are grateful for the opportunity to assist even more newcomers in partnership with IRCC in the years to come," said the organization's CEO Queenie Choo.

During the announcement, Hussen offered examples of immigrants’ contributions to the Canadian economy, such as outgoing Mountain Equipment Co-op (MEC) CEO David Labistour, who was born in South Africa and immigrated to Canada in 1999. Less than a decade later he became CEO and and now employs more than 2,000 people across Canada.

"The positive role that immigrants play in our economy and society, underscores just how important it is for us to insure that all newcomers to Canada succeed… for this to happen we need to ensure that newcomers have the tools they need to be able to find their way in Canadian society," Hussen said.

In late December, new data from Statistics Canada showed that the employment gap between newcomers and Canadian-born workers continues to narrow as immigrants make up a growing percentage of the Canadian labour force.