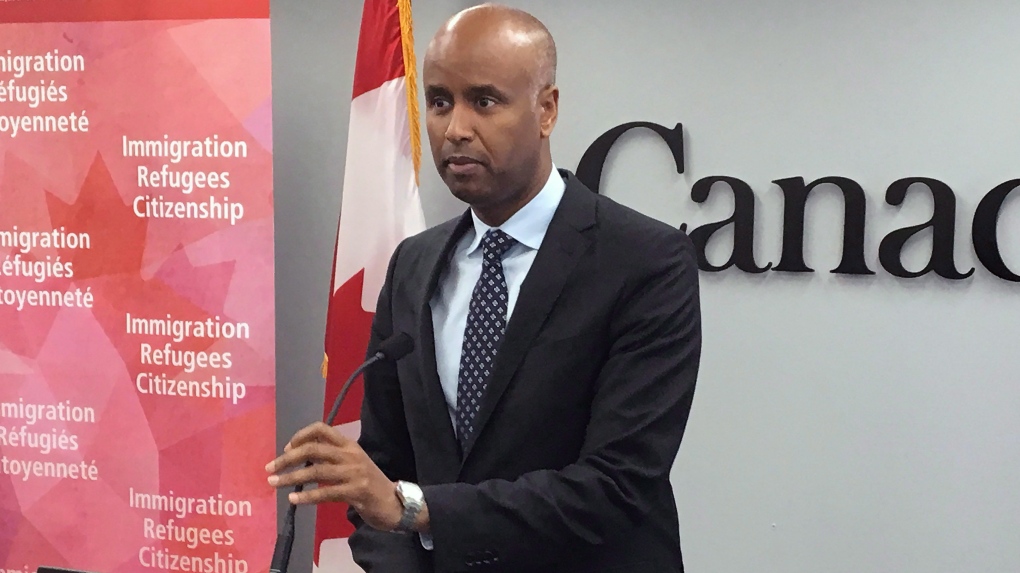 Ahmed Hussen, the federal minister of Immigration, Refugees and Citizenship, speaks during a press conference in Halifax on Monday, July 9, 2018. (THE CANADIAN PRESS/Michael Tutton)

OTTAWA -- The Trudeau government is scrapping an unpopular lottery system for reuniting immigrants with their parents and grandparents and is increasing the number of sponsorship applications it will accept next year.

Immigration Minister Ahmed Hussen announced changes to the sponsorship program for parents and grandparents Monday, which will see the random selection process for sponsorship applications replaced with a first-come-first-served process.

The government will also accept more parent and grandparent sponsorships in 2019. The current cap of 17,000 applications will be increased to 20,000 next year.

The so-called lottery system for this program drew criticism when it was introduced last year after many potential sponsors said they felt it was unfair.

Ottawa is now responding to the feedback Hussen received during a cross-country listening tour last year, the minister said.

"(Canadians) did express some concerns about the lottery, the random selection process," Hussen said.

"What I'm announcing this morning is feedback that we got from Canadians that they would like to see changes in the selection process."

Starting in 2019, potential sponsors will indicate their willingness to sponsor a parent or grandparent by filling out an 'interest to sponsor' form online. Instead of randomly selecting people from this list for sponsorship, as is the current policy, applications will instead be invited based on the order in which the 'interest to sponsor' forms are received until the 20,000 cap is reached.

"This is a fairer first-in system that will benefit all those who are interested," Hussen said.

"Of course, once we receive the interest-to-sponsor form and we reach the cap, then we go backward and look at who's actually qualified to sponsor, because they also have meet certain requirements."

The applications system has long been the source of criticism. Prior to 2017, applications were prioritized based on geography or would have better odds for success if families could afford to pay for expensive immigration lawyers.

Hussen says he believes the current lottery system is fairer than the system that was in place when the Liberals took office, but believes bringing in a first-come-first-serve model will further improve this program.

Arghavan Gerami, an immigration and refugee lawyer based in Ottawa, has several clients who met all the requirements for sponsorship this year but were not selected in the lottery.

Families looking to bring their parents or grandparents to Canada to help with children or for cultural or personal reasons were frustrated by the randomness of the lottery selection process and wanted a change, Gerami said.

But it's important that the government is transparent about how this new system is run, she added.

"It still, to me, is going to be very difficult in terms of transparency to show who were the first 20,000 who applied,' she said.

"People are going to say, 'Why didn't I get in? Are you going to publish how you selected the first 20,000?' Because essentially it's going to come down to seconds in a particular minute how many applicants send in an expression of interest."

The government's decision to increase the cap on this program comes as the result of persistently high demand. In 2017, just over 100,000 'interest to sponsor' forms were filled out online, according to government data. Initially only 10,000 were invited to submit applications, but the government increased that number to 17,000 this year.

Gerami says she questions why there are caps on this program at all, considering the high level of interest and demand from individuals wishing to sponsor their family members.

"It's still a quota system that is going to be very hard to expand and to cover all of the applicants," she said.

"I think you're still going to have the same issue in the sense that even if you make your best effort to get your form in and be in the first cut, you're still trying out your luck."

Hussen says there are caps on virtually all permanent residency immigration programs, which are determined in close consultation with provinces and territories.

He noted the cap on the parents and grandparents sponsorship program was at 5,000 when the Liberals took office in 2015, and will quadruple to 20,000 next year.

A major backlog for processing of these applications has also been reduced. In 2011, the inventory of applications had reached a peak of 167,000 applications. In June that number stood at 26,000.