TORONTO -- The front running federal parties are "gripped in a tie" with the latest polling numbers showing the Liberals leading the Conservative Party with a little more than one per cent between them, according to pollster Nik Nanos.

According to Nanos Research's nightly tracking data conducted for CTV News and the Globe and Mail, the Liberal Party has 32.3 per cent support of Canadians surveyed, closely followed by the Conservatives at 31.2 per cent.

The latest polling data, which was released Tuesday, also shows the NDP at 18.9 per cent, an increase of 0.3 per cent from the night before.

The People’s Party of Canada leads among the remaining parties with 6.7 per cent support, trailed by the Bloc Quebecois at 6.4 per cent and Green Party at 3.8 per cent.

During the Monday edition of CTV's Trend Line podcast, Nanos said while polling may show the Liberals numerically ahead, the numbers are "very close" and the final outcome remains a "toss up right now."

In polling data released Tuesday, Nanos noted that it remains a tie between Liberal Leader Justin Trudeau and Conservative Leader Erin O’Toole for preferred prime minister. While O'Toole is trending up, he added that support for Trudeau has been trending down over the past three nights, making the race neck-and-neck.

In terms of support for the party leaders, Trudeau continues to maintain his slight lead on the preferred prime minister front with 30.8 per cent support, followed by O’Toole with 29.5 per cent. NDP Leader Jagmeet Singh trails at 17.5 per cent. The People’s Party of Canada Leader Maxime Bernier leads among the remaining parties with 6.1 per cent support, followed by Bloc Quebecois Leader Yves-Francois Blanchet at 3.1 per cent and Green Party Leader Annamie Paul at 2.4 per cent.

Interestingly, the percentage of Canadians who are undecided in their choice for preferred prime minister has plummeted to 10.5 per cent -- one of the lowest of the campaign, according to Nanos.

Nanos told CTV News Channel on Tuesday that he is keeping an eye on the NDP and the PPC as he says those two parties are "effectively potential spoilers for the two front runners."

Nanos noted that even at 6.7 per cent, the PPC is an "important factor" for the Conservative Party.

"Those are likely disaffected... former Conservative voters who have decided to send a message -- what I'll say disenchantment -- by sticking with Maxine Bernier and the People's Party," he said.

While the election is still too early to call, Nanos said a majority government is likely no longer in the cards for any party. 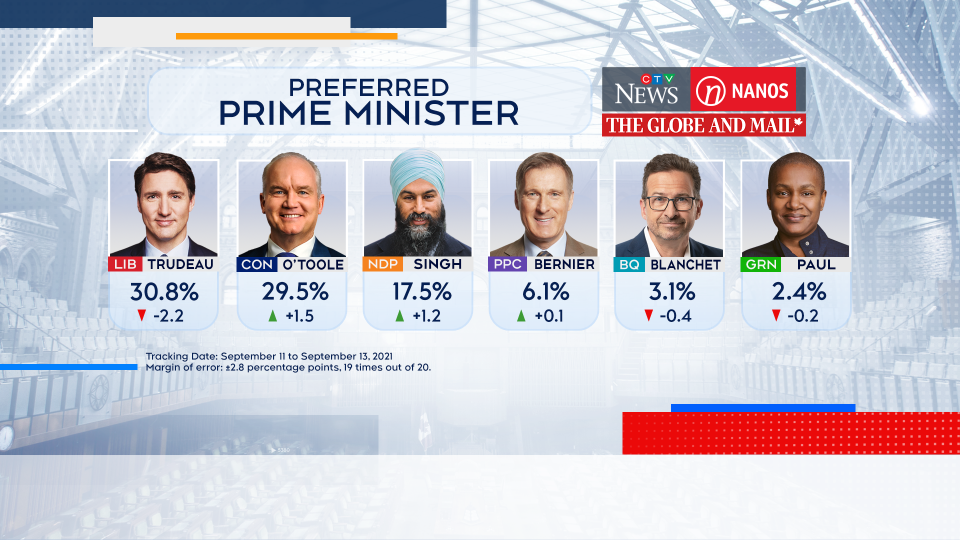 A national random telephone survey (land-and cell-line sample using live agents) of 1,200 Canadians is conducted by Nanos Research throughout the campaign over a three-day period. Each evening a new group of 400 eligible voters are interviewed. The daily tracking figures are based on a three-day rolling sample comprised of 1,200 interviews. To update the tracking, a new day of interviewing is added and the oldest day dropped. The margin of error for a survey of 1,200 respondents is ±2.8 percentage points, 19 times out of 20.

'He went after my family': Trudeau defends his response to protester

O'Toole mum on how many immigrants he would bring, promises tougher border measures

Do we need laws preventing protesters from blocking hospitals?

'Canadians sacrificed so much to protect my right to vote': Refugee casts ballot in first federal election

Refuse to wear a mask? You will be turned away from voting in some provinces, Elections Canada warns

Many mail-in ballots requested, but not the millions Elections Canada expected

Liberals would make it a criminal offence to block health-care buildings, threaten workers

O'Toole kicks off final week of campaign on the attack