TORONTO -- The pandemic quickly plunged Canada into a very sharp economic recession in early 2020. Governments rolled out a range of supports to help Canadians pay the bills and keep the economy functioning. But we know that the financial impacts have not been felt evenly.

At Environics Analytics, we looked at the change in average household income through the pandemic across our 15 voter segments and the 338 federal ridings to understand how this might affect different voters, and the outcome in the all-important riding races on Election Day, Sept. 20.

We estimate that almost all the income growth over the two-year period came in 2020 with the introduction of substantial income supports. Incomes are expected to be mostly stagnant in 2021 as some of those supports are rolled back.

With an election lens, what happened during the pandemic to the household incomes of the voter segments?

The table below shows that income growth during the pandemic was a little higher among young, well-educated Canadians in cities; Indigenous Families (a segment of non-urban Indigenous people), and some modest-income older Canadians.

More affluent segments generally saw income grow at a slower rate. Overall, however, income growth at a segment level is pretty similar – the smallest increase was 6.1%, with the largest at 8.0%. But the old adage, “Beware of averages”, is an important one to remember in this case, as you’ll see below. 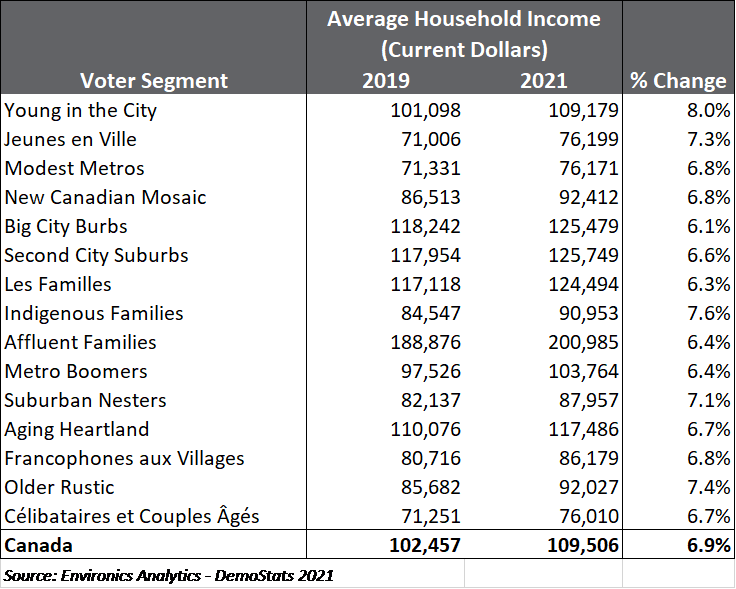 The story becomes much clearer when we look at income growth by riding. Ridings with more rapid -- or conversely, slower -- growth tell the story of what happened to Canadians’ income during the pandemic.

We’ve broken it down into five types of ridings to tell the story.

Every one of them is in Manitoba or Saskatchewan, and almost all were won by the Conservatives by wide margins in 2019. There are only three races that were won by small margins (<10 percentage points): two in Winnipeg, and one in Saskatoon.

The boost in value of agricultural products through the pandemic has likely lifted incomes in the region generally. Note that our household income estimates are for mid-year, so 2021’s devastating droughts would not be showing in these numbers.

The strong public health response in the Atlantic Provinces maintained the most normally functioning economy in the country through much of the pandemic.

The boost from an unusually large number of people relocating to the Maritimes added to the action. As a result, these 25 Maritime ridings had strong household income growth in the 9 to 10% range (Newfoundland & Labrador is a different story discussed later).

If polls are correct, this region may not be as easy for the Liberals to win as it has been in the past two elections. The eight ridings highlighted above were close races and are ones to watch. Will voters reward the Liberals with re-election given the financial progress they’ve made?

The Liberals hold all but one of the close races (including Fredericton where the MP switched from the Greens to the Liberals). Or will we see some upsets, echoing the recent Nova Scotia election which flipped the province to a Progressive Conservative majority?

Urban ridings in Canada’s three largest cities had above-average income growth in the 8-10% range (compared to the 6.9% national average).

These ridings likely benefited from a young, educated workforce in jobs that more easily adjusted to the new virtual work reality. Also, their in-demand skills were in short supply, likely boosting pay packages. There are only a couple of close races here, with the Liberals holding wide leads in most races in 2019.

The downturn for Canada’s energy sector has been felt for some time now, even before the pandemic. But the sharp drop in energy prices in 2020 means incomes grew at a comparative crawl in Alberta and Newfoundland & Labrador - in the 2 to 5% range, well below the national average of 6.9%.

The Alberta seats were won with enormous margins by the Conservatives, while the Newfoundland & Labrador ridings were all Liberal with much closer margins. If economic stagnation pushes enough Newfoundland voters to opt for change, some of the seats they hold with 10%+ margins could come into play for the Conservatives.

These ridings have a starkly different pattern of income growth from the City of Toronto (discussed above): income grew at 4 to 5% through the pandemic, about half the rate of Toronto’s.

While the Toronto suburbs have high incomes overall, the households here have high housing costs and tend to have lots of debt so the large income numbers can be deceiving in terms of financial position. The Southwestern Ontario ridings make up much of Ontario’s traditional manufacturing belt.

One thing these ridings have in common is a high percentage of residents working in industries affected by pandemic lockdowns: business and manufacturing plant shutdowns where turning to virtual work was not an option. There were eight close races in this set of ridings: five were Liberal, two Conservative, and one NDP. This is a key set of ridings to watch in this election.

If Canadians’ economic outcomes influence how people vote in this election, the regions to keep an eye on are the Maritimes (can the Liberals cash in on the strong performance?), and Toronto’s 905 suburbs and Southwestern Ontario (Will the Liberals be held accountable for stagnation caused by business lockdowns that suppressed earning potential?).

Environics Analytics produces detailed postal-code-level estimates and projections for annual household income based on publicly available, aggregated taxfiler data. We combine this with macroeconomic data and demographics to create these estimates and projections as part of our annual DemoStats database. The results are cross-referenced with PRIZM segments, which is the basis for our Voter Segments, and with federal ridings.