Child care a key issue in a large number of tight ridings across the country: Environics Analytics 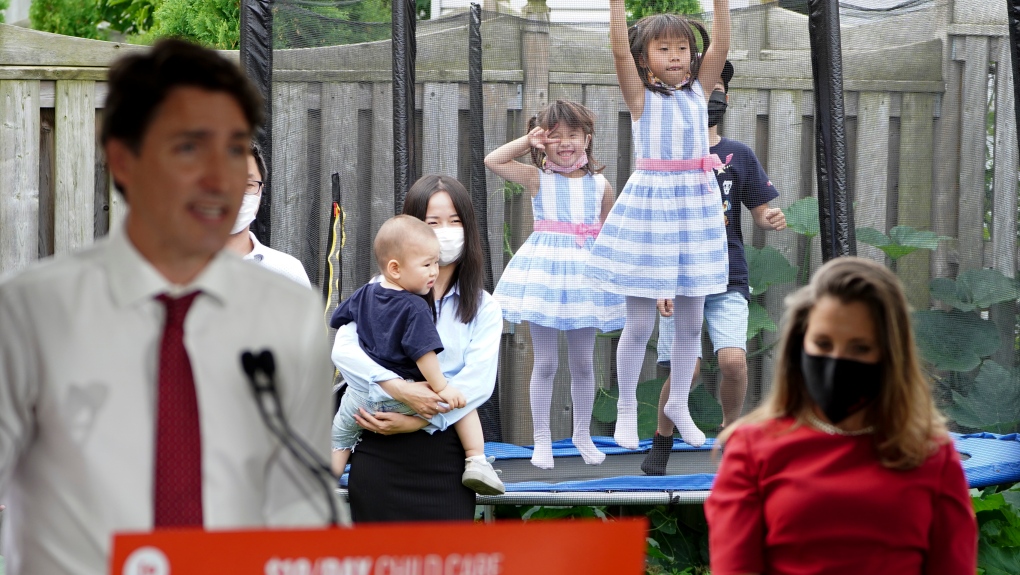 A group of youngsters play on a trampoline as Liberal Leader Justin Trudeau makes a campaign stop in Markham, Ont., on Tuesday, Aug. 17, 2021. He is joined by Liberal candidate for University-Rosedale, Chrystia Freeland. THE CANADIAN PRESS/Sean Kilpatrick

TORONTO -- Making child care more affordable has been discussed for a long time in Canada; this election has spurred some action by the parties in supporting parents – especially women – to return to the post-pandemic workforce.

The governing Liberals tried to cut deals with the provinces prior to calling the election with many signing on, while the opposition parties have proposed their alternatives.

The debates included some heated discussions about child care, including the ones in French. This may surprise some non-Quebecers, given that Quebec has been famous for its subsidized child-care program for many years.

Environics Analytics (EA) sought to understand child-care expenses for different segments of the Canadian population to sort out which races in the upcoming election could be most in play on this issue. Interestingly, Quebec is one region that figures strongly.

Environics Analytics created 15 voter segments to understand the people behind local voting patterns and the key election issues. We found that four of the 15 spend a significantly higher proportion of their household expenditures on child care than the other segments: from 26% to 41% more. Two of those segments are Francophone, including the one that spends proportionately the most, and two are primarily Anglophone.

• Les Familles (upper-middle-income suburban Quebec families). They tended to vote for the Bloc Québécois (BQ), with the Liberals close behind in 2019.

• Second City Suburbs (middle-class suburban families around cities other than Vancouver and Toronto). On balance these were Conservative voters, but in Ontario it was a close race in 2019.

• Big City Burbs (upper-middle-class, multi-ethnic families primarily around larger cities in B.C., Alberta and Ontario). They voted Conservative in B.C. and Alberta (with the Liberals close behind in B.C.), while they voted Liberal in Ontario.

The table below shows the relative spend by each segment on child care as a percentage of total household expenditures. We’ve expressed the share of expenditure as an index where the Canadian average share is shown as 100. The approach makes it easy to understand how different each segment is from the national average.

There is more information on the segments themselves, here. 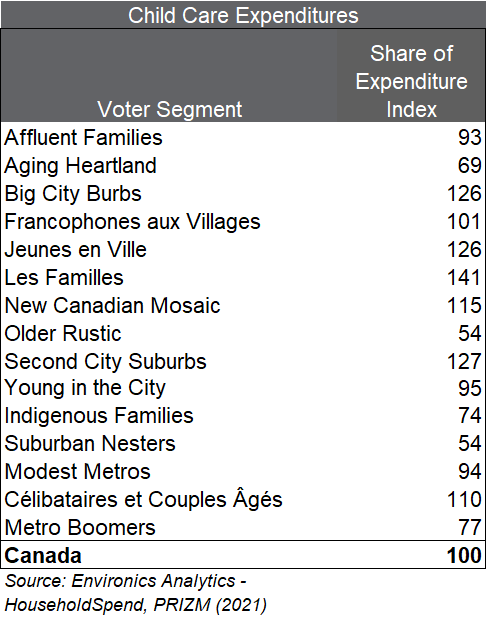 When we turn the expenditure profile across the voter segments into riding-level child-care expenditure estimates and focus in on the close races from 2019, the results show that this is a lynchpin issue that could influence results in many races.

The 20 ridings with the highest shares of expenditure are all in Quebec (13) and Ontario (7), the regions most in play for the Liberals and Conservatives.

Looking a little more broadly, 89 ridings had child-care expenses taking up a significantly larger (>20% larger) chunk of expenditures compared to the Canadian average. Of these seats, the Liberals won 44, the Conservatives won 28 and the BQ won 14. 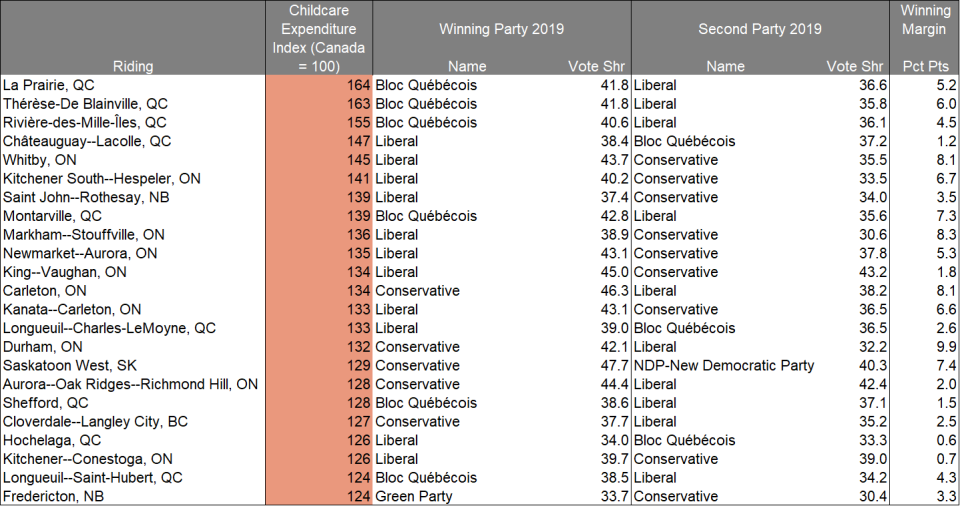 Child care is a key issue in a large number of close races in the very regions that the Liberals are trying to upset opponents or hang on to their existing seats. The Quebec child-care agreement should help them in six seats the BQ won and another three that they already hold, all with thin margins.

The more-generous child-care platform the Liberals are offering should play well in these critical races, plus in tight races in other parts of the country listed in the table.

Environics Analytics used its HouseholdSpend database that combines data from Statistics Canada’s Survey of Household Spending with its current-year postal code level demographic estimates to project current expenditures for each of Canada’s approximately 800,000 six-digit postal codes. The data were aggregated to 15 different voter segments based on common demographics and tendencies in regional voting behaviours in the 2019 federal election. The expenditure data were also aggregated to ridings for this analysis.