TORONTO -- Climate change is a hot-button issue in this federal campaign, and data shows that a party’s environmental strategy could help influence its results in at least 9 ridings where races were neck-and-neck in the last election.

Environics Analytics analyzed all 338 Canada’s federal electoral districts and found environmental issues are important to a wide swath of Canadians.

The data and analytics firm found that voters in 46 ridings had above average concerns – compared to the national average -- for the way their lifestyles have an impact on the world around them.

To get a better sense of how important environmental issues are to Canadian voters, Environics Analytics analyzed 15 voter segments with geodemographic modelling. They combined a survey about how voters rank on about 100 social values - including ones related to the environment - with demographic and population segmentation data, to create postal-code specific estimates on the values.

They then analyzed how these voter segments measured up against EA’s database of social values of Ecological Concern and Ecological Lifestyle.

Ecological Concern is measured by “the belief that today’s environmental problems are a result of industrial and personal disregard for the environment” and that economic sacrifices to protect the environment are necessary.

Ecological Lifestyle is measured as “how willing people are to change their own choices around purchasing, including avoiding environmentally friendly products” and paying more to protect the environment.

Across the 15 voter segments analyzed, Environics Analytics found that while concern for the environment measured in both ecological concern and lifestyle was consistent across 11 segments, two population segments scored above average in the social values and two scored below average.

“Out of our 15 voter segments, there's a relatively consistent proportion across the whole population,” said Environics Analytics’ Rupen Seoni in a telephone interview with CTVNews.ca. “So this is an issue that has broad appeal, and what we're seeing with some of the polling is people are saying climate change is one of their top election issues.”

The two population segments who scored above average make up about 10 per cent of Canada’s population. They are young, professional, urban and well-educated voters that Environics Analytics dubbed “Jeunes en Ville” and represent three per cent of the Canadian population. They’re comprised of young people living in central neighbourhoods in Quebec’s cities.

“Young in the City” voters, who represent seven per cent of the Canadian population, live in English Canada’s larger cities. They had the highest score amongst all the population segments when analyzed for both ecological concern and ecological lifestyle, which means they are more likely to prioritize environmental protection even at the expense of economic growth, and are willing to pay a premium for goods and services deemed “good” for the environment.

Meanwhile, the two population segments who scored below average on the social values -- and were less likely to prioritize environmental protection over economic growth -- tended to be rural and older, and make up about 15 per cent of Canada’s population.

Dubbed by Environics Analytics as “Aging Heartland,” these are people who live in prosperous rural communities with maturing families or empty nesters. And “Older Rustic,” which consist of modest-income older couples in rural settings.

“These segments at the more extreme ends of the spectrum on environmental issues together make up about 25 per cent of the population,” Seoni explained.

“Now, when we actually play that into riding races, which is all about, ‘where do we think this could be an issue and where could it move some of the riding races in what looks to be quite a close election?’, we see some pretty interesting things here,” Seoni continued, adding that he focused on one of the environmental social values (Ecological Lifestyle) for his analysis.

“We found this pretty instructive to sort out which ridings could have some impact on the election in terms of which way these ridings might go, will they change hands, et cetera,” he said.

The 18 ridings with scores of 20 per cent and higher above the national average tended to be central-city ridings in Toronto, Montreal, Vancouver, Calgary, Ottawa and Quebec City. 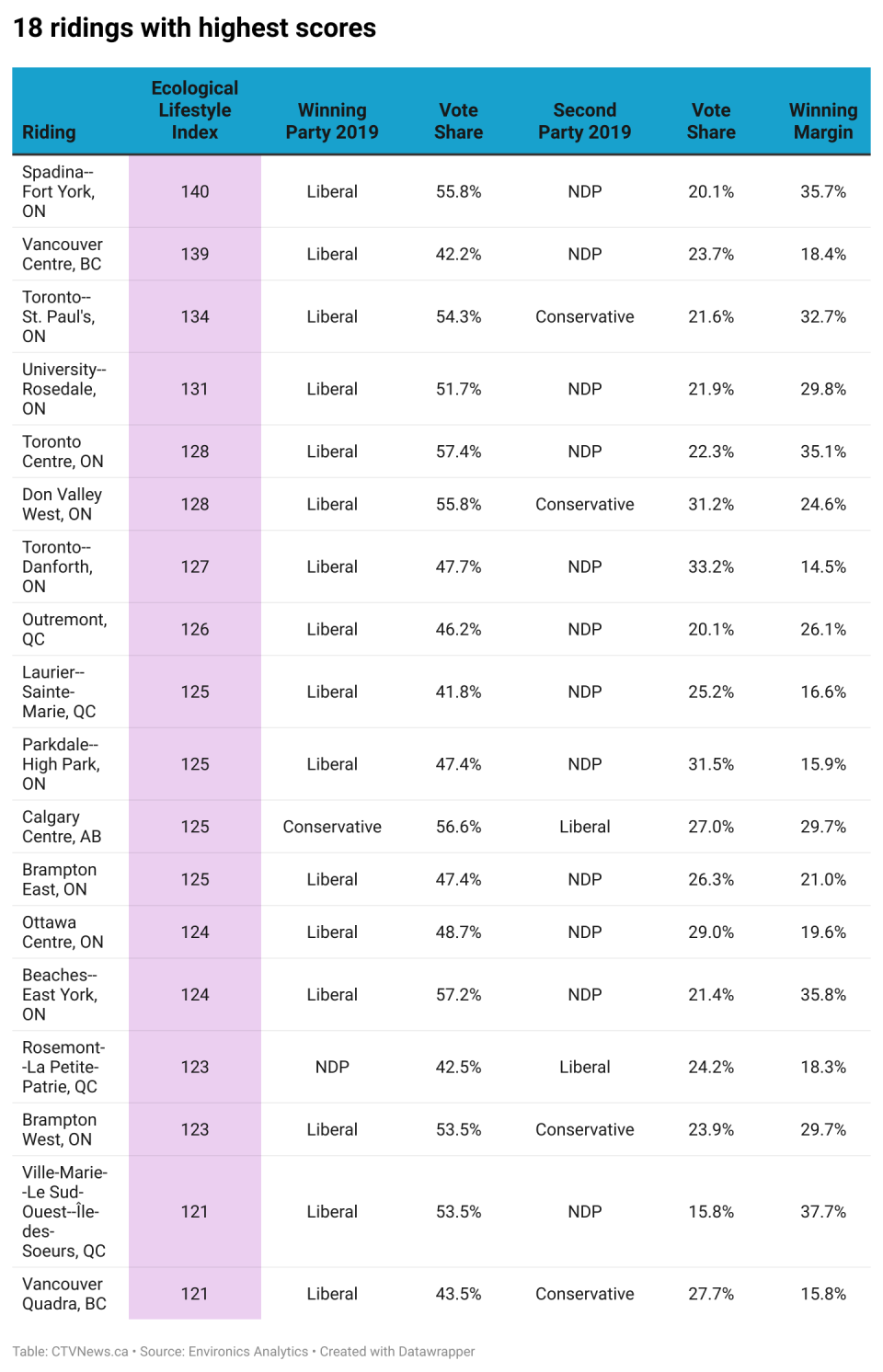 All but two were Liberal-held, and had been won by large margins. The NDP won second-place in most of the ridings, and out of the group of 18, the closest race was Ontario’s Toronto- Danforth – which the Liberals won in 2019 with a 14.5 percentage-point margin over the NDP.

A further 28 ridings had above-average scores on the Ecological Lifestyle social value, around ten to 20 per cent higher than the national average, were also found in big cities but in suburban areas.

In those ridings, such as King-Vaughan, Ont., Beauport-Limolou Que., and Nepean Ont., the close races in 2019 often had the Conservatives in second place. Seoni wonders whether the Conservatives’ better articulation of a plan around climate change could help move those ridings into their column.

Of the 29 ridings that scored at least 15 points below the national average on the Ecological Lifestyle social value, most were won by the Conservatives in 2019 by wide margins. Nine were won by the Liberals or NDP with smaller margins, which include Kenora, Ont., Labrador, Nfld., and Skeena-Bulkley Valley in B.C.

Environics Analytics estimates that the ridings which had close races scored above or below average on the Ecological Lifestyle social value may be the ones to watch in the upcoming election, as they signal that environmental issues may be the deciding factor in flipping the riding.

Here are those nine ridings where races were tight in 2019: 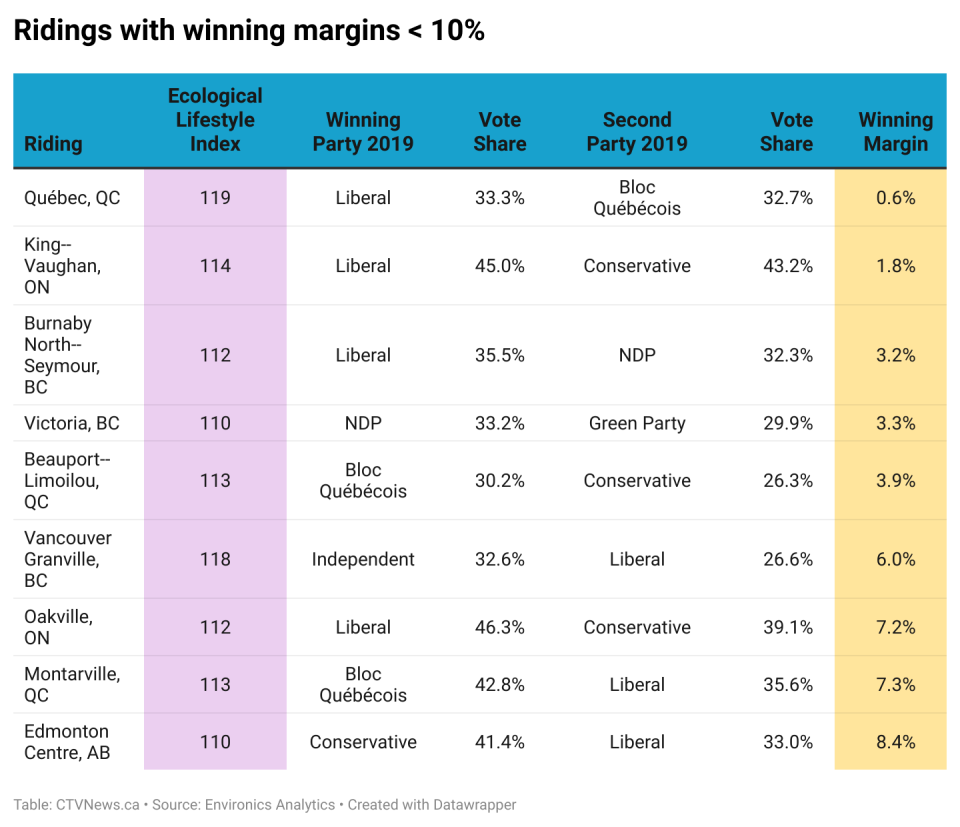 Below is a searchable map by Esri Canada that allows you to sort by which riding has the most or least ecological concern. Clicking on a riding in the table below will zoom into that riding on the map.

Click here for a full-screen version of the map

Fact checks and analysis of the English-language federal leaders' debate

Canadians with disabilities say they're missing from the election discussion

Catch up on what happened during the French-language debate

What do the parties need to do to form a majority government?

Everything you need to know about the 2021 federal election