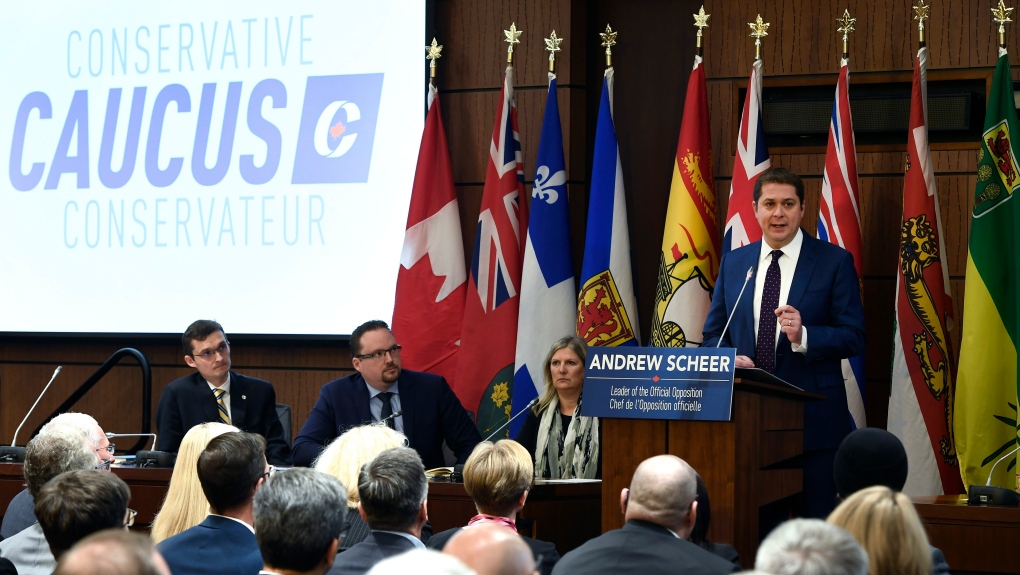 Conservative leader Andrew Scheer makes an address during a caucus meeting on Parliament Hill in Ottawa, on Wednesday, Dec. 4, 2019. THE CANADIAN PRESS/Justin Tang

OTTAWA -- Opposition Conservatives are looking ahead to the return of Parliament Thursday as an opportunity to change the channel after weeks of very public party in-fighting around the future of leader Andrew Scheer.

In a public speech to Conservative MPs and senators Wednesday, Scheer covered much of the same ground he's trod on for weeks following the October election: that Prime Minister Justin Trudeau is responsible for dividing the country, weakening Canada's reputation on the world stage and setting up dangerous conditions in the event of an economic downturn.

But, Scheer promised, something new will come with the resumption of the House of Commons: an emboldened Opposition that won't let do him whatever he wants.

"In this minority Parliament, we are putting him on notice," Scheer said.

"We are not going to let them get away with anything."

Scheer accused Trudeau of dragging his feet on bringing back Parliament, saying he was doing it in part because he feared the force of his opponents.

While the Conservatives may be styled "Her Majesty's Loyal Opposition," Canadians should understand where their loyalty lies, Scheer said.

"And when the prime minister puts his agenda ahead of the good of all Canadians he will indeed find himself opposed."

However Scheer himself is facing questions of loyalty and opposition from within his own ranks.

The failure of the Conservatives to capture a majority during the election has frustrated many within the party, who felt forming government ought to have been within their sights given the myriad scandals plaguing the Liberals.

Organized campaigns to unseat Scheer at April's party convention, or force him to retire ahead of that, have been launched and both prominent Conservatives and grassroots members have spoken out against the need for Scheer to change or go.

In recent weeks, he's been on a "listening tour" of campaign managers, failed candidates and volunteers, where common themes have emerged: the party failed to put forward and communicate a convincing climate plan, and that Scheer's socially conservative views were a liability.

Michelle Rempel, a Calgary MP, who has been outspoken about the rights of LGBT Canadians, said the party has to stand up for those issues more forcefully.

"I hope to work with our leader to find ways we can advocate for the community," she said.

Scheer has made some early changes, firing two members of his inner circle. He also appointed a former Liberal as his party's deputy leader last week.

Toronto MP Leona Alleslev crossed the floor to the Tories last year, and Scheer said she serves as example -- and ambassador to -- the people the party needs: suburban voters around big cities like Toronto who used to support Liberals.

Still, one of the most senior members of his caucus -- former Conservative cabinet minister Ed Fast -- also refused a spot on the Opposition front benches, saying Scheer deserved to be surrounded by those who fully supported him. Fast was Scheer's environment critic prior to the election.

Fast stopped short of discussing his own measure of support for Scheer, a position taken by many MPs who say the decision rests in the hands of the party's membership come April.

"Mr. Scheer got a mandate from supporters, volunteers, the members of our party," said Quebec MP Gerard Deltell on Wednesday.

"It is the members of the party that will decide what will happen."

B.C. MP Mark Strahl, who is counted among those in Scheer's inner circle, told reporters Scheer can and will hang on.

"We need to get back to doing the job that we were elected to do, which is to present a viable alternative," he said.

"The more that we can focus on that, the stronger our party will be."

Media have been invited in to hear the first portion of today’s Conservative caucus meeting. Meeting will set the tone for this upcoming session. @CTVNationalNews #cdnpoli pic.twitter.com/7HLOgzBopJ

This is the reception as Andrew Scheer enters the open caucus meeting. He will now give brief remarks while the media are here, then we will be asked to leave and the private portion will begin. pic.twitter.com/YKKG9XgbIq

Scheer says Canadians have given Trudeau “the weakest mandate in Canadian history.” Scheer goes on to say Conservatives are putting Trudeau on “notice.” “We will fight and then we will fight some more.”

Five MPs vying to be next House of Commons Speaker

Who's who: Complete list of Justin Trudeau's Liberal cabinet