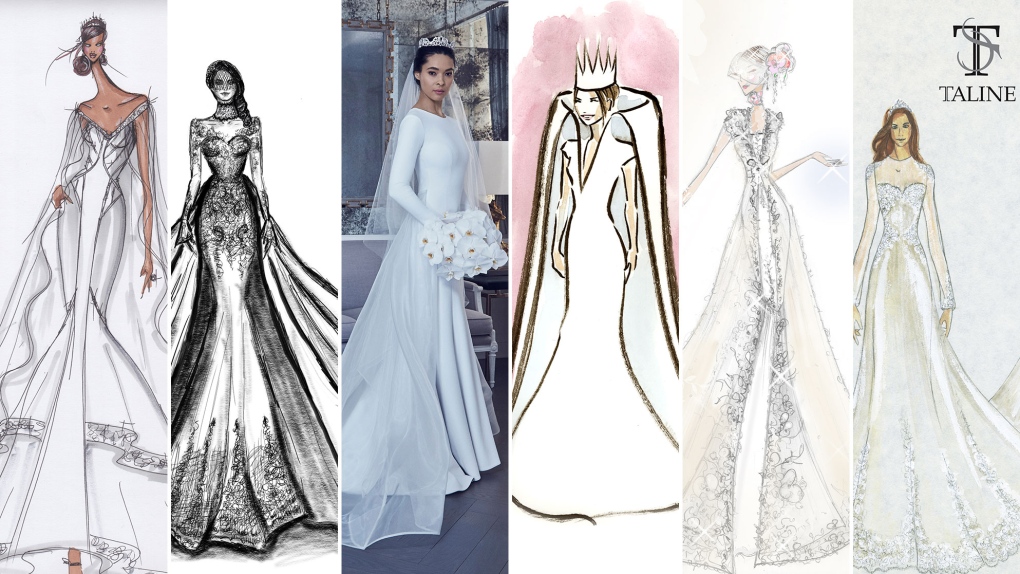 For many royal watchers, 2018’s most anticipated day is just around the corner, the wedding of Prince Harry and Meghan Markle. With the excitement of a royal wedding also comes plenty of speculation on what Markle will wear on her big day.

Markle herself has said in the past her ideal wedding dress is “whimsical” or “subtly romantic.” For her first marriage, to Trevor Engelson, she kept it simple and chose a white strapless dress with an embroidered belt. Will she go for something more dramatic this time around? CTVNews.ca spoke to several top designers who weighed in on what they envision the humanitarian will wear on May 19.

Keveza has confirmed to CTVNews.ca that she was asked by Kensington Palace to send in a sketch for Markle though the designer says she believes Markle should pick a British designer for the big day. 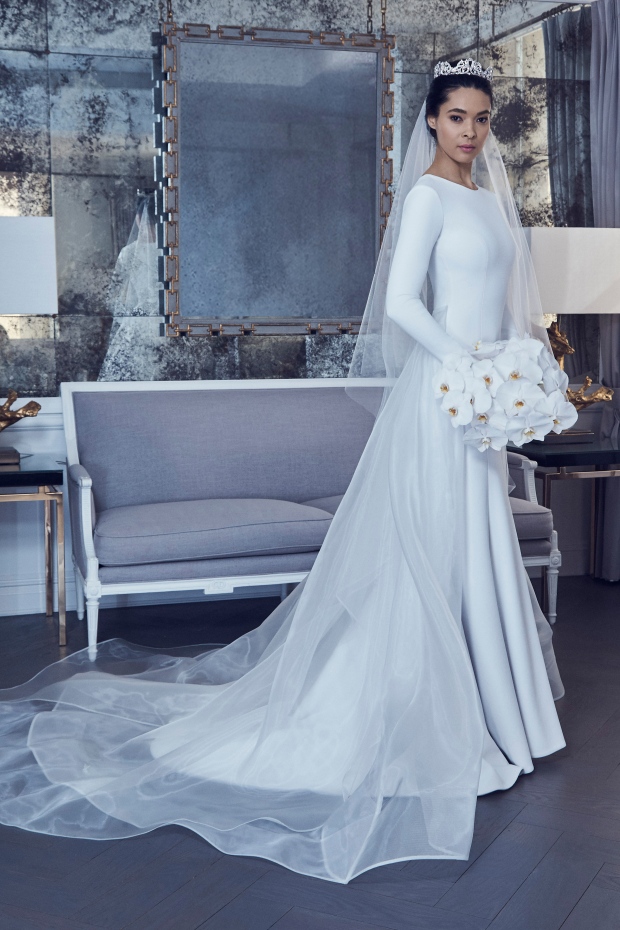 “It would be her way of embracing her new homeland,” Keveza told CTVNews.ca in a telephone interview. “I think it would be a lovely way for her to connect with the British people. “

Keveza guesses Markle may have chosen Stella McCartney as her designer.

As for what she sees Markle in on her wedding day, Keveza envisions the royal-to-be in a white crepe long-sleeved dress. Keveza predicts the dress will have a flowing silhouette, either an A-line or fit and flare.

“She enjoys wearing jewel necklines a lot and she has a beautiful figure so if you got it, why not flaunt it?” said Keveza.

She added, “Markle is quite sophisticated so I imagine that she would probably do a solid fabric as opposed to lace. I think she would avoid any comparison to Kate Middleton or Pippa’s dresses. Those were both lace.”

Keveza’s dress designs have also had striking resemblances to those worn by the Duchess of Cambridge Kate Middleton, her sister Pippa Middleton and the Princess of Monaco Charlene Wittstock at their weddings. In all three cases, Keveza’s designs were unveiled before the weddings took place, making her three for three when it comes to dress predictions. 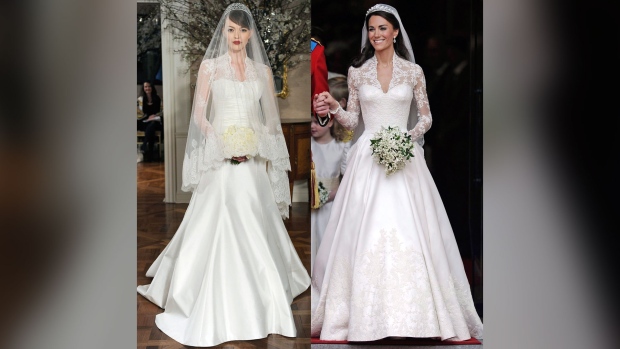 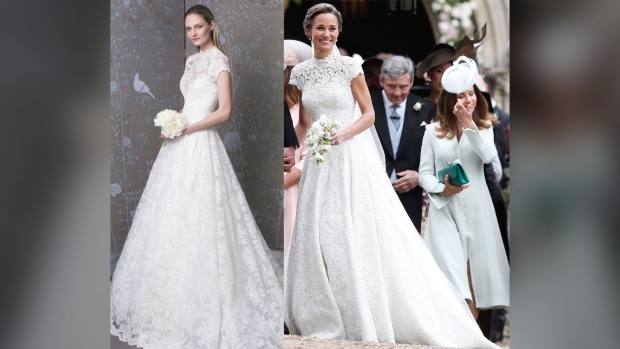 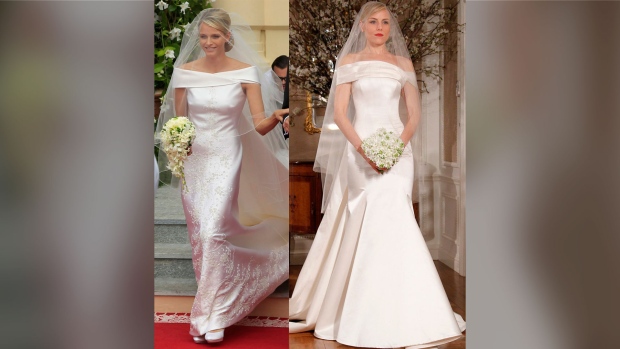 For Narces’ creative director Nikki Wirthensohn Yassemi, designing a wedding dress for Meghan Markle would be paying homage to her family. Wirthensohn Yassemi is now based in Toronto but was born in Austria and grew up in Iran and the United Kingdom before moving to Canada.

Her love for fashion developed in London as she watched her mother, Mita Moradi, work alongside Victor Edelstein who often made dresses for Diana, Princess of Wales.

Moradi even helped sew the iconic black dress Diana wore when she danced alongside John Travolta in 1986 at the White House gala.

“She is open to experimenting. I find that she tries different looks.”

Wirthensohn Yassemi sees Markle in figure-hugging ivory silk organza dress which comes with an added skirt to give the dress some grandeur. 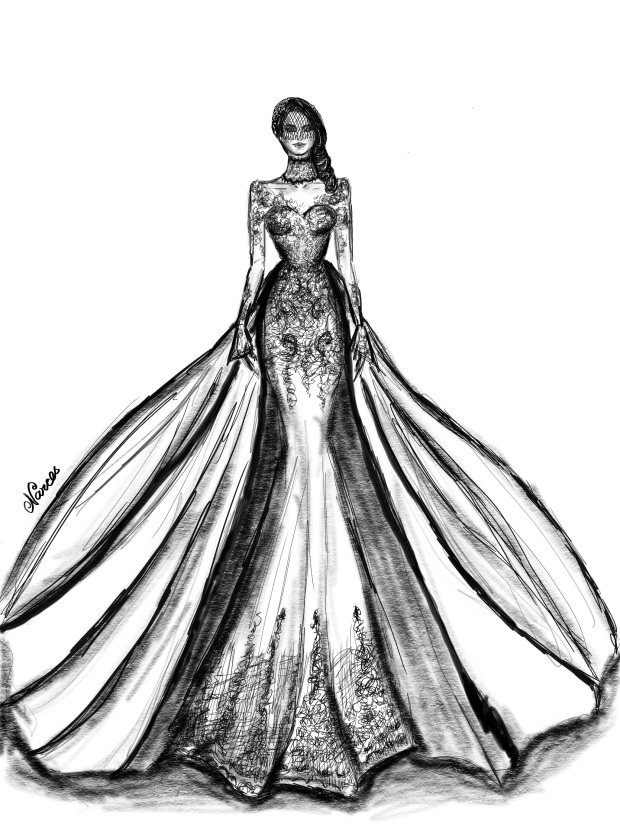 “I designed something that is figure-hugging because of what I see her in and then I designed that second part (the skirt) as an addition that goes over because it appears as a big ball gown to the fitted gown,” she said. “I think that’s a way to kind of have both types of dresses (in one).” 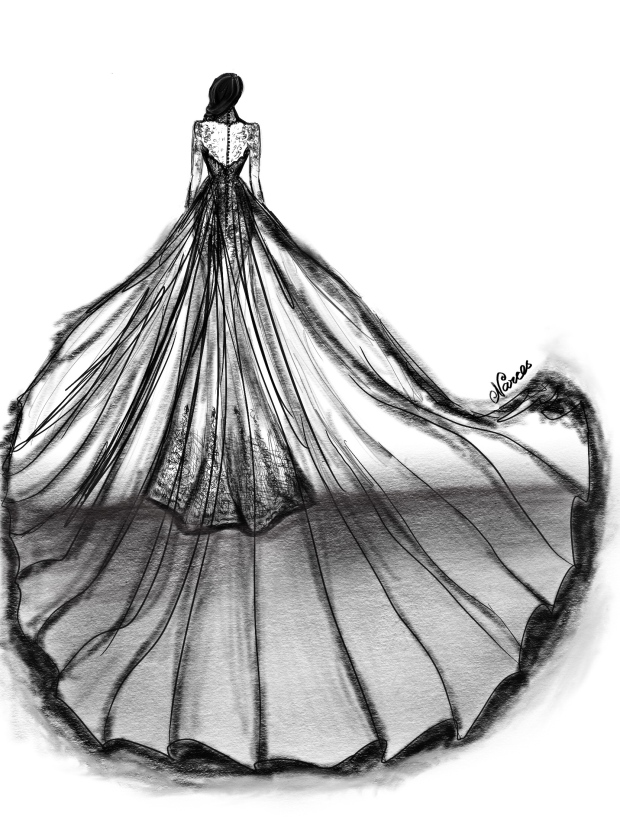 Torontonian David Dixon has had his designs featured on prominent celebrities such as Pamela Anderson, Meg Ryan and Jann Arden.

For Markle, he sees her in a regal but modern dress, again adding a cape for a princess touch.

“I designed a look with a fit and flair body in silk saille, with subtle beading and piping to emphasize her shape,” Dixon told CTVNews.ca.

“The attached silk chiffon cape is to give a nod to the regal, and the royal family. It is a mixture of traditional elements, with a sense of drama, fit for a modern princess to be." 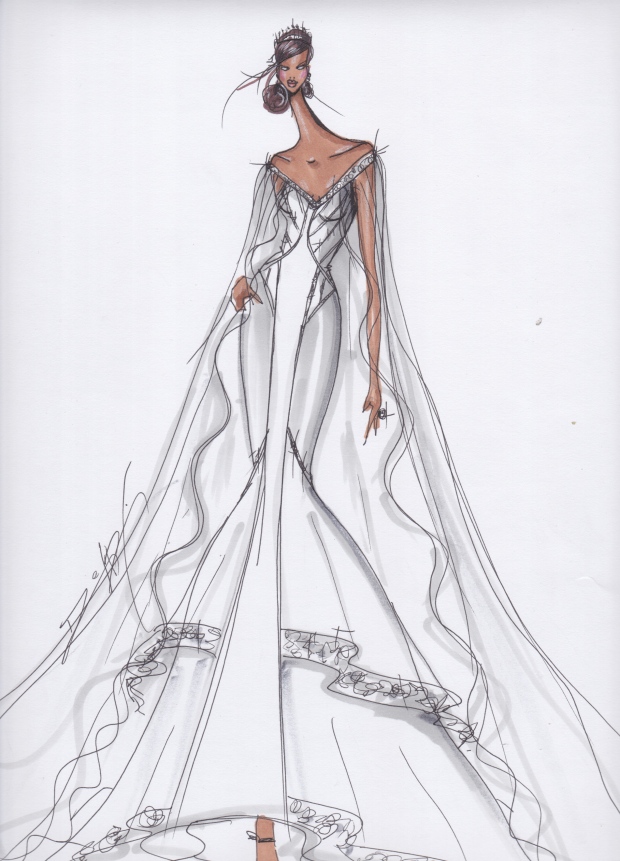 Kyriako Caras, designer with Stephan Caras Design, sees Markle in a romantic dress with embroidered chiffon and floral appliques. Caras’ father Stephan Caras is originally from Greece and was educated in Melbourne. He brought the company to Toronto and his son says his father’s work has influenced his own designs.

“I would try something less mechanical and less structured. I would do something more ethereal, more feminine,” said Caras. “She has a feminine, soft personality. She’s a really beautiful girl so I would highlight that with floral and soft designs.”

Caras says he envisions Markle in a structured fishtail dress with a large overlay.

“Something that is form fitting and I would incorporate a lace top with a dress underneath and a cap sleeve.” 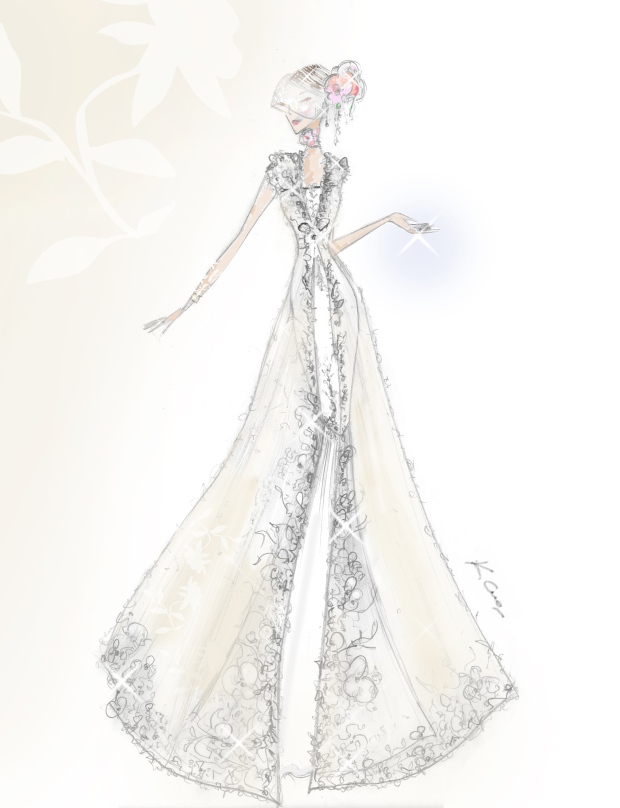 Still Caras adds that an additional skirt is a great way to give the dress some royal magic.

“We have the form-fitting dress underneath but I would open it up from the waist down with an overlay. She’d have the volume of a big gown and a princess look.”

Evan Biddell has been a staple in Canadian fashion since he won the first season of Project Runway Canada. He says Markle will look her best in a modern yet simple dress, one similar to the dress Pippa Middleton wore to her sister Kate’s wedding to Prince William.

“Something simple, hugging the body with some drama at the hem,” he said. “I wouldn’t try to outdo Princess Diana’s dress. I would keep it understated. Way more modern.” 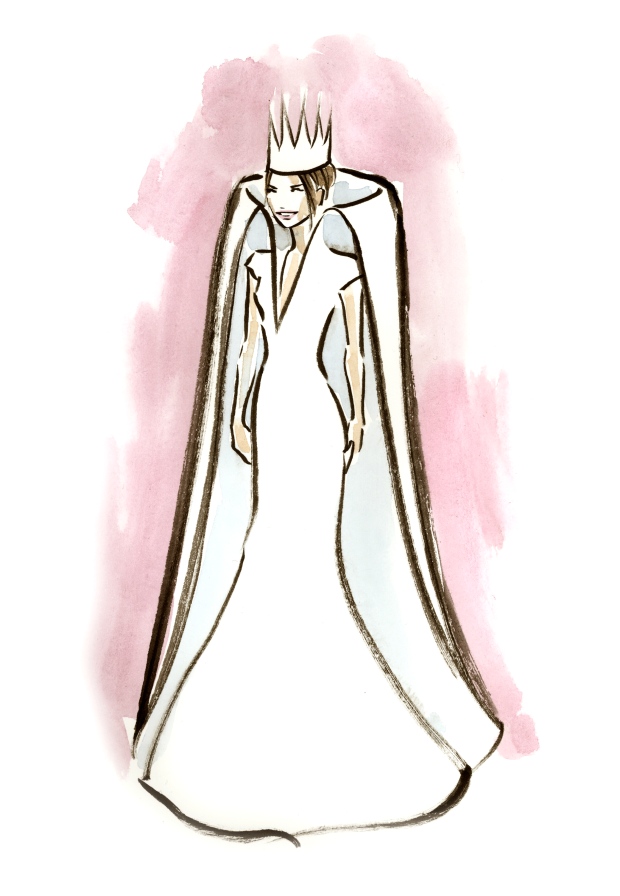 But like many of the other designers, Biddell says adding a cape to the dress (he envisions one made of silk gazar) gives the dress some extra drama.

Meanwhile, Toronto designer Taline Assadourian envisions Markle in two differing looks, depending on whether she decides to go with a classic or more modern look.

The first dress has a bodice-illusion neckline and is decorated with re-embroidered lace at the bust, waist, shoulders and sleeves.

Of the dress, Assadourian said, “The sleek, sexy, fit and flare gown made of layered silk organza shows off Meghan’s slender figure and accentuates her feminine curves. The bordered French lace hem further adds to the elegance of the gown as it trims the cathedral length train and draws your eye to the asymmetrical low-cut back bodice, covered in more re-embroidered lace.” 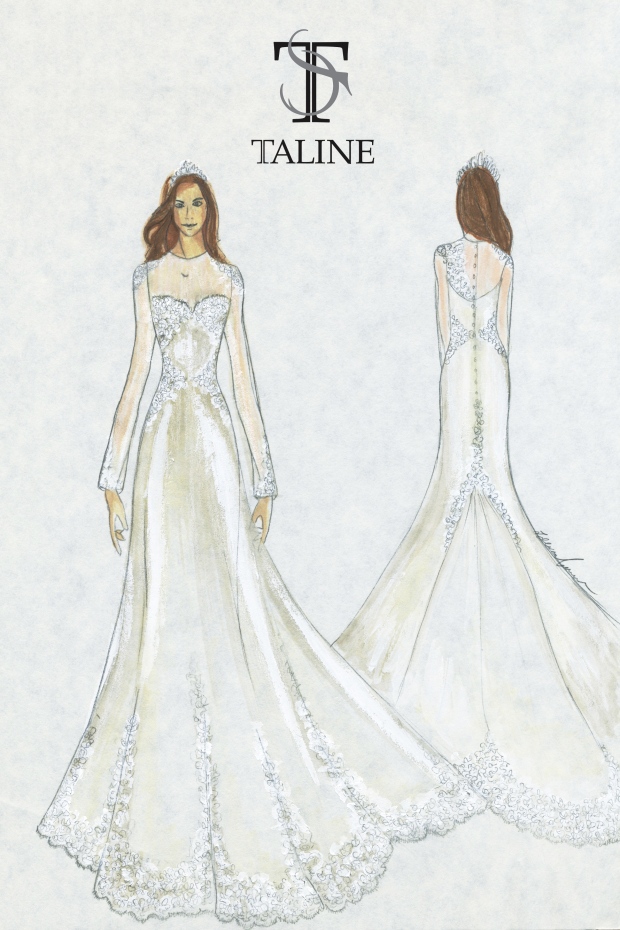 The second dress is more feminine, modern and trendy.

Assadourian said, “The pleated organza illusion high neck bodice is covered with scalloped lace embroidery on the bodice, front and back, as well as the cathedral train insert, which provides a dramatic finish as the bride enters the room.” 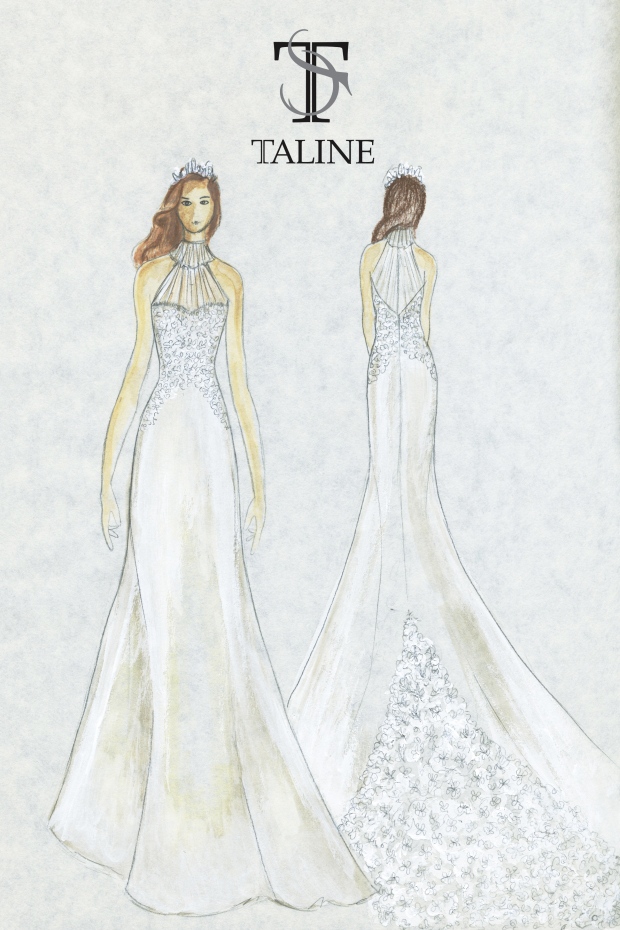