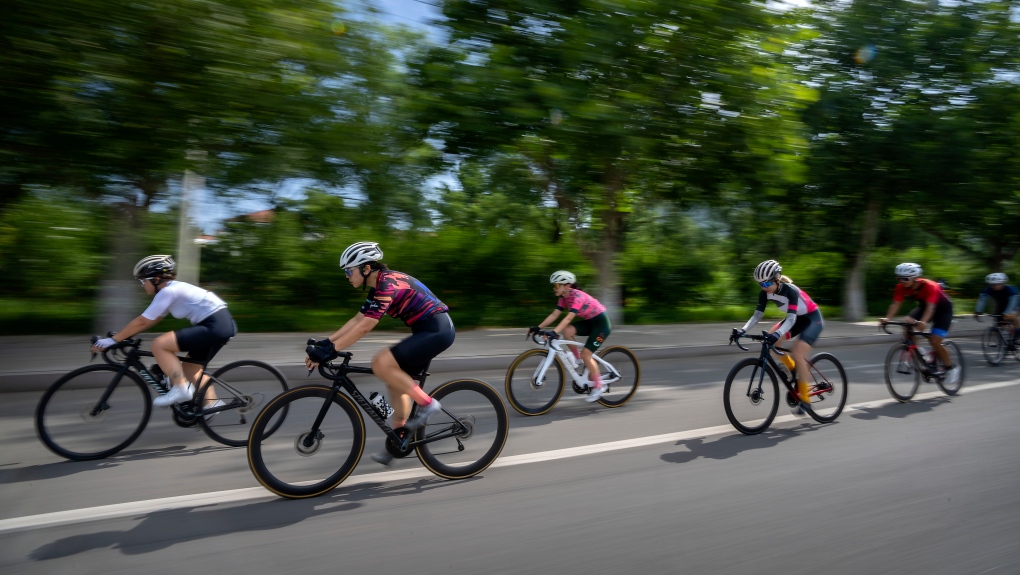 Yang Lan, second from left, and other members of the Qiyi bicycle club ride along a rural road during a group ride through the Baihe River Canyon in the northern outskirts of Beijing, Wednesday, July 13, 2022. (AP Photo/Mark Schiefelbein)
Beijing -

Lindsay Mo couldn't go to her gym after Beijing shut down indoor sports facilities in May because of a coronavirus outbreak. So she started cycling -- and soon fell in love with the sport.

"I realized a racing bicycle was quite different than a regular bike," she said. "It's very fast and exciting, and I couldn't stop anymore."

Bicycles have long been a means of transport in China and once outnumbered cars on city streets. Now cycling is increasingly also seen as a sport by an urban middle class that has benefited from China's growth into the world's second largest economy. What began as a niche sport about a decade ago has turned into a mini-boom.

Biking events organized by Beijing cycling club Qiyi tallied about 10,000 participants over the past year, with about 50 per cent of them regulars. Nationwide, at least 20 million people are participating in the sport, according to the Chinese Cycling Association.

The pandemic has played a role, with authorities moving quickly to close non-essential businesses -- including gyms -- during outbreaks under a strict zero-COVID approach. Cycling, which can be done individually as well as in groups, has largely been free from restrictions that limit gatherings, especially indoors.

Rides organized by cycling clubs or individual cyclists in Beijing take enthusiasts to outlying mountainous areas or by city landmarks including Tiananmen Square.

For cyclist Yang Lan, the sport also provides an escape from the daily hassles of life in the coronavirus era. "With the pandemic ... it seems to be the only way for us to run away from the terrible city life and pace," she said.

On a recent summer morning, Yang and 14 other cyclists biked along the Baihe River Canyon in rural northern Beijing despite the heat and humidity.

In full cycling gear, they pedalled their racing bicycles hard on both level roads and slopes, sweating through a ride of more than 70 kilometres while enjoying spectacular views.

Pedaling herself forward under her own efforts gives Yang an incomparable pleasure not to be gotten from riding a motorcycle or driving a car.

"It gives you a stronger sense of integration into the natural environment around you, so I find it more interesting," said Yang, who started cycling in February, in the dead of winter, when she was looking for something new.

"Especially after the pandemic, people have a desire to walk out of rooms and buildings to do sports outdoors," Feng said.

Naturally, the trend has boosted the demand for bicycles.

American bicycle brand Specialized says its Beijing stores' sales rose 20 per cent to 30 per cent from March to June, compared to the same period a year earlier. It would be twice as large an increase if not for a shortage of bike products, said He Dong, who is in charge of the Beijing franchised dealer of Specialized.

China's bicycle market size stood at 80 billion to 100 billion yuan (US$12 billion to US$15 billion) in 2021, said Zhou Fuyuan, founder of Magic Cycling, an online bicycle information platform in China. Sales are forecast to reach US$16.5 billion by 2026, according to online data published by Research and Markets, a market analysis firm.

Surging demand and global supply chain issues mean those wanting to buy bicycles, particularly beginner or medium-level cyclists, must wait weeks or months to get a new cycle. For every Specialized model sold in Beijing at least 10 customers are waiting for their bikes to arrive, He said.

Some choose to pay more for whatever bicycles are in stock. Joanna Lei doubled her budget and spent 60,000 yuan (US$8,900) on her first racing bicycle. She said the money was better spent than on a luxury bag.

"What you are investing in is your own body and a very good workout habit," she said. "I think it's more valuable than clothes that you wear or handbags that you use."

People will have more choices for sports and entertainment when the pandemic is over, but Feng says he expects cycling to remain popular because it's driven by China's growing affluence, growth of the sports industry and increased concern about their health because of COVID-19.

"The pursuit of health will not vanish, so I think there is a good prospect for the sustainability (of cycling)," Feng said.

The sport's popularity is also a sign of the public's growing awareness of environmental protection and pursuit of a low-carbon lifestyle.

"Such a lifestyle is probably healthier and is more beneficial to society." Yang said. "I think people now have a good sense of environmental protection and hope to do good for society."