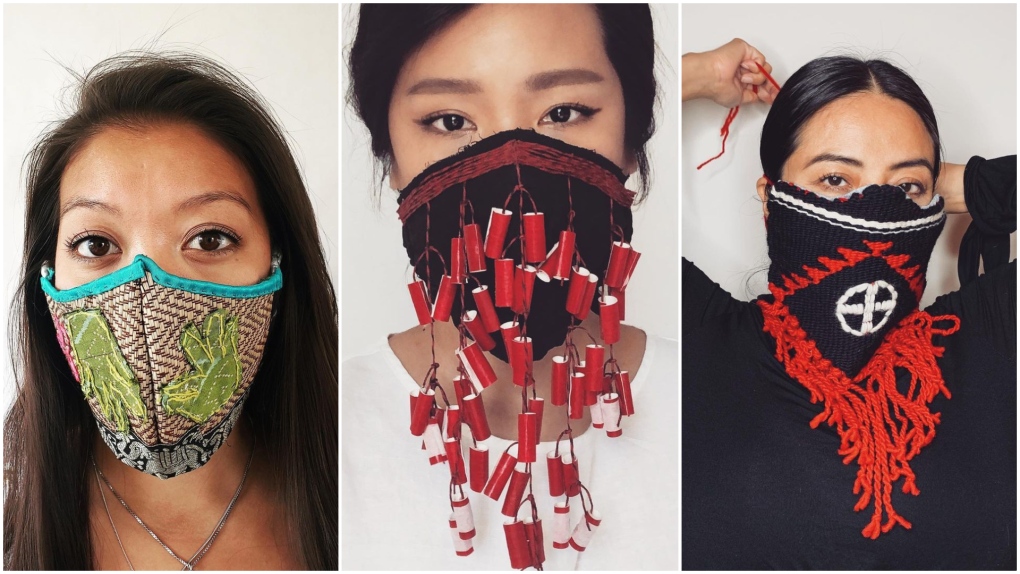 The 'collective hurt' of Indigenous and Asian people is inspiring a crowdsourced mask collection, with some designs featuring dragons, dynamite, and hands symbolizing for missing and murdered Indigenous women. (Courtesy of NDNxAZN)

TORONTO -- The “collective hurt” of Indigenous and Asian people is behind a new crowdsourced mask collection -- with some designs featuring dragons, dynamite, and hand symbols associated with missing and murdered Indigenous women.

Anyone from around the world can submit their mask designs to the NDNxAZN mask project, which pairs artists from both cultures to create art based on their pandemic experiences.

“This project is about how we can raise each other’s voices and each other's issues, so people can know that it’s happening,” project’s creator Tania Larsson told CTVNews.ca during a joint video interview with other organizers.

A mask design by Tiffany Wong used red, miniature dynamite sticks, to symbolize her Chinese culture but also how Asian and Indigenous communities were killed and displaced as railroads were built across North America. A trauma she said continues with Chinese and Indigenous people being disproportionately affected by COVID-19.

Larsson, a Gwich’in jewelry designer in Yellowknife, said “sometimes it feels like we’re screaming to the world, but only our community is hearing about it.”

According to the group’s website, artists are encouraged to use “mask coverings to represent our ancestral practices and wisdom, but also to demonstrate how Asian and Native women are often silenced.”

The idea behind the project was sparked last April when Larsson connected with a friend from Texas named Kiona P, who posted on Instagram about how anti-Asian hate crimes in the U.S. had outnumbered COVID-19 deaths at the time. After some brainstorming, they both felt face coverings were an obvious canvas for art.

“Mask wearing in East Asia is a sign of politeness. A mask is worn when sick to protect others from germs. This practice started long before the COVID19 pandemic,” Larsson’s friend wrote on her NDNxAZN artist profile, describing her red and yellow dragon snout mask, which was inspired by her Korean background.

However, despite their early mask use, Korean, Chinese and other Asian people were targeted during the first wave of infections. Last year, there were dramatic spikes in Anti-Asian hate crime in Canada and the U.S. -- with the Vancouver Police Department alone reporting a staggering 878-per-cent jump from 2019.

Meanwhile, a spike in infections in First Nations communities has been troubling for remote communities, who are more at risk; with the pandemic serving to exacerbate ongoing issues, such as inconsistent access to clean water.

“I know everyone is trying to survive this pandemic… but we also had so many other things to worry about,” Larsson said, referring to how certain people of colour had to worry about racism and systemic issues on top of avoiding COVID-19.

Melaw Nakehk'o, a Dene and Dënesųłiné artist based out of Yellowknife wanted her mask to juxtapose that marginalization with the beauty of spring at the time.

“There was this collective hurt... [yet], as that was happening, I was seeing all these flowers blooming because it was spring time,” she told CTVNews.ca in a phone interview.

She hopes her mask, emblazoned with colourful flower designs and made using traditional moose hide tanning techniques, showcases hope and the idea of groups sharing trauma together.

SOLIDARITY WAS A BIG THEME FOR ARTISTS

Jennifer Younger, a Tlingit, Eagle Kaagwaantaan artist from southeast Alaska, drew on a similar theme, featuring the Chinese symbol for “strength” on her turquoise copper-lined mask – a material that symbolizes cultural nourishment to the Indigenous people of the Northwest Coast.

And that idea of solidarity and resilience was directly incorporated into mask design themselves.

“A single strand of ribbon can’t hold a lot of weight, but once they’re woven together they can create a stronger foundation,” Korina Emmerich said, describing how she combined traditional cedar weaving techniques with red ribbons to create her mask. The colour is also meant to connect with missing and murdered Indigenous women, trans, girls and two-Spirit people.

“It’s often said that red is the colour that can be seen by our ancestors and it’s a way to call back those spirits,” said Emmerich, a fashion designer with Puyallup heritage, a Coast Salish Native American tribe in Washington state.

Every mask has a personalized page for the artist featuring issues and links to causes they want people to know about and support.

Emmerich wanted to highlight how she felt lingering colonization affected what work was deemed essential during the pandemic, such as the oil work being done on and near Indigenous lands; and the role that associated man camps -- temporary housing for pipeline construction workers – had on exposing Indigenous people to the virus and driving up an increase in rape and sexual assault.

Some artists said recent marginalization should be drawn further back in history. Jolene Chee, a Diné woman from the Tł'ízí Łání clan in Diné Bikéyah (Navajo Reservation in Arizona), lined her masks with maps of the Transcontinental Railroad and the Santa Fe Railroad in the U.S.

Her collaborator Tiffany Wong, a Chinese-American artist based in Chicago, who designed the dynamite mask, also incorporated the railway design in her mask. She said “it was amazing to collaborate with the invited artists.”

Wong said the NDNxAZN project is currently in talks with two museums to feature their collections physically and online. But, because she said it’s rare to see that type of cross-cultural solidarity in art, she hopes people continue sending in submissions to “stretch the imagination of the public of [how] Asian and Indigenous cultures can be highlighted.”