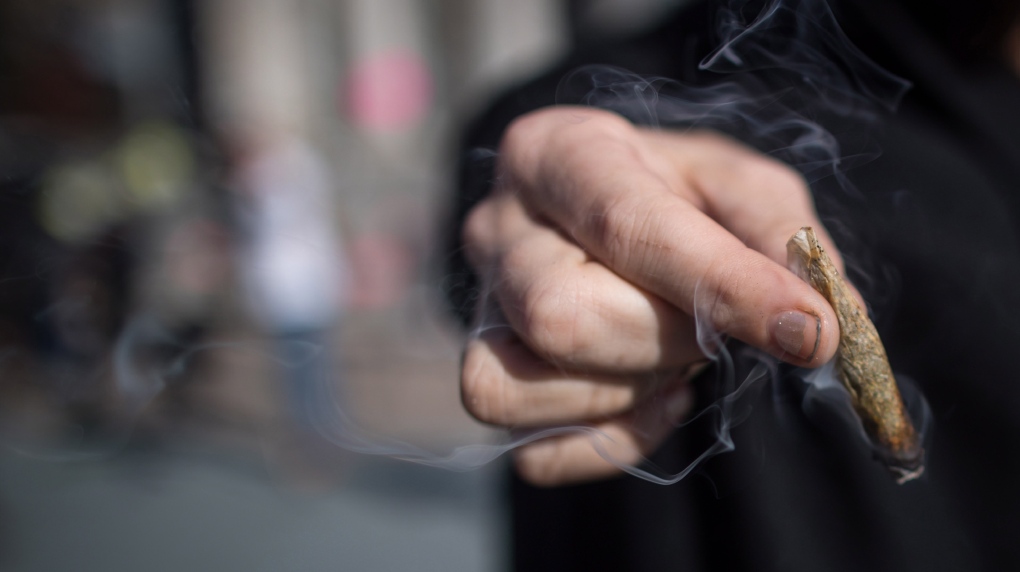 A man holds a joint while smoking marijuana to celebrate the legalization of recreational cannabis, in Vancouver, on Wednesday October 17, 2018. (THE CANADIAN PRESS/Darryl Dyck)

TORONTO -- Though marijuana is often associated with stress relief, a new Canadian study of young cannabis users found an abundance of a brain protein associated with the opposite: more stress and anxiety.

The research, published Wednesday in the journal JAMA Psychiatry, begins to shed more light on potential effects of cannabis use on developing brains.

Researchers found that young cannabis users had higher levels of the brain protein 18-kDa translocator protein (TSPO) than non-users. That same protein has been linked to brain inflammation and associated with depression and Alzheimer’s disease in other research.

Participants with “cannabis use disorder” — those who exhibit a greater dependency on the drug — had the highest levels of the protein. All cannabis users, most who used the drug daily, also reported more experiences with stress and anxiety than non-users.

“I cannot say that cannabis causes anxiety or stress,” clarified the study’s senior author Dr. Romina Mizrahi in an interview with CTVNews.ca, noting that further research is planned to understand if there is a causal relationship between the drug and anxiety.

Using technology developed at the Centre for Addiction and Mental Health in Toronto, a group of 24 young long-term cannabis users were compared with 27 young non-cannabis users. The researchers hypothesized cannabis users would show low levels of “neuroinflammation biomarkers,” including the protein TSPO, since cannabis and its components are regularly used to treat inflammatory conditions.

Instead, they found the opposite. “Having a hypothesis disproven this clearly is rare, but this is a strong finding,” said Mizrahi in a statement.

The study is the first to look into an association between cannabis use and brain function, but does not prove a link between cannabis and anxiety. The research doesn’t explain why there are such high levels of the protein in question. Mizrahi and team plan to launch a new study to investigate whether the protein and stress and anxiety go back to normal levels after cannabis use ends. “This would help us move forward into a causal relationship,” she told CTVNews.ca in a telephone interview from Toronto.

Cannabis use and its effects on still-developing brains remains a relatively new field of research. With last year’s legalization across Canada, and the upcoming legalization of cannabis edibles, the drug will continue to be scrutinized.

“Cannabis is the most commonly used illicit drug in the world but we know very little about the impact it has on the brain, especially in young users whose brains are still developing until the age of 25,” said Mizrahi in a statement. “These findings are an important step forward in understanding the role of cannabis in the brain.”

This is the first study to investigate an association between cannabis & neuroimmune function in the brain.
“These findings are an important step forward, but more studies are needed to better understand the role of cannabinoids & neuroimmune signaling,” says Dr. Mizrahi pic.twitter.com/Mkfo4nf0Qz

It's important to consider that this study does not suggest a correlation or causation between cannabis use & stress/anxiety, but that there is an association via a specific protein 'TSPO'. Further research & evaluation will be needed to understand these findings.