'Racism is a comorbidity': Advocates call out anti-Black bias in Canadian medicine 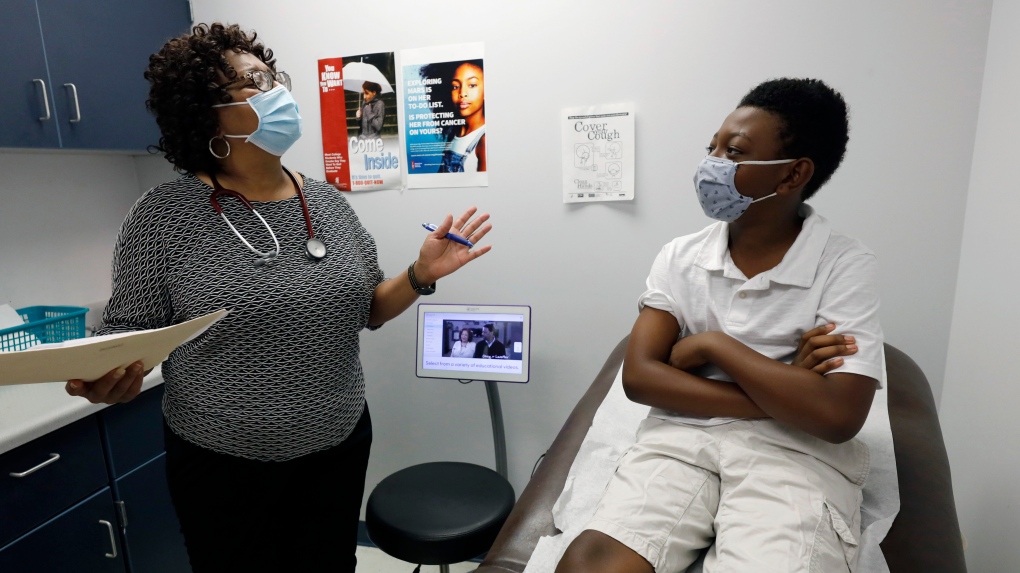 “The field of medicine can no longer deny or overlook the existence of systemic anti-Black racism in Canada and how it affects the health of Black people and communities,” wrote OmiSoore Dryden of Dalhousie University and Onye Nnorom from the University of Toronto in a commentary published Monday.

“It really is about, as health-care providers, turning the mirror to ourselves,” Nnorom, a public health physician and a family doctor, told CTVNews.ca in a phone interview on Monday.

In the piece, she and Dryden call out groups including medical organizations, clinicians, nurses and medical schools, arguing unaddressed racism and structural inequalities has directly led to substandard care.

During the COVID-19 pandemic, those effects have been magnified with racialized people having a greater chance of testing positive for COVID-19 and a poorer health outcome.

Nnorom urges Canadian doctors and medical staff not to be colour-blind with Black patients and instead, see their race “but understand the implications of systemic racism and treat the patient with compassion and dignity.” And this in turn will only allow a better framework to treat patients of other racial and cultural identities.

“I cannot imagine discussing it any other way,” Nnorom said. She said the issue of racism is pervasive. Years ago, during Nnorom’s own medical training, health disparities in racialized groups were “always framed as if there is something wrong with the community.”

It was blamed on culture, habits or genetics. And it took her years to shake that mindset off.

THE PAST REFLECTED IN TODAY: ARTICLE

Nnorom and Dryden’s piece describes historical myths, which perpetuated slavery and mistreatment of Black people in Canada andinstilled the false idea “Black people were biologically different or subhuman, less intelligent, had a greater tolerance for pain and were not to be trusted, among many others.”

And the “legacy of the past is very much present” in the modern-day, Nnorom said, explaining that it could manifest in subtle ways, such showing less empathy during bedside interactions.

But it could also play out on a larger scale, with Black people being overly monitored, doctors or nurses assuming the patient doesn’t understand the treatment, or not taking Black patients’ concerns seriously or with suspicion.

“And on the patient end, because of experiencing institutional barriers and every-day biases, they too might not trust a physician or a health-provider because of their lived experience in Canada,” Nnorom added.

If a patient, for example, doesn’t come back or follow a doctor’s orders, it’s not because Black people are less compliant, Dryden said. “Something may have happened in the clinic, on the job, in between appointments,” she said, adding that finding out what happened and if race or socio-economic issues and biases played a role, should be part of regular care.

“Even though your patient may not be able to fully articulate all the ways that anti-Black racism affects them on the daily -- we need to consider anti-Black racism as a comorbidity,” she urged doctors, calling on clinicians to do “greater work” to enhance understanding of how connected racism is to a person’s overall health.

“Yes, this Black person’s blood pressure is high but they’re dealing with racism every day and we know that racism has a physiological effect on the body, Dryden said, describing a hypothetical scenario.

The origin of the piece in Canadian Medical Association Journal predated the Black Lives Matter protests this past year. But Dryden said widespread conversations about systemic racism meant discussing it in regards to the medical field, “people felt more open about having conversations on that.”

ENOUGH DATA TO GET STARTED: AUTHORS

Although the authors reiterate the need for more collection for race-based data in Canada, they argue there’s enough to at least show how anti-Black racism disproportionately sends Black patients into hospitals and are more likely to receive worse than other groups.

“On one hand, you want to take direction from leading experts both inside and outside of the medical profession but you also want to make sure you’re paying attention to the conversations that Black people are having: in your patients and in your own communities,” Dryden said.

Throughout the piece, the authors point to colleagues’ work, including the exhaustive Black Experiences in Healthcare Report 2020, which outlines prejudices and barriers Black Canadians have faced; and, The United Nations Working Group of Experts on People of African Descent, which notes Black Canadians “continue to live in poverty and poor health, have low educational attainment and are overrepresented in the criminal justice system.”

Nnorom said administrators and people running institutions must realize reading these and other reports and peer-reviewed studies, “which have largely gone ignored,” is simply the first of many steps.

“Start to hold town halls or find ways to reach out communities to understand what the needs are of Black communities -- what their experiences are,” she said, adding that people needed facilitate ways to “create space for greater representation and equity.”

And on top of that, this also means turning to anti-racism consultants, especially when issues that Black doctors and patients bring up, require a dedicated game plan.

This will led to outlining specific agendas and policies to show a change in work culture and staff education, so that health care better serves Black and other marginalized communities.

WORK ON THE GROUND

Dryden and Nnorom highlighted the work being done on the ground, including the ongoing reform strategies from the Black Medical Student Association of Canada, which address holes in medical school curriculums and admissions.

The impact of ongoing anti-Black racism work is not lost on Black medical students like Seana Adams, a second-year medical student at the University of Toronto.

“I mean, to make it to this point was a huge achievement. I just found that least we could do is to continue to amplify the voices of the people where we came from,” Adams, a senior executive member of the Black Medical Students’ Association at the school, said. She called it a “huge disservice” to do otherwise.

As part of the first cohort of U of T’s Black Student Application Program, created in 2017 to redress how only one Black medical school student was accepted in the prior year, she knows first-hand the need to continually push the ball forward, in the way Dryden and Nnorom are putting forth.

Adams has run forums on navigating disparities in Black mental health; helped put out an unofficial guide to getting in medical schools; and spurred on medical schools across Canada to redress the chronically low number of Black students they admit.

She described how community advocacy groups fighting anti-Black racism, such as community health centres and the Zero Gun Violence Movement (who have outlined the urgent need for more Black physicians) have been “screaming into a void for decades.”

Nnorom commends people, such as Adams, taking the initiative themselves to do their part when it comes to reframing better health outcomes by acknowledging race.

“Young people in medicine especially are learning that we need to look at the field of medicine and to view public health and what harm is being caused, so that we can address it,” she said. “We do see this as a time of self-awareness in medicine and health care and for change.”