One in seven Canadians experiencing food insecurity during the pandemic: report 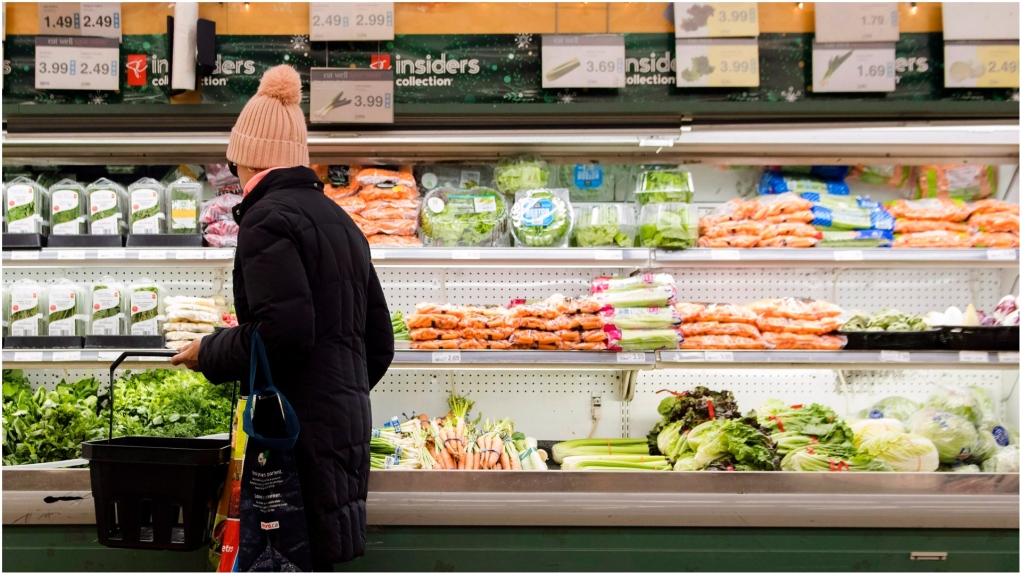 A women overlooks produce in a grocery store in Toronto on Friday, Nov. 30, 2018. THE CANADIAN PRESS/Nathan Denette

TORONTO -- The number of Canadians who struggle to put good food on the table is increasing as a result of layoffs and the economic downturn caused by the pandemic, according to a new report that examined the impact food insecurity has on people’s lives.

The report, which was released Tuesday by the non-profit Community Food Centres Canada (CFCC), said that before the pandemic, an estimated 4.5 million Canadians experienced food insecurity, which the non-profit defines as inadequate or insecure access to food due to financial constraints.

In the first two months of the global outbreak, the CFCC said that number had grown by 39 per cent, meaning food insecurity affected one in seven people, particularly those in low-income and BIPOC communities.

“During the pandemic, food insecurity has increased across the country, making this issue more urgent than ever. With COVID surging, layoffs mounting, and a hard-hit economy, the problem is sure to worsen,” Nick Saul, the CEO of CFCC, said in a press release Tuesday.

Sasha McNicoll, a senior policy specialist at CFCC, said the pandemic has exposed some weaknesses which need to be addressed in the country’s social safety net.

“I think that we need to be thinking long-term about some of the changes that need to be permanent,” she told CTVNews.ca during a telephone interview on Wednesday. “We need to find a way to recover from this in a stronger position.”

The non-profit attributes Canada's food insecurity problem to several systemic issues, including a “frayed social-safety net,” the rising cost of living, racism, and an abundance of precarious, poorly paid jobs.

McNicoll said single adults who live alone are particularly at risk of being food insecure.

“More and more people are actually living alone and having to shoulder the cost of a household on one income and we’re starting to see that single adults are really the people who are falling through the cracks of the social safety net,” she said.

The senior policy specialist added that racism and the lasting effects of colonialism have also made certain segments of the population more vulnerable.

“For example, if you are a Black Canadian, you have almost a 30 per cent chance of being food insecure compared to, I think it's 11 per cent, for non-racialized people,” she said. “Even when you take into account income, whether somebody owns or rents their home, household composition, Black Canadians are almost twice as likely to be food insecure as white Canadians.”

In an effort to shine a light on the far-reaching consequences of food insecurity, the CFCC recently surveyed 561 individuals across the country about how it’s affected their lives.

According to the findings, 81 per cent of respondents said food insecurity takes a toll on their physical health. The report said people affected by food insecurity are more vulnerable to chronic conditions, such as heart disease, hypertension and diabetes, and have less access to nutritious food, such as fruits and vegetables.

The CFCC also found that those who are food insecure are up to five times more likely to not take their medications as prescribed, often because they don’t have food to take them with.

The report also found that 79 per cent of respondents said their mental health had been negatively impacted by food insecurity. The CFCC said inadequate access to good food can lead to increased instances of depression, anxiety, mood disorders, and suicidal thoughts.

Nicola Moore, a single mother of three from Hamilton, shared how food insecurity has affected her mental well-being. She said she is constantly thinking about how she’s going to feed her children.

“It takes up so much head space. It affects my sleep, my mood and my health. And I know that this can cause depression,” she said in the report.

Moore, a singer-songwriter who also works as a peer advocate at the Hamilton Community Food Centre, called food insecurity a “huge stressor” in her life.

“I’m meal-planning, watching sales and using free programs to assist with my food budget. I just think of the activities I could be doing with my family if I didn’t have to spend all my time thinking about food,” she said.

For children experiencing food insecurity, the report said they’re at risk of hyperactivity, inattention, and are more likely to have mental-health challenges as adults.

Beyond the impact on people’s physical and mental health, the report said that 57 per cent of respondents found it difficult to find and secure a job as a result of their food insecurity. One respondent said they don’t have the mental or physical energy to go out and find a job because they’re always hungry.

“When you haven’t eaten for days, you don’t feel motivated to get up and look for work. You’re just thinking about food,” the individual said.

Some respondents said food insecurity has affected their self-esteem and confidence to look for work, while others said they couldn’t afford some of the costs associated with maintaining a job, such as transportation, childcare, and work attire.

“What we heard overwhelmingly is that it affected every aspect of their life and made it so much more difficult to move forward to find and keep a job or to move their life forward in any kind of way,” McNicoll said.

The survey also found that individuals experiencing food insecurity reported that it limits their ability to participate in social activities (58 per cent), erodes their relationships with friends and family (64 per cent), and curtail their ability to celebrate their culture (46 per cent).

“It’s easy to get lost in the numbers, but what really matters is that people all across this country have told us they’re struggling. As a society, we need to listen and take action,” Saul said.

The action Saul seeks is laid out in several policy recommendations the CFCC report lays out for the federal government. They include investing in income supports for low-income Canadians, setting targets to reduce food insecurity, enhancing social programs to make life more affordable, and ensuring Statistics Canada reports on the problem annually and collects better race-based data.

The CFCC also asked the government to take steps to make sure that progress on food insecurity is achieved equitably in partnership with Northern, Indigenous, and Black communities who have been disproportionally affected.

“We need to just make sure that all of the all of the interventions that we're making on food insecurity are equitable and are reaching the people who are most likely to be food insecure, like racialized and Indigenous Canadians, like single mothers, and all the other groups that are that are disproportionately experiencing food insecurity,” McNicoll said.

Lastly, McNicoll encouraged the public to read the report and take action by calling or writing their local MPs to tell them this is an urgent problem that needs to be addressed with policy changes.

“We’re not going to solve this problem with food charity,” she said. “Income is really the solution to this. People need to be able to afford to make the food choices that they need to make for themselves and their families.”

Why did B.C. have far fewer COVID-19 deaths in long-term care than Ont.?

U.K. experts warn coronavirus is out of control