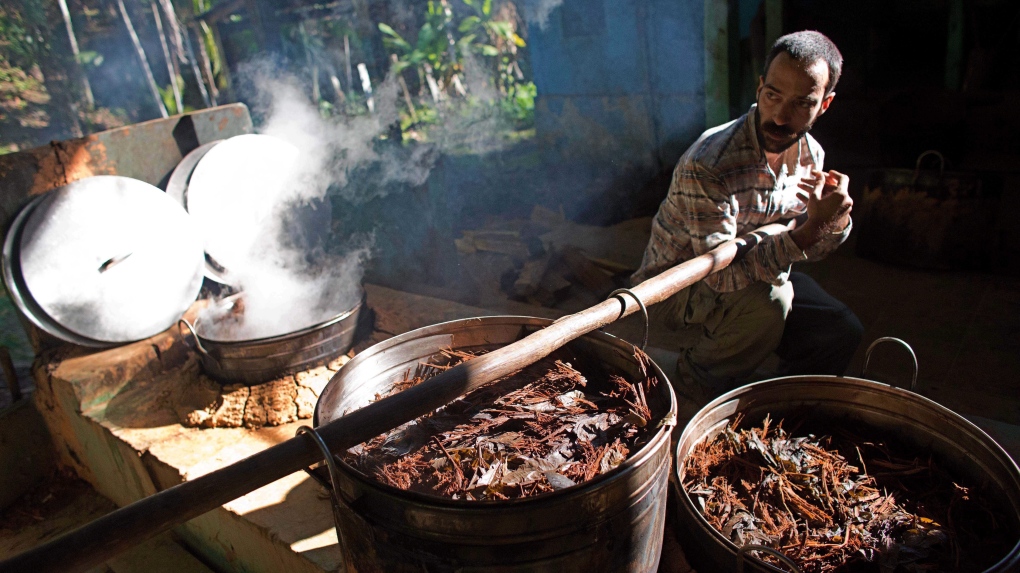 In this June 22, 2016 poto, a man moves a cauldron used for brewing a psychedelic tea locals know as the Holy Daime in Ceu do Mapia, Amazonas state, Brazil. (AP Photo/Eraldo Peres)

Montreal is to host Canada’s first conference on the religious and scientific aspects of controversial psychedelic ayahuasca.

The event “The Ayahausca Religions: The Sacrament, The Traditions and the Science,” is organized by the Eclectic Centre for the Universal Flowing Light, also known as Céu do Montréal.

Céu do Montréal is one of five religious groups in Ontario and Quebec granted a special exemption by Health Canada to import the hallucinogenic brew.

Ayahuasca is otherwise illegal in Canada, because it contains prohibited hallucinogens dimethyltryptamine (DMT) and harmaline.

“These sacred plants have guided an evolution into the religious ritual use that has now spread worldwide,” Céu do Montréal founder Rev. Jessica Rochester writes on the event webpage.

“Learn about the history of the Santo Daime, the search for consciousness throughout time, the importance of health and well-being through visitor screening, responsible practices and why this call to awakening is occurring at this time in our contemporary culture.”

Santo Daime is the name given to religious practices involving ayahuasca, believed to date back to the 1920s in Brazil.

Speakers at the event include Rev. Rochester, Paul Grof, a professor of psychiatry at the University of Toronto, Brian Rush, a scientist from the Centre for Addiction and Mental Health in Toronto and Ken Tupper, an adjunct professor from the University of British Columbia.

“This educational event is being held to advocate for and celebrate the emergence of sacred plants and their healing potential in our contemporary world,” the event website says.

“The well-being of the Earth, and all peoples, depends on our consciousness of this inter-connectedness. Modern science, and all spiritual paths with heart, support this wisdom.”

Ayahuasca has been used by indigenous people in South America for centuries as a sacrament in shamanic ceremonies.

The ceremony is usually accompanied by purging, including vomiting and diarrhea, which is believed to release built-up emotions and negative energy.

Some mental health professionals believe the drink could have benefits in treating depression or addiction under strict controls.

Ayahuasca ceremonies have become popular with tourists in Peru, where it is legal.

Over the past decade at least 11 tourists have died in incidents linked to traditional medicine in South America, according to news reports.

In a study published in August 2018 in the journal Frontiers, 13 volunteers took DMT, the naturally occurring psychedelic and primary ingredient in ayahuasca.

Most volunteers confirmed seeing or being surrounded by a brilliant light, mirroring reports of so-called near-death experiences in which people claim they felt a sense of inner peace and an out-of-body sensation of passing into another realm.

The conference takes place in Quebec’s biggest city on October 19.