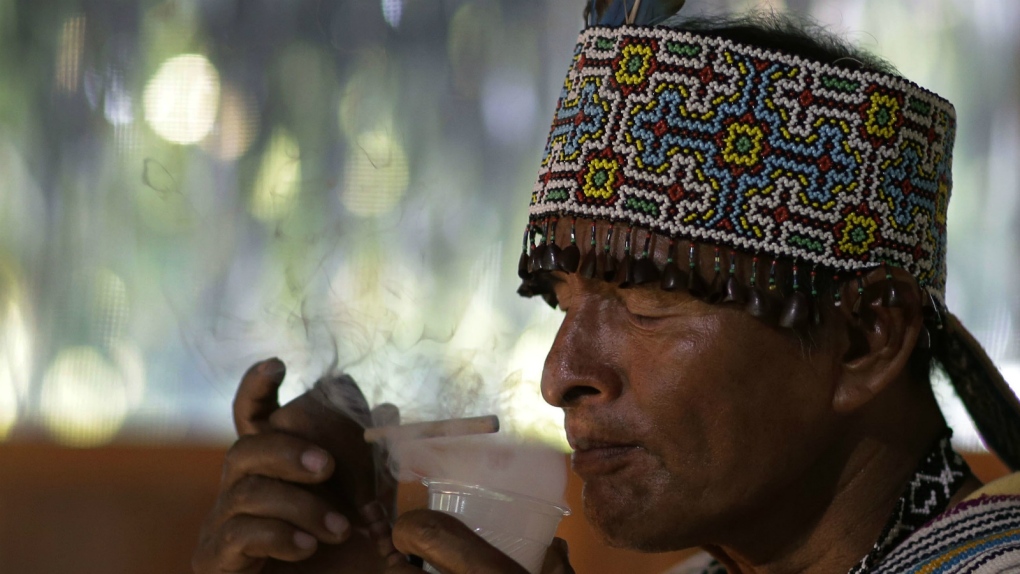 Shaman Pablo Flores prepares to drink ayahuasca during a session in Nuevo Egipto, a remote village in the Peruvian Amazon on May 5, 2018. (AP Photo/Martin Mejia)

NUEVO EGIPTO, Peru -- Sitting on a mattress strewn across the floor with white sheets, Pamela Moronci closes her eyes while a traditional healer starts to chant in the indigenous Shipibo language.

In a straw hut, engulfed by the nighttime cacophony of the Amazon rainforest, a shaman inhales a potent tobacco from a pipe and blows smoke on Moronci's head to cleanse her, before she takes her place in a sacred ayahuasca ceremony. He offers the Italian woman a plastic cup with three ounces of a bitter, muddy brew made of psychedelic vines. Moronci drinks it, coughs and smiles despite its unpleasant taste.

"There is a really strong energy here," she says, before falling asleep, amid the chirping of crickets and thundering rain.

Every year thousands of tourists visit jungle retreats in Peru, Colombia and Ecuador to try ayahuasca, a hallucinogenic elixir made of native plants that is thought to heal some mental illnesses. But while Moronci and others say they have found peace and enlightenment, for a few seekers the experience has been fatal.

And as more Westerners seek out the legendary curative, commercialization has taken over as profit-seeking impostors pop up among the dozens of legitimate ayahuasca centres that have emerged over the years.

Over the past decade at least 11 tourists have been killed in incidents linked to traditional medicine in South America, according to news reports, including a California man who was buried secretly by a shaman after he died in an ayahuasca ceremony in Peru. The latest killing took place in April, not far from the Peruvian village of Nuevo Egipto, where Sebastian Woodroffe, a 41-year-old Canadian man studying medicinal plants, was bludgeoned in broad daylight by an angry mob in retaliation for him allegedly killing a revered traditional healer.

Peruvian investigators later concluded Woodroffe shot healer Olivia Arevalo with a gun he purchased. Now they are investigating what could have led him to pull the trigger.

"The most likely scenario is that it was a dispute over money," says Ricardo Jimenez, the lead prosecutor in the case.

In 2015, a former Goldman Sachs analyst got hold of a knife during an ayahuasca ceremony at a retreat centre in Peru and attacked a Canadian man who was with him. He was killed by the Canadian, who acted in self-defence. In 2014, a 19-year-old British man died in Colombia after he passed out during an ayahuasca ritual.

Anthropologists say the region's history of violence and lawlessness could be replicating itself in the virtually unregulated ayahuasca industry. In backwater towns like Iquitos or Pucallpa, aggressive English-speaking touts offering ayahuasca ceremonies greet tourists literally as they come off the boat, while in indigenous markets a litre-size bottle of the powerful tea fetches as much as $100.

"The Amazon has long had a frontier economy, based on the exploitation of its natural resources," said Ana Echazu-Boschemeier, an anthropology professor at the Federal University of Rio Grande do Norte in Brazil, who spent more than a year in the jungle researching ayahuasca and its uses.

"To some extent, shamanic tourism is replicating this savage logic of extractive industries where people and nature have little protection," she said.

Ayahuasca in the Quechua language means the vine of the soul -- or death, depending on the translation -- and it has been used for hundreds of years by indigenous communities throughout the Amazon basin, mostly in religious rituals.

The gringo trail to the spiritual El Dorado took off with the publication in 1963 of "The Yage Letters," in which beatnik poet Allen Ginsberg described feeling like a "snake vomiting out the universe" after trying ayahuasca in the rainforest a short boat ride from Nuevo Egipto.

More recently, it has won devotees among the rich and famous despite its reputation for an all-consuming high that for many people leads to violent vomiting and diarrhea. Troubled actress Lindsay Lohan credits ayahuasca with changing her life, singer Sting said it was his only ever "genuine religious experience," and Netflix is currently distributing two documentaries on the mind-tripping drink with big-name backers like Leonardo DiCaprio and Chelsea Handler.

Charles Grob, a psychiatrist at the Harbor-UCLA Medical Center in Los Angeles who has studied ayahuasca, says that the plants' effects are mostly benign. In 1993, he conducted a study on ayahuasca users in Brazil, finding that subjects who attended a church that reveres ayahuasca were mentally healthy.

"A number of our subjects had strong histories of alcohol abuse that entirely ceased," after they joined the Uniao do Vegetal church and took ayahuasca twice a month, Grob said.

But Grob adds that there are risks in taking the plant, especially in places where there is no medical facilities or proper oversight. The plant contains DMT, an alkaloid that causes strong hallucinations.

"Some retreat centres are well trained and have a good sense of ethics, but in others that may not be the case," said Grob.

Although the ayahuasca ritual was declared part of Peru's national heritage in 2008, there are no established guidelines for how a ceremony should be conducted or any agency in charge of overseeing people who carry out the rituals.

Moronci, the Italian tourist, says the spate of ayahuasca deaths, and the killing of Woodroffe, did not cause her much concern.

The 30-year-old businesswoman said she first tried ayahuasca in Italy as she fought depression, and credits it with "finding truths" about herself that traditional meditation could not provide. There she met a shaman from Spain who told her about retreat centres in Peru.

In a recent ritual in Nuevo Egipto led by local shaman Pablo Flores, Moronci said she relived happy moments of her childhood, and also realized she had health problems that had to be addressed.

"The plant told me I had a problem in my ovaries that I was not aware of, and that is what I am working on now," she said.

Grob says most foreigners coming to Peru for ayahuasca are "seekers" looking for personal healing, not a psychedelic high.

But with time, the influx of these spiritual tourists is changing how the plant is used and perceived, says anthropologist Echazu-Boschemeier. While indigenous tribes have longed used the brew to ward off evil spells and even to hurt their enemies, its current popularity in the West as a form of mental and physical healing has overtaken all other traditional uses.

"Tourism is sanitizing ayahuasca," she said. "But it has always had many uses."