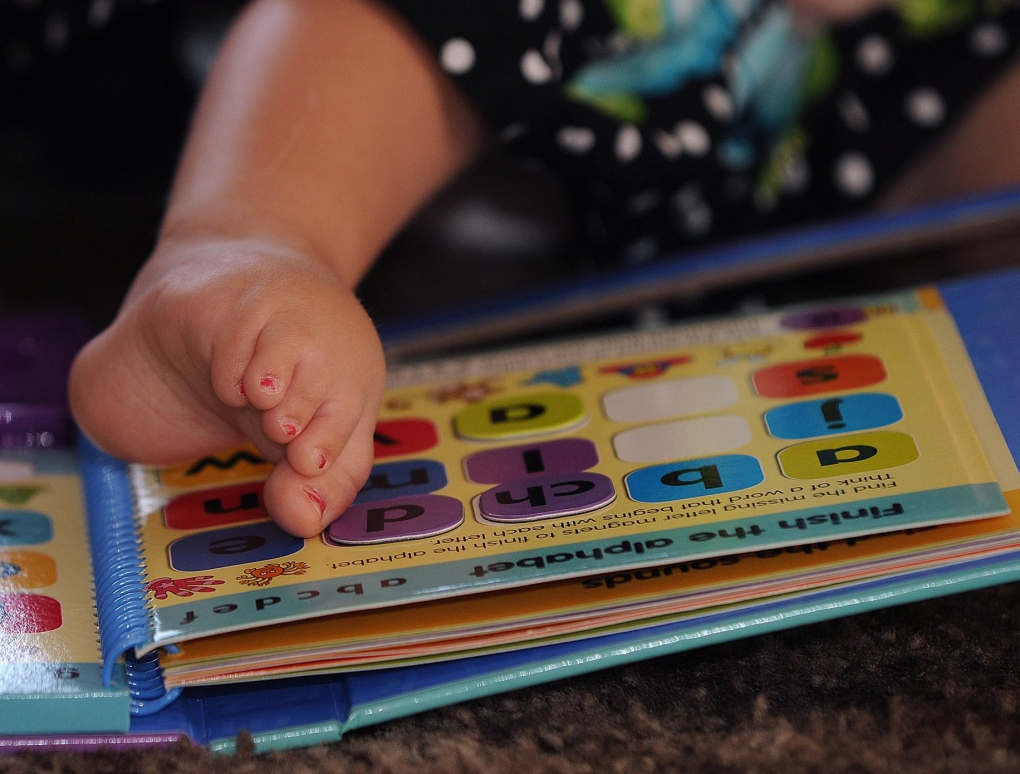 WASHINGTON -- Using videos that claim to teach toddlers, or flash cards for tots, may not be the best idea. Simply talking to babies is key to building crucial language and vocabulary skills - but sooner is better, and long sentences are good.

So says research that aims to explain, and help solve, the troubling "word gap": Children from more affluent, professional families hear millions more words before they start school than poor kids, leaving the lower-income students at an academic disadvantage that's difficult to overcome.

That gap starts to appear at a younger age than scientists once thought, around 18 months, said Stanford University psychology professor Anne Fernald.

And research being presented this week at a meeting of the American Association for the Advancement of Science suggests that it's not just hearing lists of words that matters as much as rich, varied language with good grammar that trains babies' brains to learn through context.

Instead of just saying, "Here's an orange," it would be better to say: "Let's put the orange in this bowl with the banana and the apple and the grapes."

"It's making nets of meaning that then will help the child learn new words," Fernald explained.

"The advice I give mothers is to have conversations with your babies," added Erika Hoff, a psychology professor at Florida Atlantic University. "Children can hear lots of talk that goes over their head in terms of the meaning, and they still benefit from it."

The research comes amid a growing push for universal preschool, to help disadvantaged youngsters catch up. But it also raises the question of whether children from low-income, less educated families need earlier intervention, such as preschool that starts at age 3 instead of 4, or higher quality day care or even some sort of "Let's talk" campaign aimed at new parents to stress talking, singing and reading with tots even before they can respond. That can be difficult for parents working multiple jobs, or who may not read well or who simply don't know why it's important.

Scientists have long known that before they start kindergarten, children from middle-class or affluent families have heard millions more words than youngsters from low-income families, leaving the poorer children with smaller vocabularies and less ready to succeed academically. Fernald said by some measures, 5-year-olds from low-income families can lag two years behind their peers in tests of language development.

How early does the word gap appear? Around age 18 months, Stanford's Fernald discovered when she compared how children mentally process the language they hear. Lower-income kids in her study achieved at age 2 the level of proficiency that more affluent kids had reached six months earlier.

To understand why language processing is so important, consider this sentence: "The kitty's on the bench." If the youngster knows the word "kitty," and his brain recognizes it quickly enough, then he can figure out what "bench" means by the context. But if he's slow to recognize "kitty," then "bench" flies by before he has a chance to learn it.

Next, Fernald tucked recorders into T-shirts of low-income toddlers in Spanish-speaking households to determine what they heard all day - and found remarkable differences in what's called child-directed speech. That's when children are spoken to directly, in contrast to television or conversations they overhear.

But it's not just quantity of speech that matters - it's quality, Hoff cautioned. She studied bilingual families and found that whatever the language, children fare better when they learn it from a native speaker. In other words, if Mom and Dad speak Spanish but aren't fluent in English, it's better for the child to have a solid grounding in Spanish at home and then learn English later in school.

Next, scientists are testing whether programs that teach parents better ways to talk to tots really do any good. Fernald said preliminary results from one of the first - a program called Habla Conmigo, Spanish for Talk With Me, that enrolls low-income, Spanish-speaking mothers in San Jose, Calif. - are promising.

Fernald analyzed the first 32 families of the 120 the program will enroll. Mothers who underwent the eight-week training are talking more with their toddlers, using higher-quality language, than a control group of parents - and by their second birthday, the children have bigger vocabularies and process language faster, she said Thursday.

Tips for talking to babies, toddlers

Research shows that both how much and how well parents talk to babies and toddlers influence development of language and vocabulary skills crucial to later school achievement. Here are some tips: