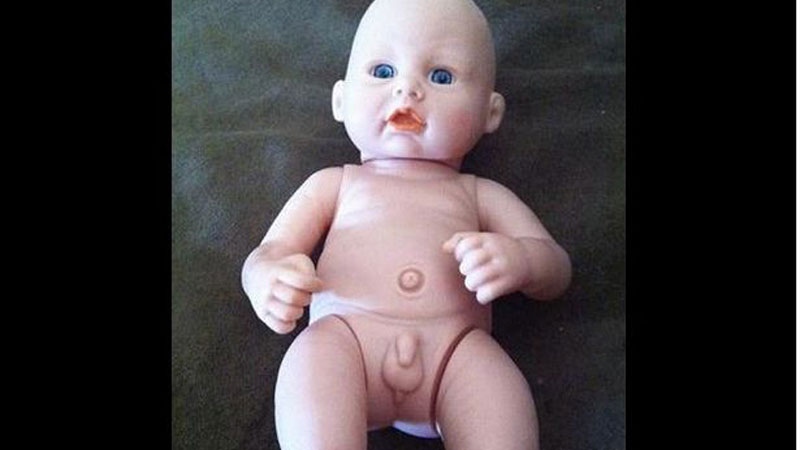 If a baby doll is supposed to be a boy, it should probably look like a boy, right? Well, one mother doesn’t think so. She says she was shocked to find a doll she bought for her daughter actually showed a penis.

The mother from Shiloh, N.J., posted a picture on Facebook this week of a doll that appears to be the "You & Me Change My Diaper Doll." When she expressed shock at what her daughter found under the diaper, she managed to set off a small firestorm.

“I took my daughter to buy a new baby at toys r us. And she was so excited to find a baby boy doll because it was dressed in blue. But when she went to change his diaper, this was the surprise (sic)," the woman wrote. "Why?? These r little girls that don’t need to know the anatomy (sic),” she wrote in the photo caption.

(A Florida-based radio station, News 96.5.com, shared an image of the Facebook posting, but the post itself has since been taken down.)

The post received several shares and comments, including one from a fellow mother who wondered why the packaging didn't explain that the doll was anatomically correct.

"It's kinda late to take it back now that she's already been exposed to seeing that. I mean the damage is done and it left you having to explain things sooner than you wanted to," the mother wrote.

But plenty of others are wondering what all the fuss is about. A doll that promises to drink from a bottle and wet its diaper should have the equipment to do so, many noted. Writer Monica Beyer of SheKnows.com, had a bigger question, wondering why it's suddenly wrong for a child to see a naked baby.

"What about a baby makes a penis or a vulva dirty or sexual? Because that's what it sounds like when people say that it's wrong for little girls to see it," she wrote.

Beyer added that telling parents they should teach kids to hide their bodies is "an element of a larger issue – that we are ashamed of our bodies and that even babies are shameful."

Erin Lane, a writer at the BabyCenter blog says she talks to her children about all their body parts.

"What I tell them at three will be different than six and much different than twelve – but we’ll talk about it nonetheless. And a doll might even be helpful," she wrote.

While the doll has been available for sale on Amazon for more than three years, there are only a few negative reviews from Amazon. None mention the penis. Instead, the reviewers are irritated the doll "leaks" too much, or are insulted about what it babbles. Seems it only call for "Mama," not "Dada" too.