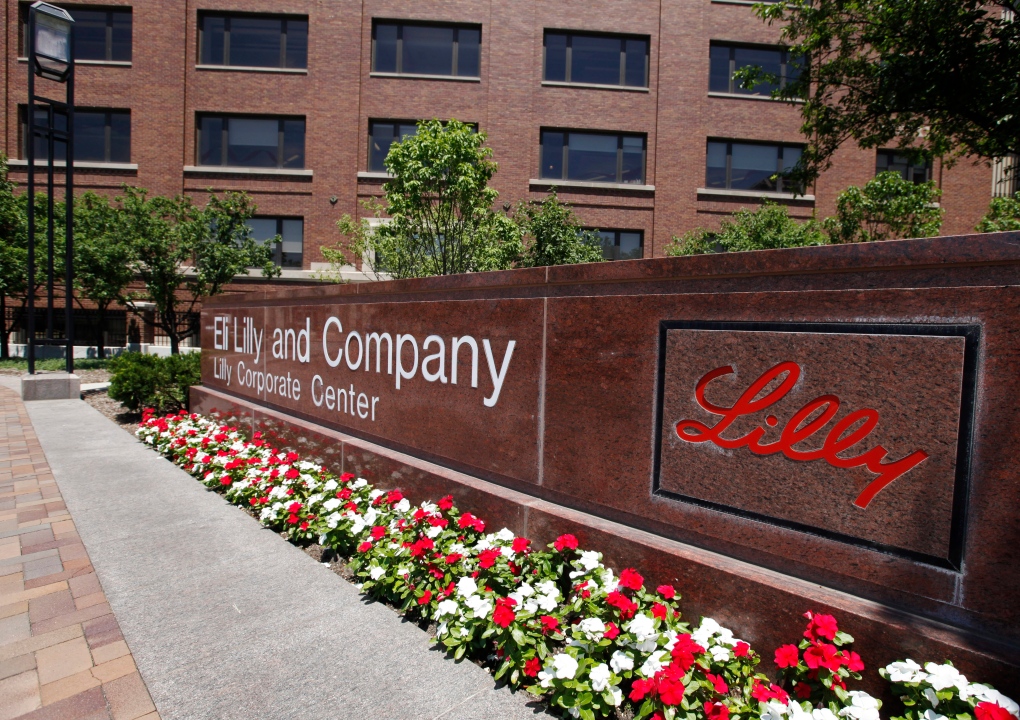 In this June 30, 2011 file photo, a sign in from of the Eli Lilly and Co corporate headquarters is displayed in Indianapolis. (AP / Darron Cummings)

INDIANAPOLIS -- A possible Alzheimer's disease treatment from drugmaker Eli Lilly showed some promise in late-stage research, even though the drug failed to slow a form of mental decline in two separate studies of patients with the mind-robbing condition.

Shares of the Lilly climbed Friday in morning trading after the Indianapolis company announced what could be a step toward a long-awaited breakthrough in the fight against a disease that has no cure and ultimately proves fatal.

But Lilly officials cautioned that it's important not to overreact to their initial results.

Lilly said Friday its treatment, solanezumab, failed to slow cognitive decline, which involves a person's memory, in two late-stage studies of about 1,000 patients each. But when data from the trials were combined, scientists saw a statistically significant slowing of the rate of cognitive decline in the bigger population.

The studies fell short of their main goals, and that means the drug "isn't going to the (Food and Drug Administration) tomorrow to be approved for sale," said William H Thies, chief medical and scientific officer for the Alzheimer's Association, which was not involved in Lilly's research. Still, he said the statistical significance of the combined results is important.

Lilly said it will discuss the results with regulators and plan the next steps. Full results from the studies will be presented at two scientific conferences in October.

If you look through "rose-colored glasses" at the results, there may be a sign of potential benefit on cognitive tests, but it is not clear whether that is enough to make a real difference clinically in how patients do, said Dr. Ronald Petersen, director of the Mayo Clinic's Alzheimer's Disease Research Center.

The key will be details the company will present later on brain imaging and other tests, he said. If those show that the drug is helping clear plaque, "it might mean that the drug is doing what it's supposed to be doing, but we're just attacking the disease too late," said Petersen, who heads a safety monitoring panel for two companies working on a different Alzheimer's treatment.

It's up to the FDA to decide how much faith to put in secondary analyses or results in subgroups, he added.

"The danger would be an over-interpretation of a small finding or a subtle effect," Petersen said.

About 35 million people worldwide have dementia, a term for brain disorders that affect memory, judgment and other mental functions. Alzheimer's is the most common type. In the United States, more than 5 million people have Alzheimer's, which is the country's sixth-leading cause of death.

Many Alzheimer's patients typically live four to eight years after diagnosis, as the disease gradually erodes their memory and ability to think or perform simple tasks. Current Alzheimer's treatments only temporarily ease symptoms such as memory loss, confusion and agitation. They don't slow, stop or reverse mental decline.

Drugmakers have tried and failed for years to develop successful treatments for the disease, and patients and doctors are anxious for any signs of promise. Analysts have said an approved treatment that slows the disease's progression could be worth billions of dollars in sales.

Earlier this month, Pfizer Inc. and Johnson & Johnson said they would end development of an intravenous version of their potential Alzheimer's treatment, bapineuzumab, after two late-stage studies showed it worked no better than a placebo in patients with mild-to-moderate cases.

Lilly officials cautioned Friday that their study did not show that solanezumab slowed the progression of Alzheimer's. It showed signs of slowing cognitive decline, one of many ways the disease impacts a person's mind. Even so, they were encouraged.

Solanezumab binds to beta-amyloid protein, which scientists believe is a key component to sticky plaque that basically gums up the brain of a patient with Alzheimer's disease. The drug is designed to bind to the protein and help the body remove it from the brain before it can form that plaque. Lilly said that while the individual trials missed their main goals, the combined results showed there may be some validity to this approach.

"I believe in the notion that an amyloid-lowering agent like solanezumab will eventually work in early disease or pre-symptomatically, but whether these data provide compelling evidence that solanezumab has 'cleared the bar' just cannot be concluded" until full results are presented, Gandy wrote in an email.

Baxter International Inc. also reported some encouraging results in July from its potential Alzheimer's treatment, Gammagard. The company said a tiny study indicated Gammagard might help stabilize Alzheimer's for up to three years. Four patients who got the highest dose of Gammagard for three years showed no decline on memory and cognition tests, but a dozen others on different doses or shorter treatment times didn't fare as well.

That study was too small to prove the treatment works, but a more rigorous one involving 400 patients will end late this year, with results expected by early next year.