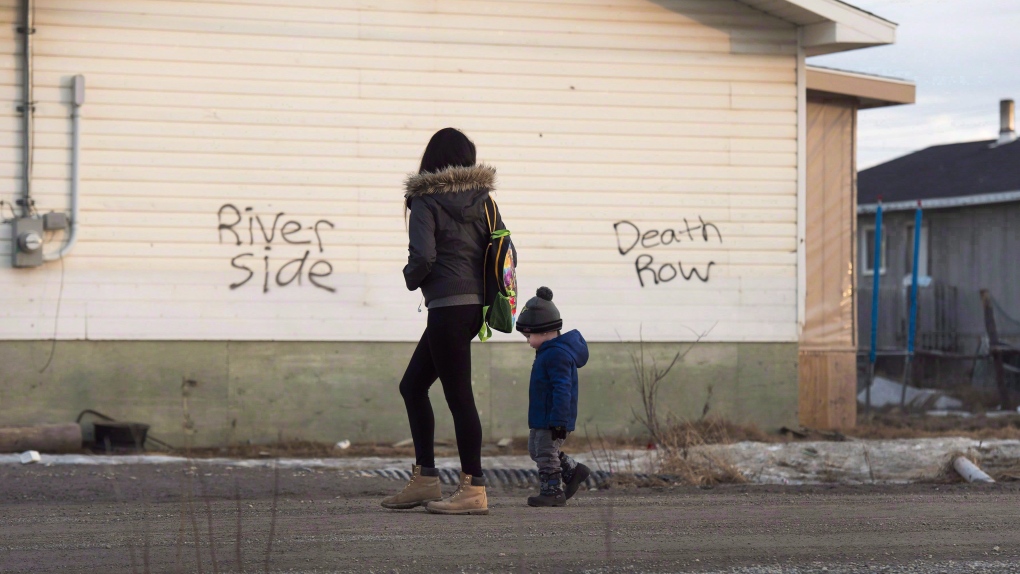 A woman and a child walk through the streets in Attawapiskat, Ont., on Monday, April 16, 2016. THE CANADIAN PRESS/Nathan Denette

Chief Chris Moonias looked into a web camera as he prepared to get a COVID-19 vaccine just after precious doses arrived in his northern Ontario community.

"I'm coming to you live from Neskantaga First Nation community centre where our vaccines will be administered," a jovial Moonias, wearing a blue disposable mask, said during a Facebook live video at the start of February.

Moonias was first to get the vaccine in the fly-in Oji-Cree First Nation on the shores of Attawapiskat Lake north of Thunder Bay.

The vaccine had arrived by plane earlier in the day after weeks of planning, and the chief's video was part of a campaign to get community members on board.

Moonias said in an interview that he had done his own research, had spoken with medical professionals and wasn't concerned about getting the shot.

About 88 per cent of eligible on-reserve members have since received a first dose of the Moderna vaccine. Second doses are to arrive Monday.

However, earlier this week, the reserve declared a state of emergency due to a COVID-19 outbreak, with some cases linked to the Thunder Bay District Jail.

Moonias said four off-reserve members in Thunder Bay, all under the age of 40 -- including his nephew -- have died. And he's worried about the 200 other members who live off the reserve -- almost the same number as those on the reserve -- and when they'll get inoculated.

"I even thought about flying my people up.. to get the vaccine," said Moonias, who added it's unlikely to be an option because of cost.

Canada is in the midst of the largest vaccine rollout in its history. The second wave of the COVID-19 pandemic has hit Indigenous populations much harder and Ottawa says they are a priority for vaccinations.

The actual distribution remains complex and varied across the country.

Neskantaga is one of 31 fly-in First Nations included in Operation Remote Immunity, part of the first phase of Ontario's vaccination rollout. The operation was developed with Nishnawbe Aski Nation and Ornge, the province's air ambulance service. The goal is to provide mass vaccinations by April 30 and it is having early successes.

There are challenges getting the vaccine to remote First Nations and questions about distribution for urban Indigenous populations.

The Assembly of First Nations says most Indigenous communities haven't received sufficient supply to extend doses to their off-reserve members. The National Association of Friendship Centres says there is no national vaccination plan for urban Indigenous people.

There's also concern there is no national plan to tackle decades of mistrust created by systemic racism and experimentation on Indigenous people.

There are many examples throughout Canadian history of scientists sponsored by the federal government or the government itself doing medical experiments on Indigenous people, including children, who were the subject of a tuberculosis vaccine trial in Saskatchewan that began in the 1930s.

Ontario New Democrat Sol Mamakwa, who represents the electoral district of Kiiwetinoong, said some constituents tell him they are scared to take the vaccine. They don't trust it.

He has been travelling to communities to help promote it and received his first dose alongside members of Muskrat Dam Lake First Nation.

It's about giving people information, he said.

"One of the only ways out of this pandemic is the vaccine," said Wade Durham, Ornge's chief operating officer, who added it's key to have Indigenous people involved in vaccine planning.

Each First Nation in Operation Remote Immunity has a community member responsible for answering questions and setting up a vaccination site. Immunization teams are required to take cultural training and, when possible, include Indigenous medical professionals and language speakers.

Indigenous Services Canada said it is aware that a history of colonization and systemic racism has caused mistrust, so campaigns are being developed specifically for First Nations, Inuit and Metis communities.

Michelle Driedger, a Metis professor of community health sciences at the University of Manitoba, said experience has shown that stakes are high when it comes to Indigenous communities.

During the H1N1 pandemic in 2009, the Public Health Agency of Canada prioritized vaccines by geography. A main lesson learned was to increase Indigenous representation at decision-making tables, she said.

At the time, Indigenous people were over-represented in hospitalizations and intensive care stays, as well as in deaths. Those living in remote and isolated communities experienced worse outcomes.

Driedger said the vaccine response is better now, but there is "rational skepticism." There needs to be a transparent vaccination plan for Indigenous communities -- no matter where they are, she said.

The Matawa First Nations tribal council said its four communities reachable by road are not getting the same vaccine access as its five fly-in ones, and more needs to be done.

Provincial officials have said that remote First Nations received priority for the vaccine rollout because of less access to on-site health care and increased health risks. Chief Rick Allen from Constance Lake First Nation has said the vaccine needs to go where the outbreaks are.

Back in Neskantaga, Moonias said he'll do anything he can to protect anyone he can.

He continues to give updates about his vaccination. In another Facebook video posted soon after he received his shot, the chief gave a thumbs-up and said he had no pain or discomfort.

"We need this. We need to beat this virus."

This story was produced through the Journalists for Human Rights Indigenous Reporters Program under the mentorship of The Canadian Press, with funding from the RBC Foundation in support of RBC Future Launch.

From science to syringe: COVID-19 vaccines are miracles of science and supply chains

Canada's vaccine arsenal could get another addition within weeks: senior health official

New Zealand's largest city back in lockdown as COVID-19 lingers