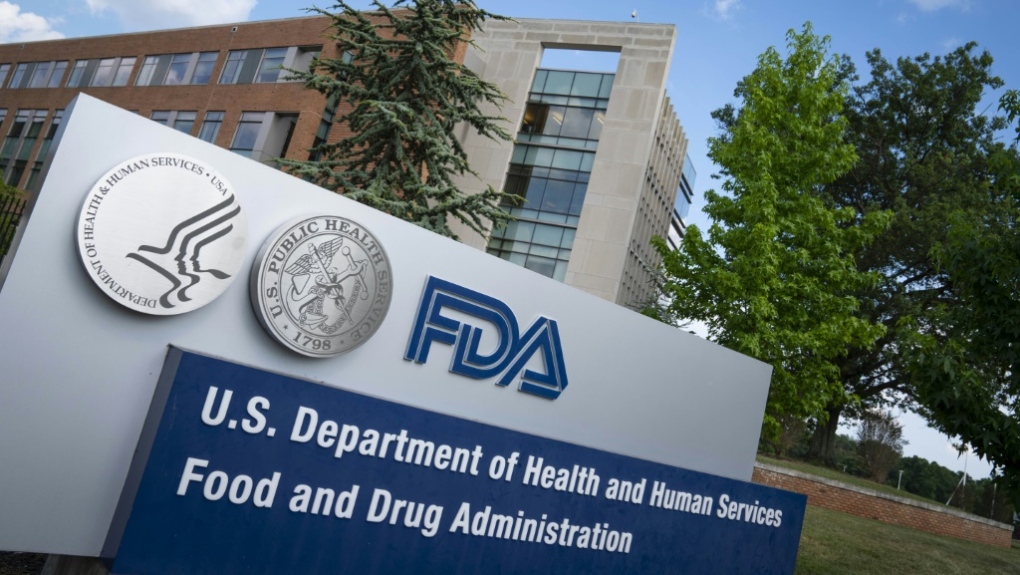 A sign for the Food And Drug Administration is seen outside of the headquarters in White Oak, Maryland. (AFP)

WASHINGTON -- A COVID-19 antibody therapy used to treat U.S. President Donald Trump was approved by the U.S. drug regulator on Saturday for people who aren't yet hospitalized by the disease but are at high risk.

The green light for drugmaker Regeneron came after REGEN-COV2, a combination of two lab-made antibodies, was shown to reduce COVID-19-related hospitalizations or emergency room visits in patients with underlying conditions.

"Authorizing these monoclonal antibody therapies may help outpatients avoid hospitalization and alleviate the burden on our health care system," said Stephen Hahn, commissioner of the Food and Drug Administration (FDA).

Leonard Schleifer, Regeneron's president and CEO, added the move was "an important step in the fight against COVID-19, as high-risk patients in the United States will have access to a promising therapy early in the course of their infection."

The human immune system naturally develops infection-fighting proteins called antibodies -- but because not everyone mounts an adequate response, companies like Regeneron and Lilly have manufactured lab-made solutions.

They work by binding to a surface protein of the SARS-CoV-2 virus and stopping it from invading human cells.

The FDA said the data supporting Regeneron's EUA came from a clinical trial in 799 non-hospitalized patients with mild to moderate symptoms of COVID-19.

For patients who were at high risk because of a variety of underlying conditions -- from obesity to old age to diabetes -- hospitalization and emergency room visits occurred in three per cent of patients who received the intravenous treatment.

This compared to nine per cent in placebo-treated patients.

Patients treated with the drug also had lower levels of virus remaining compared to those on the placebo.

These will be available to U.S. patients at no out-of-pocket cost under the terms of a U.S. government program.

But with cases surging across the U.S. and globally, that means access will not be widespread. The U.S. has added more than 360,000 new COVID-19 cases in the past two days alone.

The recommended dose is 1,200 milligrams of each of the two antibodies, for a total of 2,400 milligrams, in a single infusion.

Regeneron has received more than US$450 million from the U.S. government for its COVID-19 drug development efforts under Operation Warp Speed.

Last month, an antibody drug developed by Regeneron against the Ebola virus received full FDA approval, the next step after an EUA.

In the case of COVID-19, Regeneron first found two antibodies that were highly effective against the SARS-CoV-2 virus, one from a mouse whose immune system was modified to be human-like, the other from a human.

They then harvested the immune cells that made those antibodies and grew them in a lab, in order to create a mass treatment.

COVID-19 vaccines, like those developed by Pfizer and Moderna, work by training the immune system to make its own antibodies so they are prepared when they encounter the virus.

Quebec reports that 1,154 more people have tested positive for COVID-19 in past 24 hours