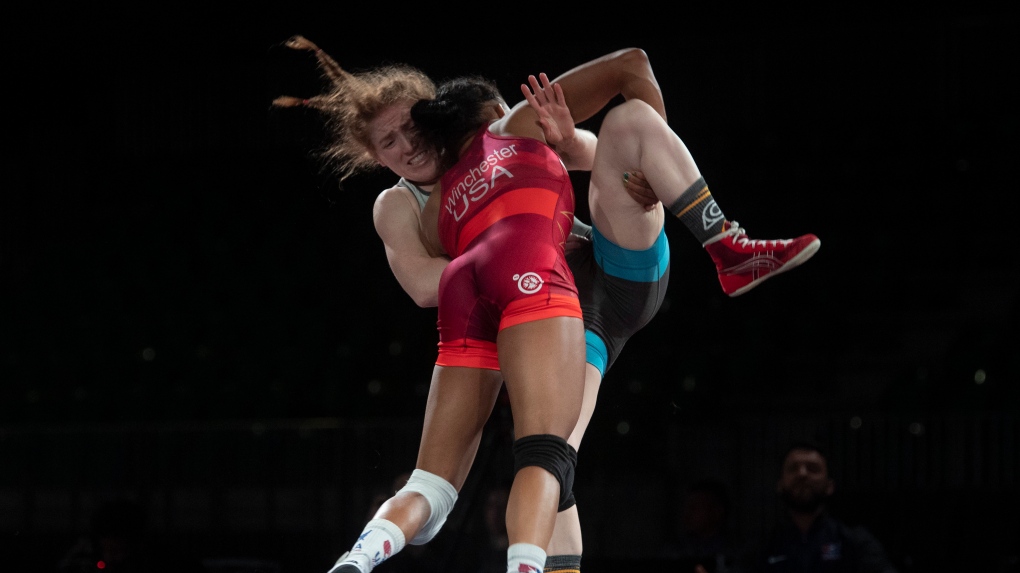 NEWS -- Sam Pedlow has time on his hands to wonder if he'll compete in beach volleyball at the Tokyo Olympics this summer.

The 32-year-old is self-quarantined in his Toronto home with his wife and two cats after landing Friday from a tournament in Doha, Qatar.

Like the majority of sports in the world, beach volleyball pressed pause on its season to help contain the spread of COVID-19.

With the Olympics still over four months away, the Tokyo organizing committee and the International Olympic Committee insist the Games will open July 24.

While that's heartening to Canadian athletes who have already qualified to be part of Team Canada in Tokyo, dozens have been thrown into qualification limbo.

Pedlow and teammate Sam Schachter from Richmond Hill, Ont., currently hold down the required top-18 spot in the FIVB's provisional Olympic ranking to get to Tokyo.

But the criteria and rules for Olympic qualification across all sports could change dramatically the longer the world remains in a holding pattern.

With the beach tour shut down until the end of April and perhaps beyond, will the sport's governing body arbitrarily change criteria to get to Tokyo?

"It's a little bit more challenging to say with confidence we will be there one hundred per cent because I'm not sure what the qualification period even looks like any more," Pedlow said Monday in a phone interview with The Canadian Press. "If there's no tournaments and they change the classification system, we could be in, we could be out. It's difficult to say.

"If they keep the classification and there's no tournaments, we're in one hundred per cent."

Beach volleyball has a relatively long qualifying period of gathering points over the 18 months prior to the Summer Games.

The world and national governing bodies at least have some results to indicate performance.

But other Canadians book their Olympic berths in a one-off, performance-on-demand setting.

The Olympic and Paralympic swim trials scheduled for March 30 to April 5 in Toronto, for example, are on hold. Swimmers have to finish top two in their finals and meet a time standard to make the Olympic team.

Swimming Canada intends to make a decision about trials by April 21. Implementing an alternate qualification path is one of the organization's backup options.

"I think everyone is wondering what's going to happen," said backstroke specialist Markus Thormeyer from Delta, B.C. "It's just a waiting game at this point."

The national track and field trials June 25-28 in Montreal have not yet been scuttled, but about a dozen Canadian federations have had their Tokyo qualification processes interrupted.

Some Canadians punched their Tokyo tickets just in time.

Wrestler Erica Wiebe, who won gold in Rio four years ago, was among four Canadians who qualified at a tournament in Ottawa this past weekend.

But two-time Pan Am Games champion Mandy Bujold of Kitchener, Ont., was supposed to be among 13 boxers travelling to a March 26 qualifying tournament in Buenos Aires.

The competition was cancelled, so the 32-year-old doesn't know how to structure her training now.

"We don't really have an: 'OK, it's not happening on the 26th, but maybe it's going to be happening in three weeks,' so you can kind of plan," Bujold said.

"That really changes what you need to do for your periodization, and how you need to change your training right now."

The cancellation or postponement of the world's biggest marathons in Boston, London and Rotterdam, the Netherlands, have left Canadian runners in limbo.

"If the Tokyo Olympics do indeed take place this summer, I urge the International Olympic Committee, World Athletics and Athletics Canada to take this global crisis into consideration when naming all competing athletes," the 30-year-old from Black Creek, B.C., said.

World Athletics changed its Olympic qualifying criteria. No longer meeting a standard and finishing top-three at the national championships is enough to earn a berth. There's a convoluted criteria that includes accumulating points at top international meets.

"The athletes have Olympic dreams, and this is really kind of messed things up," said coach Vickie Croley, a coach for decathletes Damian Warner and Taylor Ehrhardt, among others. "From the perspective of Taylor, he and I were going to go to a (decathlon competition) in Italy the end of April. So obviously, that's been cancelled. And that particular meet would give him an extra 100 points (toward qualifying)."

Race walker Evan Dunfee of Richmond, B.C., achieved his Olympic standard last season, but knows of others in his sport who haven't yet. Winner of a world championship bronze in 50k, Dunfee questions how fair qualifying could be in light of travel bans and event cancellations.

"If there are a handful of countries that have closed or not allowing their citizens to travel, is it fair to even host the events?" Dunfee asked. "There are so many different aspects to look at, but at the end of the day, it's important to remember that athletes aren't speaking out against these measures.

"Athletes realize that this is what needs to be done in this unprecedented situation to try to contain this. But it does kind of suck in and it's worth talking about, I think, from the athletes' point of view."

Canada's men's water polo team was set to battle for a spot in Tokyo at their qualifying event March 22-29 in Rotterdam. FINA has postponed the event until early-June in a location yet to be determined.

"FINA has said that by April 30, they will reaffirm this or confirm the location," said Martin Goulet, Water Polo Canada's CEO. "The only relief is that our opponents are all in the same boat, so it's not any better for the other guys around the world."

A men's qualifier scheduled to start Monday in the United States was called off.

Dozens of Canadian Paralympians face the same quandary as their Olympic counterparts in wondering how they'll qualify for Tokyo.

"We're going to have to probably provide flexibility to the national federations in terms of their way of selecting if they can't hold a competition."

This report by The Canadian Press was first published March 16, 2020.