Sweden suspends Moderna vaccine for those 30 and under

Sweden suspends Moderna vaccine for those 30 and under 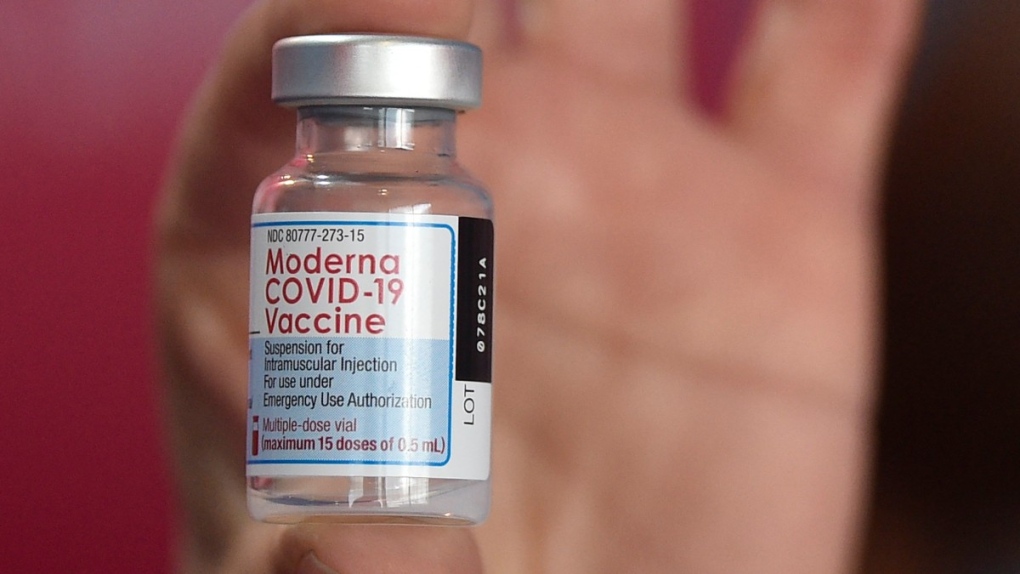 A health worker shows a vial of the Moderna vaccine for COVID-19 at a health centre in Quilmes, Argentina, on Aug. 3, 2021. (Gustavo Garello / AP)
COPENHAGEN, Denmark -

Scandinavian authorities on Wednesday suspended or discouraged the use of Moderna's COVID-19 vaccine in young people because of an increased risk of heart inflammation, a very rare side effect associated with the shot.

Sweden suspended the use of Moderna for those recipients under 30, Denmark said those under 18 won't be offered the Swiss-made vaccine, and Norway urged those under 30 to get the Pfizer vaccine instead.

The countries have adequate supplies of both Pfizer and Moderna vaccines and will be able to continue their vaccination campaigns.

In neighboring Finland, authorities are expected to announce their decision Thursday, according to Dr. Hanna Nohynek, chief physician at the Finnish Institute for Health and Welfare, told local broadcaster YLE.

All three countries based their decision on an unpublished study with Sweden's Public Health Agency saying that it signals "an increased risk of side effects such as inflammation of the heart muscle or the pericardium" -- the double-walled sac containing the heart and the roots of the main vessels. It added: "The risk of being affected is very small."

Anders Tegnell, Sweden's chief epidemiologist, said they "follow the situation closely and act quickly to ensure that vaccinations against COVID-19 are always as safe as possible and at the same time provide effective protection" against the disease.

The preliminary information from the Nordic study has been sent to the European Medicines Agency's adverse reaction committee to be assessed.

The study was conducted by Denmark's Statens Serum Institut, a government agency that maps the spread of the coronavirus in the country; the Medical Products Agency in Sweden; Norway's National Institute of Public Health; and the Institute for Health and Welfare in Finland. The final results were expected in about a month, said Bolette Soeborg of the Danish government health agency.

Moderna's vaccine was given the green light for use in anyone 18 and over across the 27-nation European Union in January.

In July, the European Medicines Agency recommended authorizing Moderna's COVID-19 vaccine for children ages 12 to 17, the first time that shot was cleared for anyone under 18. Canada also recently approved its use for those as young as 12.

The Pfizer/BioNTech vaccine is cleared for people 12 and older in Europe and North America.

Hundreds of millions of Moderna doses already have been administered to adults. In a study of more than 3,700 children aged 12 to 17, the vaccine triggered the same signs of immune protection, and no COVID-19 diagnoses arose in the vaccinated group compared with four cases among those given dummy shots.

Sore arms, headache and fatigue were the most common side effects in young vaccine recipients, the same ones as for adults.

U.S. and European regulators cautioned, however, that both the Moderna and Pfizer vaccines appear linked to a rare reaction in teenagers and young adults -- chest pain and heart inflammation.

Swedish health authorities said the heart symptoms "usually go away on their own," but they must be assessed by a doctor. The conditions are most common among young men, in connection with, for example, viral infections such as COVID-19. In 2019, approximately 300 people under the age of 30 were treated in hospital with myocarditis.

Data point to an increased incidence also in connection with vaccination against COVID-19, mainly in adolescents and young adults and mainly in boys and men.

The preliminary Nordic analysis indicate that the connection is especially clear when it comes to Moderna's vaccine, especially after the second dose, the agency said.

"The increase in risk is seen within four weeks after the vaccination, mainly within the first two weeks," it said.

The Swedish agency said the vaccine from Pfizer is recommended for these age groups instead. Its decision to suspend the Moderna vaccine is valid until Dec. 1.

In Denmark, people under 18 won't be offered the Moderna vaccine out of precaution, the Danish Health Authority said Wednesday. It said that data show that there is a suspicion of an increased risk of heart inflammation when vaccinated with Moderna shots, although the number of cases of heart inflammation remains very low.

In non-EU member Norway, the Norwegian Institute of Public Health urged young people under 30 to opt for the Pfizer vaccine "due to an increased risk of a rare side effect" with Moderna.

In Denmark, children and young people ages 12-17 have primarily been invited to receive the COVID-19 vaccine from Pfizer.

Retain nurses before recruiting nurses from other provinces: association

Efforts to lure nurses from other provinces are underway in several parts of the country, but the head of a national nurses association says the poaching won't solve anything unless working conditions are improved.

Auschwitz-Birkenau survivors and other mourners commemorated the 78th anniversary Friday of the liberation of the Nazi German death camp, some expressing horror that war has again shattered peace in Europe and the lesson of Never Again is being forgotten.