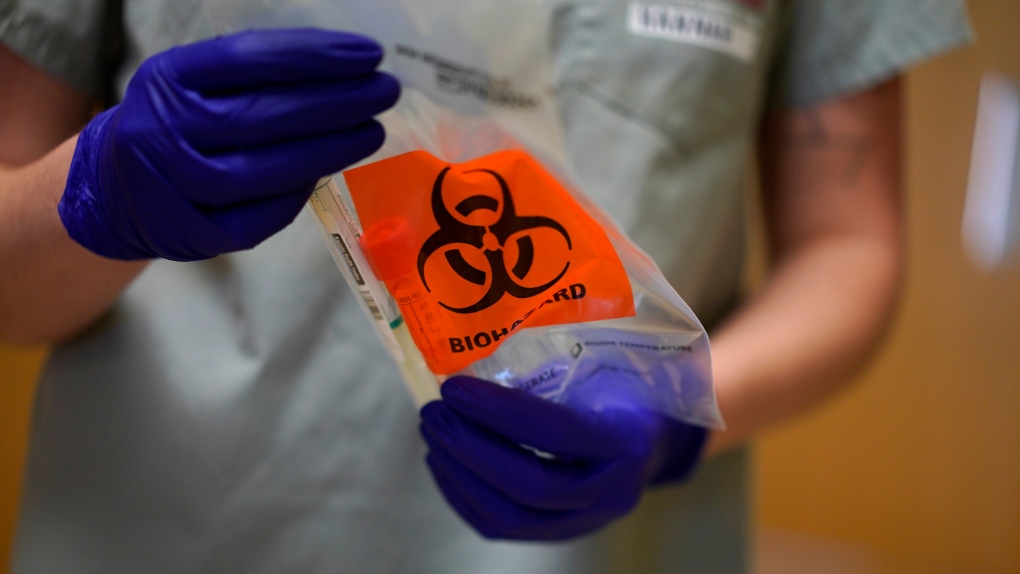 Team Rubicon volunteer, EMT Hannah Tellier, from Boston, holds a COVID19 test in the emergency room of the Kayenta Health Center on the Navajo reservation in Kayenta, Arizona, on April 23, 2020. (Carolyn Kaster/AP/CNN)

The Navajo Nation has surpassed New York and New Jersey for the highest per-capita coronavirus infection rate in the U.S. -- another sign of COVID-19's disproportionate impact on minority communities.

The nation has one of the strictest stay-at-home orders in the country, mandating that residents not leave their homes unless there is an emergency or they are essential workers.

Even those who leave home for work must have documentation on company letterhead with a verifiable contact number for a manager in order to go.

For the last few months the nation has been on weekend lockdowns to prevent members from being out and risking infection but case numbers have continued to rise.

Other minority groups also have been hard hit by the coronavirus.

Of the 39 states and the District of Columbia reporting the race and ethnicity of residents who have died of COVID-19, African Americans make up about 13% of the population in those places but 27% of COVID-19 deaths, according to an analysis from the American Public Media (APM) Research Lab.

Nez said there has been a huge spike in cases among the population, resulting in 140 deaths for the entire nation as of this weekend.

A press release from the Navajo Nation issued Saturday said that experts projected cases would peak in their population in mid-May.

Part of the reason for the spike is increased testing capacity, Nez said. More than 23,791 members, or 11% of the population of the Navajo Nation, has been tested for the virus.

Another reason for the large number of cases is that multiple generations live in one home, Nez said.

"When one person gets Covid, goes home, they turn to infect the rest of the family," Nez said.

Additionally, 30% to 40% of residents do not have running water, Nez said. That prevents everyone from being able to wash their hands as often as recommended.

Another challenge: the nation is a "food desert," which means that more people are at the few grocery stores, convenience stores and gas stations to purchase food, Nez said.

"When we run out of food or supplies we have to go to the stores and there is a lot of people there and I believe...the spread is happening there as well as at home," Nez said.

In a Saturday press release, Nez urged residents to continue to stay in lockdown as much as possible and maintain good hygiene practices.

"With every passing day, we are a day closer to beating COVID-19. Whether we realize it or not we are winning the war on this virus," Nez said in the press release. "We have to stay the course when it comes to staying home as much as possible, wearing masks in public, washing our hands often, and taking every precaution to ensure our health and safety especially for our elders and children."

Loss of taste or smell added to official list of coronavirus symptoms in U.K.