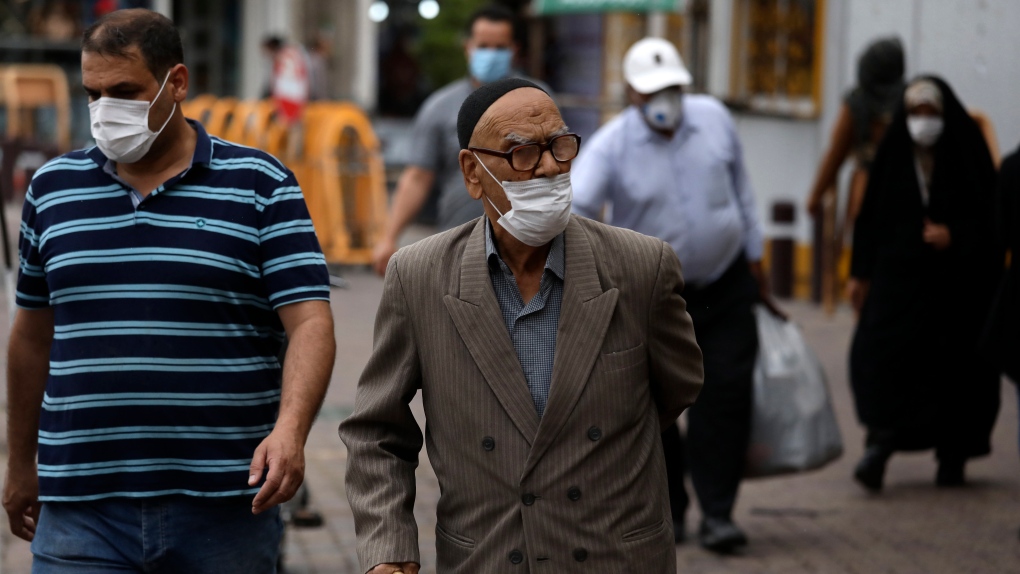 People wearing protective face masks to help prevent the spread of the coronavirus walk on a sidewalk in the city of Zanjan, some 330 kilometers west of the capital Tehran, Iran, Sunday, July 5, 2020. (AP Photo / Vahid Salemi)

TEHRAN, IRAN -- Iran on Sunday instituted mandatory mask-wearing as fears mount over newly spiking reported deaths from the coronavirus, even as its public increasingly shrugs off the danger of the COVID-19 illness it causes.

Supreme Leader Ayatollah Ali Khamenei publicized an image of himself in a mask in recent days, urging both public officials and the Islamic Republic's 80 million people to wear them to stop the virus's spread.

But public opinion polling and a walk through any of the streets of Tehran show the widespread apathy felt over a pandemic that saw Iran in February among the first countries struck after China. Whether rooted in fatigue, dismissal or fatalism, that indifference has scared Iranian public health officials into issuing increasingly dire warnings.

"Let me first thank our great people," a health worker in a hazmat suit in a hospital corridor sarcastically bellows in one dark state TV spot. "You hand in hand with the coronavirus defeated us!"

The new rules mark a turning point for Iran, which has struggled in trying to balance provincial lockdowns to stop the virus's spread with the fears of stalling out an economy already struggling under U.S. sanctions after America's unilateral withdrawal in 2018 from Tehran's nuclear deal with world powers. Religious considerations also played a role in this Shiite theocracy as authorities declined for weeks to close shrines where the faithful touch or kiss the tombs' protective bars.

For a moment, it appeared the restrictions and public fear had worked, as reported new cases and deaths from the virus dropped to their lowest levels in May. But new cases soon rose again, with officials initially saying better testing causes the numbers to spike even as they lifted restrictions to boost economic activity.

Fears persist that Iran's actual death toll from the virus may be nearly double its reported figures, as a parliamentary report in April suggested. Masoud Mardani, a member of the country's coronavirus task force, recently said that sampling from random antibody tests suggest that 18 million Iranians have so far been afflicted by the virus, without elaborating. Iran has only reported over 240,000 confirmed cases.

"We see that some consider being infected with the virus bad and hide it," a mask-wearing President Hassan Rouhani said Saturday, according to a transcript on the presidency's website. "If someone knows that they have been infected with coronavirus, they have a religious and human duty to inform others about it."

To fight the virus's spread, the Iranian government issued the mask mandate. The new rules require those in Tehran's subway, riding buses or indoors to wear them. Rouhani said those seeking "public services" also will be required to wear a mask.

Up until this point, wearing a mask in Iran had been encouraged but remained a personal choice. It follows the changing views and mixed messages of the scientific community over the usefulness of masks since the pandemic began.

The U.S. Centers for Disease Control and Prevention in April began urging Americans to cover their faces to stop the virus. In June, the World Health Organization changed its advice, recommending that people wear fabric masks if they could not maintain social distancing, if they were over age 60 or had underlying medical conditions. Those masks also help prevent the asymptomatic from spreading the virus as well.

Worldwide, rules for mask wearing vary by country. In Asia, masks are mandatory in countries like Indonesia, the Philippines, Singapore, South Korea, and Thailand. In China, people commonly wear masks, which are required in certain areas. Japan urges people to wear masks in certain circumstances, but it's not mandatory. And despite mandatory masks rules in India, the poor reuse masks for days while physical distancing remains rare.

In the Mideast, masks are mandatory in nations including Egypt, Iraq, Israel, Lebanon, Pakistan and the United Arab Emirates, although enforcement varies.

In Iran, people remain unenthusiastic about wearing masks, although it hasn't become a political statement like it has in the U.S. Instead, it appears to be one of fatigue.

The state-owned polling centre ISPA published a June survey of 1,055 Tehran residents showing only 41% remain highly worried about the virus, down from 46% in May and 58% in April. The survey offered no margin of error.

That lack of concern also can be seen in media reports suggesting most of the new coronavirus patients attended weddings, parties and funeral services with large groups of other people. The renewed spike in cases also coincided with Eid al-Fitr, the holiday marking the end of the Muslim fasting month of Ramadan that sees people celebrate with their loved ones.

At two busy gas stations, an Associated Press journalist counted only 15 of 95 drivers wearing masks, while two of the stations' 11 employees wore them.

"It is useless to wear mask," argued Mohammad Ghasemi, a 27-year-old employee of one of the stations. "I use the metro twice a day when it's packed with people without (social) distancing."

The cost and quality of masks also remains a concern. Masks range from the equivalent of 10 U.S. cents to $3, which can be a lot, as the Iranian rial has fallen to historic lows against the dollar.

And in a nation where over half its people are under the age of 35, the virus hasn't been an overwhelming concern for its youth -- even as it can be fatal for older people and those with a preexisting condition. That was the feeling 23-year-old Hamid Sharifi had as he smoked a cigarette on a Tehran street.

"I think it's not as dangerous as they said in the beginning," said Sharifi, unmasked, before walking away into the crowds of the capital.

"If we continue like this, our hospitals will be full and patients should lie on streets," he said. "We are getting closer to the brink of catastrophe."

Loss of smell, taste can linger longer than other COVID-19 symptoms: study

Would you like a mask with that? PPE once again available at Alberta drive-thrus