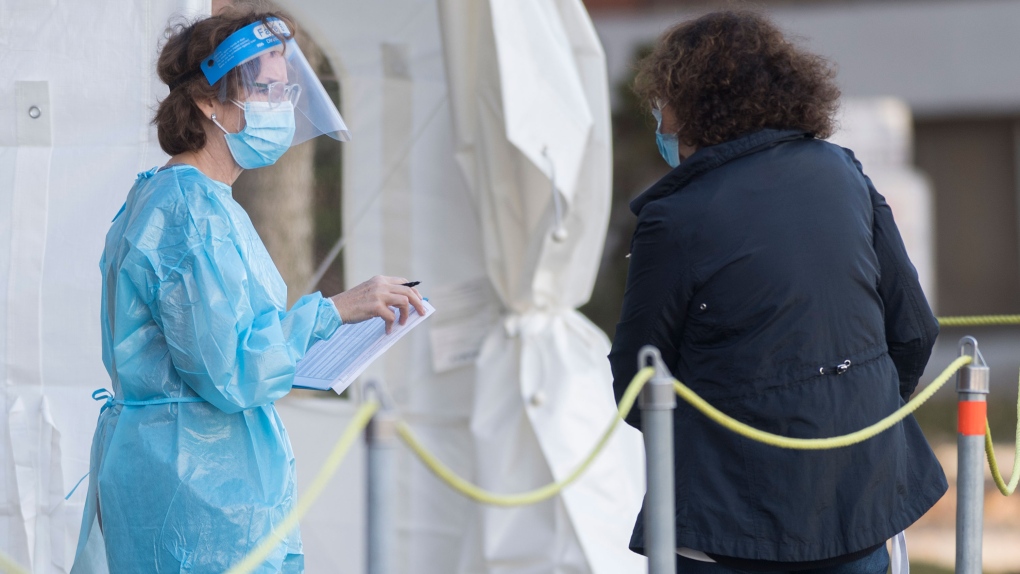 A health-care worker talks to a woman at a COVID-19 testing clinic in Montreal, Sunday, November 8, 2020, as the COVID-19 pandemic continues in Canada and around the world. THE CANADIAN PRESS/Graham Hughes

TORONTO -- The Canadian company behind a new plant-derived COVID-19 vaccine candidate has released the results of their Phase 1 clinical trials, saying two doses of their adjuvanted vaccine spurred a significant antibody response in 100 per cent of the trial subjects.

"They're even better than we had hoped," Nathalie Landry, executive vice president of scientific and medical affairs at Medicago, said of the results.

"When we talk about neutralizing antibody responses, we say it's quite remarkable, especially when we compare with a subject that recovered from the disease."

Those who received the Medicago adjuvanted vaccine in the Phase 1 trial actually had higher antibody levels than the levels found in those who had contracted COVID-19, Landry told CTVNews.ca in a phone interview.

Medicago, a company based in Quebec, launched their first human trials in July.

In Phase 1, they looked at around 180 healthy subjects between the ages of 18 and 55. Participants were given either the vaccine on its own, or the vaccine with one of two adjuvants mixed in: GlaxoSmithKline (GSK)'s pandemic adjuvant or Dynavax's CpG 1018.

An adjuvant is a substance that is added to vaccines in order to boost the effects and enable a higher immune response. They can be made from a variety of materials, including plants, aluminum and squalene oil, derived largely from sharks. Researchers wanted to measure what difference adding each adjuvant would make for the immune response.

They found that the vaccine candidate on its own did produce antibodies in the subjects, but demanded a much higher dosage level in order to get proper results.

It was the adjuvanted vaccines that really had an effect.

After two doses of adjuvanted vaccine — no matter which adjuvant was used — the antibody response rose significantly. However, subjects developed anti-spike IgG antibodies after a single dose of the vaccine when mixed with the GSK adjuvant, according to the press release.

"[GSK's was] the adjuvant that provided us with the best immune response at [a] very low dose," Landry said.

She explained that although they tested three doses at 3.75, 7.5 and 15 micrograms, the antibody response did not increase as the dosage went up.

"We only need 3.75 micrograms to get to a very significant level of antibody and cellular immune responses," she said.

Being able to spur an immune response at a lower dose means they would be able to manufacture more of the vaccine -- if it clears the rest of the phases.

In October, the company announced that they had reached an agreement with the federal government to supply Canada with up to 76 million doses of their vaccine, subject to approval from Health Canada.

The success of the GSK adjuvant means that moving forward, Medicago will be using only their vaccine candidate mixed with GSK's pandemic adjuvant in further trials.

This phase also proved the safety of the vaccine candidate to proceed to further trials, as no subjects had any severe adverse side-effects, only mild and short-lived side-effects, according to the release.

HOW PLANTS PLAY INTO VACCINE DEVELOPMENT

Medicago's vaccine candidate is different from many of the others currently in human trials in that it uses "coronavirus virus-like particles" (CoVLP), which mimic the virus to spur an immune response without introducing any form of the actual virus to the human body.

Their adjuvanted vaccine can trigger both of these, she said.

In order to make their vaccine, Medicago uses plants as, essentially, living factories to produce the antigen in the vaccine that spurs an immune response. This is achieved through recombinant technology: genetic code is transferred to a plant, at which point "the plant will start expressing that antigen like if it was its own," according to Landry.

The plant they use is called nicotiana benthamiana, a relative of tobacco plants, which grows quickly and can "produce a huge amount of proteins," she said, making it a prime host for biopharmaceuticals.

"This is 20 years of development, that is behind this innovative manufacturing technology," Landry said. "And this is something that has been developed in Canada."

In Phase 2, they will be studying more subjects, as well as those in other age groups not included in the first trial. It will involve around 600 subjects, between the ages of 18 and 64.

"We also evaluate elderly people, make sure that we actually took the right dose, and we have a group safety and immunogenicity profile," Landry said.

In the final phase of the clinical trials, Medicago hopes to enrol around 30,000 subjects in different regions across the globe.

"Why we need to go global is that to prove the efficacy of the vaccine, you need to go in regions where the virus is circulating," she explained.

Phase 3 is when the efficacy of the vaccine really gets tested, she said, so while the results from Phase 1 are promising, and support further trials, they don’t know yet if the vaccine will actively prevent transmission of the virus.

"But that's the idea," she said. "You have a high level of antibodies that can neutralize the virus, so you will prevent infection and therefore, hopefully transmission of the virus as well."