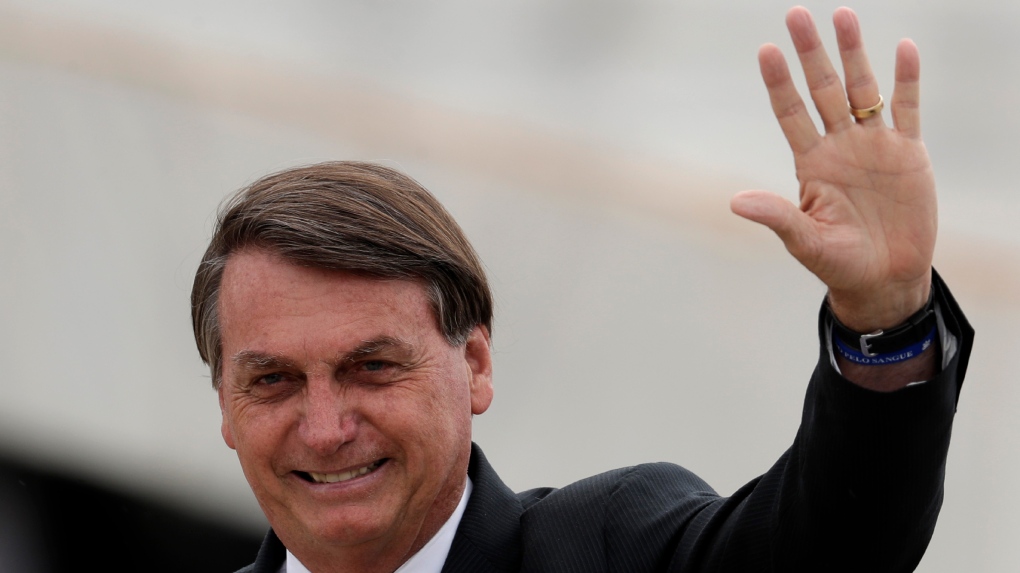 SAO PAULO -- Brazilian President Jair Bolsonaro says he won't take any working COVID-19 vaccine himself and calls the use of masks to limit the spread of the disease "the last taboo to fall."

Bolsonaro's comments, broadcast on his social media channels Thursday night, alarmed health experts who said they could undermine efforts to achieve vaccination levels essential to halting the pandemic and might scare off vaccine makers negotiating with local authorities.

Bolsonaro also said, however, that any shot that is certified by Brazil's health agency will be available for free to the public.

The Brazilian president, who contracted the virus in July, has long resisted the advice of most scientists and health experts to restrict social and economic activity, arguing that damage from a lockdown would be worse than the pandemic.

He also repeatedly promoted an anti-malarial drug as the cure for the disease despite scientific studies finding it ineffective and possibly dangerous, and criticized state governors testing a Chinese shot at home.

"I tell you; I will not take (any vaccine). It is my right and I am sure that Congress will not create difficulties for whoever doesn't want to take a vaccine," he said.

"If it is effective, lasting, reliable, whoever doesn't take it will be doing harm only to himself, and who takes the vaccine will not be infected. There's nothing to worry about," Bolsonaro said.

A study published July 15 in the American Journal of Preventive Medicine found that social distancing measures can safely be halted if at least 75% of the population gets a vaccine that is more than 70% effective. Tests have shown some vaccine candidates have a potential efficacy higher than that.

"If he were a less popular president, this might have little effect, but he is the hero of a lot of people," Lago told The Associated Press.

"His hardcore supporters might not get a shot and that will generate more political dispute on the right not to get vaccinated. That will make it harder for Brazil to get above that minimum level of 70, 75% of the population vaccinated, which is key for life to go back to some kind of normal."

Some sensitive groups, such as cancer patients and pregnant women, may not be able to take COVID-19 vaccines and will still be susceptible to the virus.

More than 171,000 people have died of COVID-19 in Brazil, second only to the United States.

"Forcing people to take the vaccine or say that who doesn't take it cannot get a passport, have a public job, that's dictatorship," the Brazilian president said. "Whoever defends that is a dictator. Or a false dictator that is willing to do business with the lives of others."

Brazil's federal government has a deal to get up to 100 million doses of the Oxford-AstraZeneca vaccine candidate if it works. Other developers, such as Pfizer, are reportedly offering deals to Bolsonaro's administration. Sao Paulo state, the epicenter of the crisis in Brazil, has an agreement to buy a vaccine made by Chinese company Sinovac, which is in the final phase of testing.

Bolsonaro also cast doubt on the use of masks to halt the spread despite the fact most health experts, including Lago, say numerous studies since the pandemic began have found them to be effective.

"The matter of the masks, there will be a serious study sometime to talk about the effectiveness of the mask," Bolsonaro said. "It is the last taboo to fall."

At the beginning of the pandemic, Bolsonaro often ventured out of Brazil's presidential palace unmasked to greet supporters, which he did less frequently after contracting the virus himself.