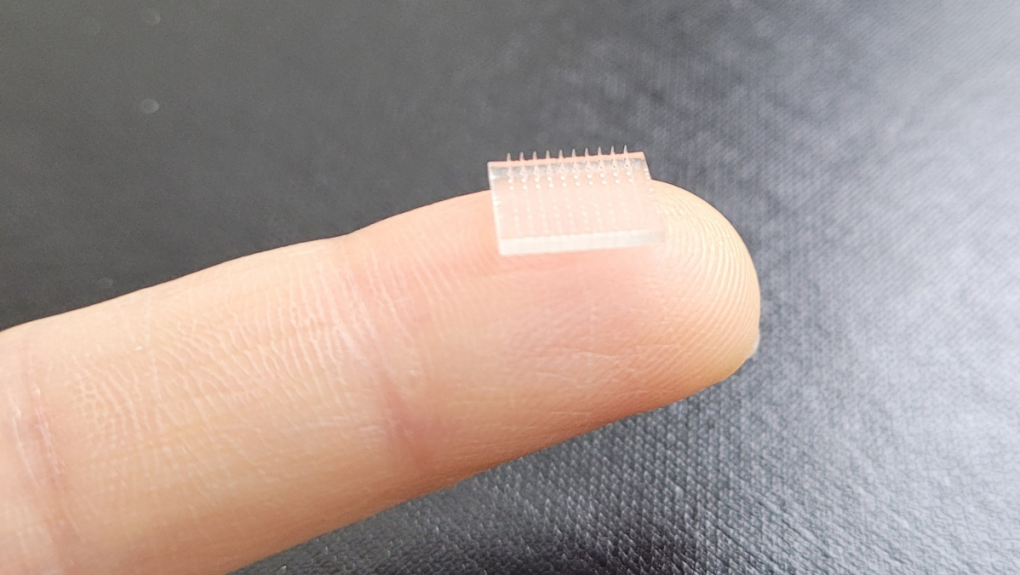 Researchers from Stanford University and the University of North Carolina at Chapel Hill say that their 3D-printed vaccine patch can offer an immune response that's much stronger than a vaccine delivered with a traditional jab. (UNC-Chapel Hill)

TORONTO -- A team of scientists have developed a painless way to deliver a vaccine shot without the use of a needle while offering a better immune response, they say.

Researchers from Stanford University and the University of North Carolina at Chapel Hill say that their 3D-printed vaccine patch can offer an immune response that's much stronger than a vaccine delivered with a traditional jab.

As described in their paper, published in the journal Proceedings of the National Academy of Sciences in August, the polymer patch is one square centimetre in size and contains 100 3D-printed microneedles. The needles are 700 micrometres long; just barely long enough to penetrate the skin and deliver the vaccine.

When tested on mice, the researchers found that the vaccine patch generated an antibody response that was 20 times higher than a traditional needle shot after three weeks and 50 times higher after a month.

Needle shots typically bypass the skin and are instead injected in the muscle or the subcutaneous space, which refers to the layer of tissue underneath the skin. But because the skin is rich in immune cells, vaccines delivered into the skin cells, known as intradermal vaccination, often have improved efficacy, researchers say.

However, intradermal vaccination is difficult to administer with traditional needles and can be painful for the recipient.

Researchers say the vaccine patches with microneedles can solve these problems, providing an easy and painless way to deliver intradermal vaccines. This could also potentially reduce vaccine hesitancy for people who suffer from needle phobia, they say.

Needle shots typically need to be administered by trained professionals and have to be stored in freezers or refrigerators. However, vaccine patches have the vaccine embedded in the patch, which means that the vaccine can be self-administered and does not require any special storage units.

"In developing this technology, we hope to set the foundation for even more rapid global development of vaccines, at lower doses, in a pain- and anxiety-free manner,” said lead researcher Joseph DeSimone in a news release.

While microneedles aren't new, co-lead author Shaomin Tian says that manufacturing challenges have held back the development of this technology. It's difficult to mass-produce microneedles that are adapted to different types of vaccines and are sharp enough to penetrate the skin, she explained.

“Our approach allows us to directly 3D print the microneedles, which gives us lots of design latitude for making the best microneedles from a performance and cost point of view,” she said in the news release.

The research team's next step is to integrate the COVID-19 mRNA vaccines from Pfizer and Moderna into the patches.

“One of the biggest lessons we’ve learned during the pandemic is that innovation in science and technology can make or break a global response,” DeSimone said.

Denied cross-border shoppers, some U.S. companies opt to export to Canada instead

'We will not boost our way out of this pandemic,' CDC director says as 70 million eligible Americans remain unvaccinated