Brain training games could help us drive longer into our golden years: researchers

Can you train your brain to drive longer into your golden years? 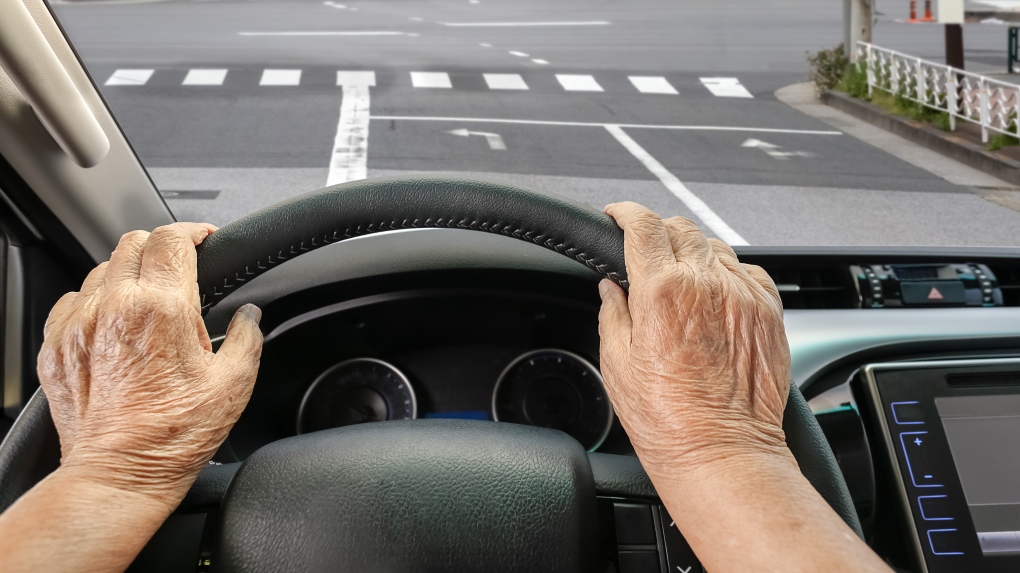 For the elderly, the loss of a driver’s licence could mean the end of independence and the beginning of a decline in health, with far-reaching consequences in their daily lives.

With over 3.5 million drivers who are 65 and older in Canada, according to data from 2010, there has been more discussion about what can be done to help ensure older drivers stay on the road, safely.

New assistive driving technologies seem like an obvious solution in the years to come, but buying new vehicles can be too expensive; while options like going for adult driving lessons can be too great a blow to some seniors’ pride. Now, scientists claim that there’s another option available to help older drivers maintain their abilities on the road. 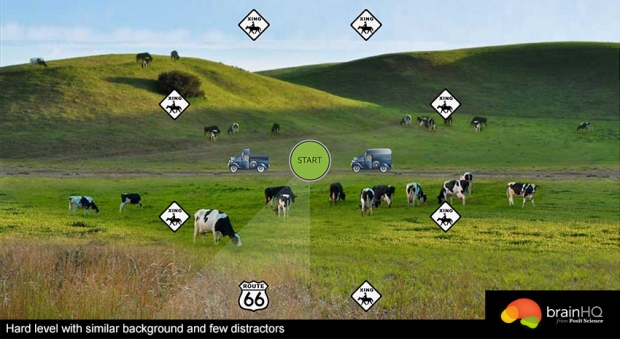 Cognitive training games like those available from companies like Posit Science or Cognifit claim to be able to make you a better driver through online exercises that take only minutes a day to complete. It’s a bold claim, but one you’ve likely heard before, with past research finding that everything from Mario Kart to Call of Duty can make you a better driver.

Where these programs differ, however, is that they offer exercises that specifically target mental abilities like attention, processing speed, and navigation, which directly affect a person’s driving abilities, rather than merely showing an increase in general motor skills.

The exercises differ in what you must do, but the general idea is the same: they force you to focus on numerous stimuli at the edge of your field of vision, dividing your attention and making your brain work to process increasingly complex information in less time. Over time, these exercises effectively work to de-age the brain.

The area of vision from which information can be taken in with a single glance is called a “useful field of view,” or UFOV, and with age, this field narrows, as the brain takes longer to process information on the periphery. 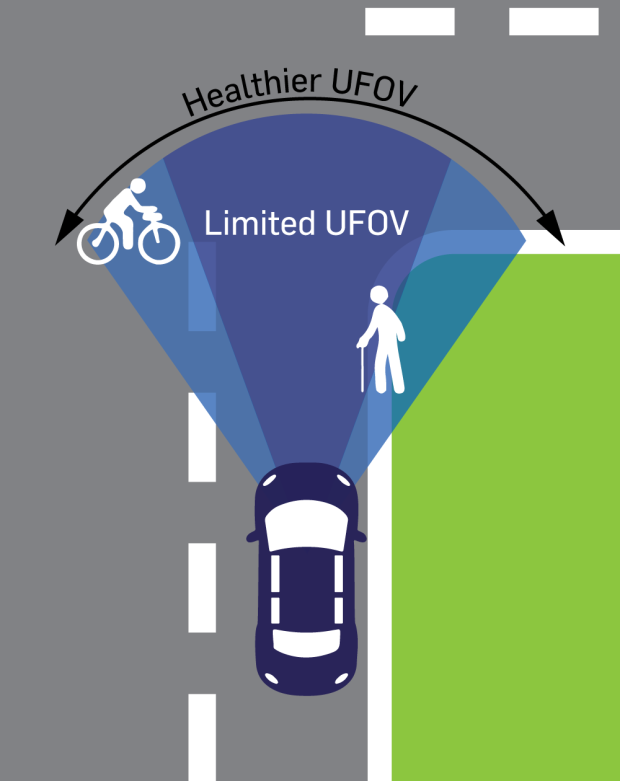 Leslie Ross, Associate Professor of Human Development and Family Studies at Penn State University, says that this decline in cognitive processing can affect our ability to drive more than we realize.

“When we look at vision and cognition,” Ross told CTVNews.ca, “cognition seems to be a better predictor of unsafe driving compared to vison.”

Barring extreme cases like severe visual impairment, cognitive speed plays a greater role in safe driving in elderly motorists than more commonly discussed issues like declining vision and motor skills. The ability to quickly interpret and react to incoming visual information could make the difference between hitting something that darts in front of your vehicle and being able to safely stop in time.

The science suggests that brain training games can effectively help older drivers speed up processing and rebuild their field of vision. The ACTIVE study in 2010, which tested the effectiveness of cognitive intervention in maintaining cognitive health and functional independence in older adults, has shown that use of games like this can greatly impact the brain’s speed of processing. The study saw participants take part in cognitive training exercises in ten 60-75 minutes sessions over the course of multiple weeks. 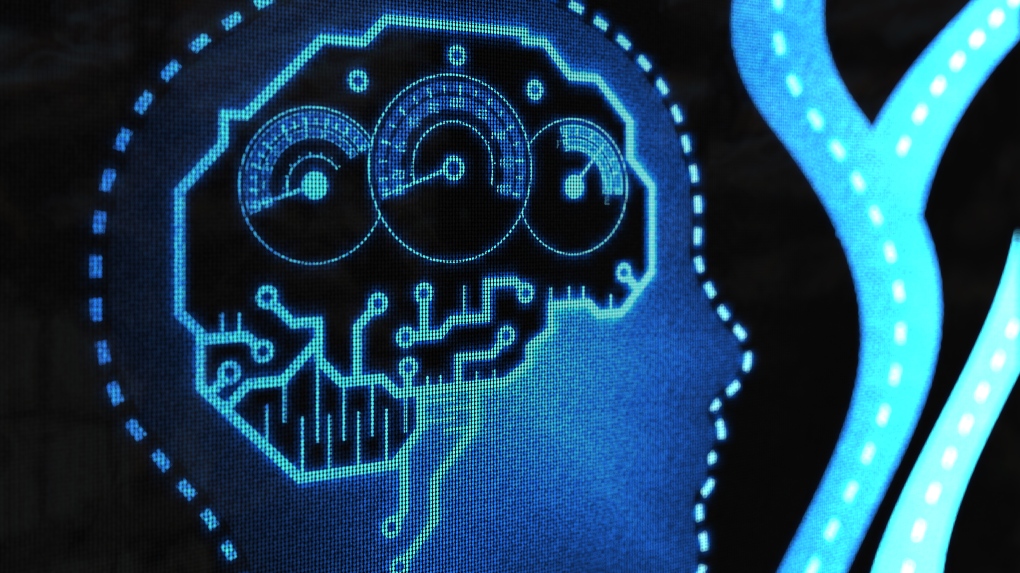 Researchers found that the use of brain training games designed to improve speed of processing had the greatest effect on participants, reducing the risk of at-fault accidents by almost 50 per cent over a six-year follow-up period. They also found that participants who did speed of processing training were 40 per cent less likely to cease driving over the subsequent three years than those who were in the control group.

“And you have to keep in mind people were doing between ten and 18 hours of training,” said Ross, “and we’re finding those effects – that’s huge.”

In fact, brain training might be the most successful method for older drivers to see tangible changes in their driving abilities, showing more promising results than traditional road training. “It’s completely fine to take a class – you may learn some tips and tricks,” said Ross, “but as far as the research goes, it doesn’t typically seem to have a big impact on crashes.”

A 2005 study by Cynthia Owsley and others tested the effect of driver educational programs for high-risk older drivers and found no evidence that they enhance driver safety in regards to crash-rate. They did find,however, that exposure to such programs led to increased self-regulation by participants, where they chose to limit their driving exposure and avoided challenging road situations.

While the results of brain training seem promising, it’s important for potential users to be discerning - not all brain training is created equally. “I think one of the things that makes this whole area a challenge is that so many people are using the word like cognitive intervention or brain game,” said Ross, “and it can mean so many different things.”

Companies will offer brain training, which could be something as complex as a lab-tested cognitive assessment, or as simple as crosswords or sudoku puzzles. And while both might be enjoyable, the benefits they’ve been proven to offer are wildly different.

Users need to determine what skills they as an individual need to improve, then find a program that fits, and is backed by reputable research. SharpBrains, an independent brain science applications market research firm, is one resource that can be useful, offering a ten point checklist to help evaluate whether a brain training program is right for you.

Above all, Ross recommends that potential users do their research before committing to any one product – much like physical exercise, cognitive training is not a one-size- fits-all situation.

Related:
More seniors dying on Canadian roads than any other group
Made-in-Canada solutions to seniors dying on the roads
How a refresher course helped me become a more confident driver
How advanced driver training can make anyone a better driver
10 tips from the pros to improve your driving right now
How new safety technology might actually be making our driving worse
Driver’s quiz: Put your driving IQ to the test
Why driverless cars are further off than we think