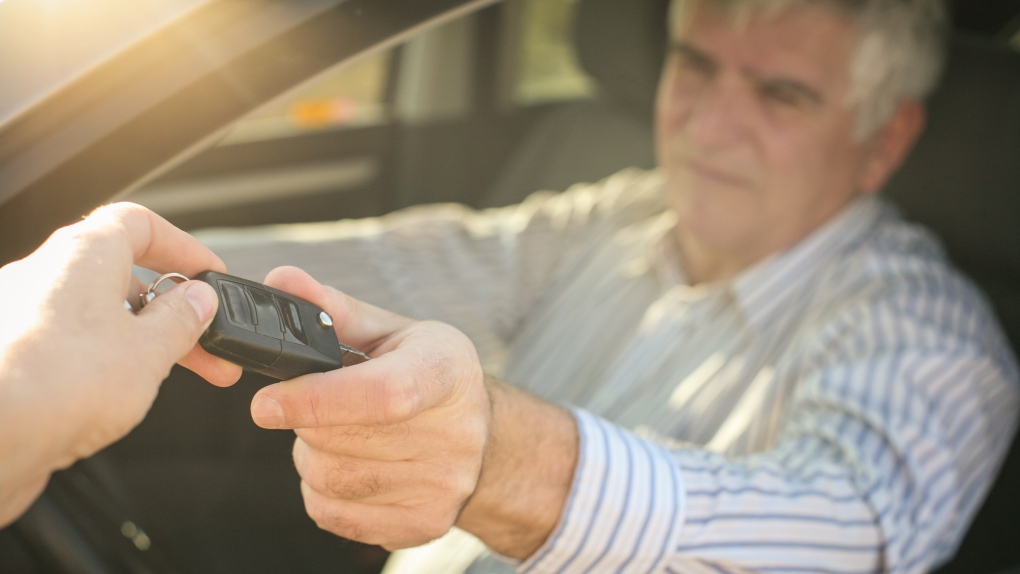 In part one of this special report, CTVNews.ca explored the alarming trend of senior driving deaths in Canada. In part two, we introduce two possible solutions.

A few years after Garth Helland’s mother, Gean, 80, was given the all-clear to stay on the road, she had three fender-benders in the same year. For her son, it was the last straw.

Once again, Garth, 57, insisted that his mom get tested by a geriatric specialist. This time, the specialist recommended that she undergo a test by a private company.

“She told the doctor to stick it in his ear,” Garth recalled. “She fought it until we got her to DriveABLE.”

In 1995, a team of Alberta researchers led by Dr. Allen Dobbs, a University of Alberta professor and a director of the Northern Alberta Regional Geriatric Program’s neurocognitive research unit, started looking into a way to test drivers who were still on the road and had a medical condition that impaired their cognitive abilities, such as a concussion.

They researched, but no such test was found. So they decided to make one of their own.

The DCAT uses a touchscreen and three buttons to test 22 weighted markers such as reaction time, motor control, executive function and field of vision.

The 45-minute test is carried out by a trained facilitator, who guides the participant and gives them the opportunity to practice the tasks. Each patient inputs their age and sex, and their results are compared against that demographic.

At no point during the test does a driver actually enter a car.

At the end, a patient is awarded a score between 1 and 99. The lower the score, the lower the driver’s risk on the road.

“We don’t discriminate against age, we look beyond age.” — PJ Barclay, President and CEO of DriveABLE

The Canadian-made test, developed privately and sold to governments and private organizations across North America, is now available in nine provinces. DriveABLE President and CEO PJ Barclay cites a “driving tsunami” of aging Baby Boomers across North America to explain the importance of the test. He estimates that 85 to 90 per cent of people who undergo the DCAT are seniors, many of whom are referred by their doctors or family members.

“We don’t discriminate against age, we look beyond age. But we do know as an individual does age, there is a closer correlation to cognitive impairment,” Barclay told CTVNews.ca.

British Columbia adopted the DCAT into its provincial testing program, but decided to phase out the in-office, computer-based test starting in March, citing consultations with experts and assessment of a variety of approaches.

While B.C. no longer uses the test, its experience offers an interesting glimpse of how one province approached the issue of testing senior drivers.

Before March, doctors in B.C. who suspected their patients may have cognitive impairment, either due to age or injury, could refer them to take the two DriveABLE tests.

If they performed well on the touchscreen DCAT, a score between 0 per cent and 25 per cent, they were usually considered fit to drive. If a driver scored 26 and higher, they were typically required to take an on-road cognitive test called the DriveABLE on-road evaluation (DORE).

The overwhelming majority of B.C. drivers referred to take the DCAT didn’t score well. Out of 644 people who took the test in 2016, just 18 people – or 3 per cent – scored between 0 and 25. The other 97 per cent showed signs of cognitive impairment, according to the test.

In fact, numbers provided by the B.C. Ministry of Public Safety show that 62 per cent of those tested got the lowest possible scores, between 73 to 100, showing that they were “highly affected” by cognitive impairment.

The DCAT has faced plenty of criticism, especially from seniors’ advocacy groups, who have said that a touchscreen test is hardly the right technology for testing a person’s ability to drive.

B.C.’s new test, called the enhanced road assessment, or ERA, extends the amount of time seniors are given during re-examination periods and allows drivers to use their own vehicles for the on-road test.

A B.C. seniors group said it was happy with the government’s decision.

“No one wants unsafe drivers on the road, regardless of age. The changes will be welcome news to many of our members who have heard of or experienced challenges with computer-based testing,” said Gudrun Langolf, acting president of the Counsel of Senior Citizens Organizations of B.C., in a press release.

Barclay insists that the DCAT is not a pass-fail system – it flags risk – and says that the technology is no more complicated than using an ATM machine.

He also insists the DCAT isn’t an “iron curtain” that seniors need to pass through to ensure that they keep their licences, but rather part of a “tapestry of evidence” available to licensing authorities.

Debunking the “pass-fail” perception was particularly difficult in B.C. Before 2012, B.C. drivers who scored 70 or higher on the DCAT were considered a “fail,” and they were not given the option to take a road test. In many cases, these drivers may have lost their licences.

But, after public outcry, the province changed its protocol to give drivers the option to choose whether they wanted to take a road test if they scored 26 per cent of higher. Now, it has gotten rid of the approach altogether.

When Gean took the touchscreen test, the results were clear: she showed obvious signs of cognitive impairment. She was given the option to take an on-road test, but she’d already made up her mind. She decided to give up her licence on the spot.

That was in May. Since then, Gean’s health has declined to the point that she relies on oxygen and struggles to walk on her own.

“I can’t comprehend how she would still be able to drive today,” Garth said.

While DriveABLE is working to make its tests available across the country, Candrive, the research group led by Dr. Shawn Marshall, has its own tool under development.

By studying the habits of hundreds of older drivers, Candrive has developed a risk stratification tool: a test that could be administered by healthcare providers to patients who have concerns about their abilities on the road.

The test, which has been in the works since 2009, is in its final stages of analysis and is awaiting peer review. Developers have not released specific details of the test pending anticipated publication in a scientific journal.

But Dr. Marshall gave CTVNews.ca an early sense of how the test will be carried out.

The test would assess several predictors that relate to a person’s driving safety, and the results will place patients within risk categories relative to others.

“Then you can make an informed decision,” Dr. Marshall said.

A second “self-assessment” tool is under development. It would allow anyone at home to take a simple online test to assess their risk.

Response bias – that is, a lack of complete honesty with your doctor, possibly out of fear of losing your licence – could affect the physician-led test. Dr. Marshall expects that wouldn’t be a problem for the in-home test.

“If you’re doing it online by yourself, you’re only lying to yourself,” he said.

However, the doctor-led test is designed to be a more rigorous tool that gives patients a more accurate result. The in-home test, while still helpful, is a more stress-free alternative that would give patients a rougher sense of their risk level.

If all goes according to plan, the doctor-led test should be made public in spring 2018. The in-home test is still in development.

The goal, Marshall says, is that Candrive’s test could be used by doctors across Canada.

It’s an ambitious goal, especially considering that similar tests are administered on a province-by-province basis.

But it’s not unachievable. The research team has already had informal consultations with provincial ministries of transport, researchers and family physicians across Canada. The test is designed using national data collected in cities across the country, including how older drivers respond to snow and ice in different cities.

“I’m enthusiastic about it,” Dr. Marshall said. “I have presented it at a few conferences now, and it’s been very well received, and I’ve gotten some really good feedback on how this should be used.”

One major difference between the DriveABLE test and Candrive’s risk stratification tool is who administers them. In B.C., the DCAT is used by licensing authorities and administered to drivers who’ve been referred to take the test.

Marshall says Candrive’s physician-led test would be a part of a doctor-patient relationship and would put the power into a patient’s hands to determine whether or not they should alter their driving habits.

Ideally, doctors and health care practitioners would have access to the tool through an app, and physicians would be able to use the test results to pinpoint underlying health problems that may be hindering a person’s driving ability.

The test’s ultimate goal is to extend the time seniors can safely drive.

For Marshall, that’s an important distinction. He says taking away someone’s licence can have serious physical and mental health consequences, and should only be used as a last resort.

“I would also hate to think that the tool would be used in a way to say, ‘Oh, you’re high risk. Let’s remove your licence right away and too bad for you.’ Because when you lose your licence, it is debilitating.”

Insurance company State Farm Canada conducted a survey in 2016 that asked 1,017 respondents how their family members reacted when they approached them about giving up their licence.

Seventy-eight per respondents said they faced some form of pushback from their family member.

The report also asked 507 senior drivers what would make them consider giving up their licence. Concerned family and friends? Advice from a medical professional? A collision? A ticket?

The overwhelming majority – 94 per cent – said advice from a medical professional would prompt them to consider getting off the road, with family and friends coming in at 27 per cent, a collision at 14 per cent, and a ticket at 4 per cent.

One reason the conversation is so difficult, Dr. Marshall said, is because of the subtext. It can be hurtful to hear loved ones suggest that your cognitive function is beginning to dwindle.

“Physical disability is easier to quantify; you can have discussions more easily about that. But when it comes to cognition, people are very sensitive about it. And unless you have objective testing, it’s very hard to pick up.”

He says that, when approaching a family member about concerns with their driving, it’s important to come armed with other options – like offering to have family members shuttle them around town or suggesting other forms of transit.

“Everything becomes a barrier if you restrict driving,” Marshall said.

After her poor score on the DriveABLE touchscreen test, Gean was off the road for good. Now 86, Gean lives in a seniors’ home where she is still able to run errands by using the bus.

Garth says he understands why it was so important for her to stay on the road.

“It was her independence,” he said.

“Every year you realize that there is something you have to give up, typically, if you don’t have your health. They just want to hang on.”

Driving Series: Related Stories
• More seniors dying on Canadian roads than any other group
• How a refresher course helped me become a more confident driver
• How advanced driver training can make anyone a better driver
• 10 tips from the pros to improve your driving right now
• How new safety technology might actually be making our driving worse
• Driver’s quiz: Put your driving IQ to the test
• Why driverless cars are further off than we think
• Can you train your brain to drive longer into your golden years?