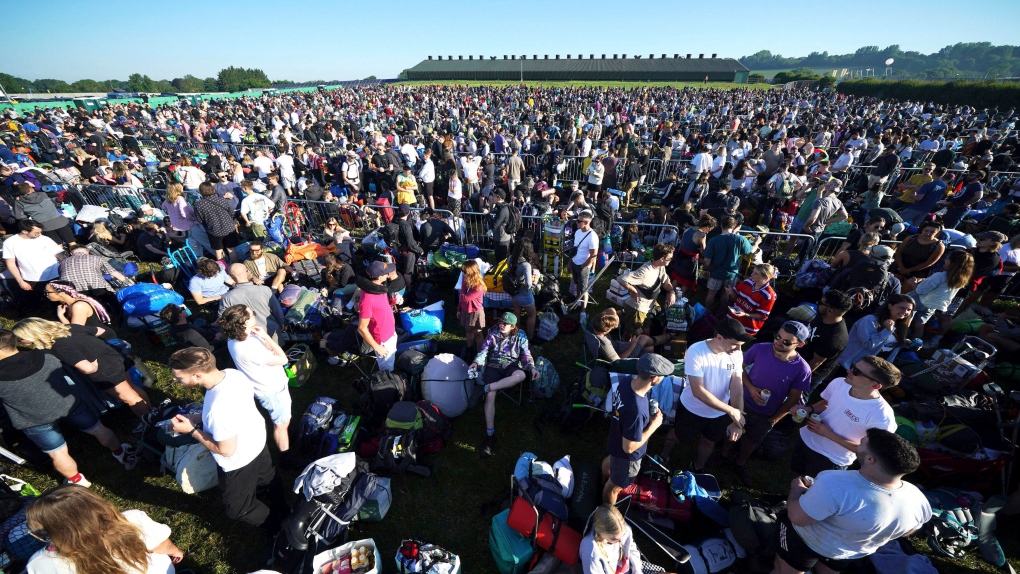 People queue for entry on the first day of the Glastonbury Festival at Worthy Farm in Somerset, England, Wednesday June 22, 2022. (Yui Mok/PA via AP)

Thousands of people are returning to England's Glastonbury Festival as the five-day music and performing arts event reopened Wednesday for the first time in three years after being disrupted by the COVID-19 pandemic.

The festival, which is marking its 50th anniversary, has 3,000 performers scheduled, including Billie Eilish, Diana Ross, Kendrick Lamar and Paul McCartney. McCartney's weekend gig will make him, at age 80, the festival's oldest solo headline performer.

Festivalgoers started lining up to enter the gates at Worthy Farm in Somerset, southwest England, early Wednesday. Many struggled to get to the site because the festival coincided with the largest rail strike that Britain has seen in decades.

Just 60 per cent of trains were expected to run on Wednesday, with more walkouts planned for Thursday and Saturday.

Hundreds of people waited with their bags at London's Paddington Station to try to get on a train to the festival.

"It is my first-ever actual festival. We bought the ticket nearly three years ago. I've been so stressed out about getting there that I haven't even thought about who I am excited to see," she said.

Jenna Conway, 30, thought she could beat travel disruption by getting to Paddington early, but she and a friend were left queuing for hours.

"We got here three hours ahead of our train, we were stupid, we just thought we could jump on any train. We thought they would be kind because of the strikes, but they didn't let us on, so now we wait," she said.

Some 200,000 people are expected to attend the festival, which runs until Sunday.

"The wait has been so long and it's just the biggest build up we've ever had," festival organizer Emily Eavis said.

"Getting Paul McCartney for us is just the ultimate, just the person to have this year to actually bring this whole thing back and bring everybody together," Eavis said. "And what better way to celebrate that than having Paul McCartney himself."