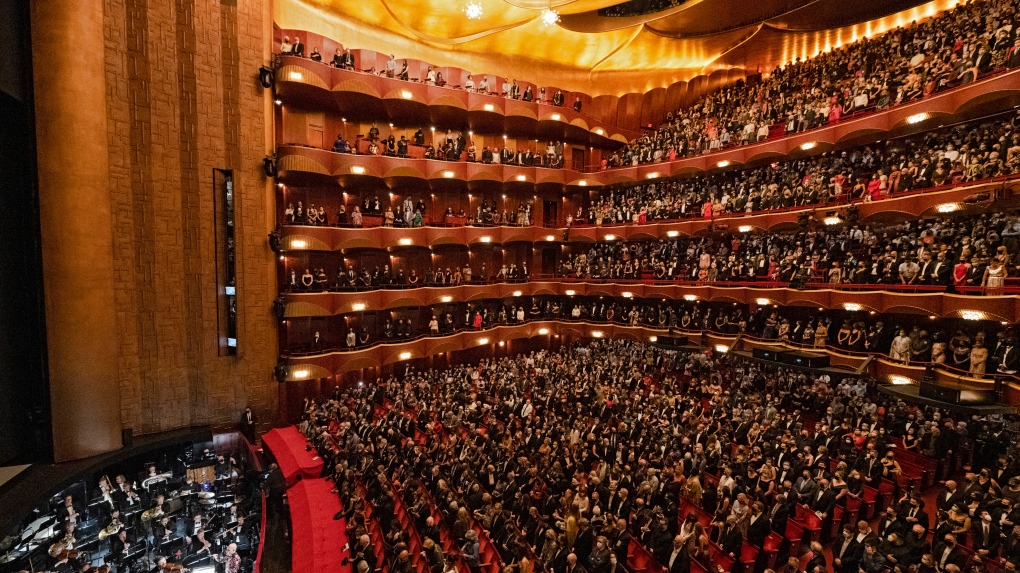 NEW YORK -- "We bend, we don't break. We sway!" sings the chorus in the second act of Terence Blanchard's "Fire Shut Up in My Bones."

That is how much of the audience of about 4,000 in the Metropolitan Opera felt as they watched Monday night' landmark performance, the first staged work in the house since March 2020 and the first by a Black composer in the long history of a company that launched in 1883.

With many of the women wearing evening gowns and jewels and a large percentage of the men in black tie and even a few in white tie, tails and top hats, people greeted each other to celebrate their return to Lincoln Center after an absence they never imagined.

After a historic gap of 566 days, the country's largest performing-arts organization had resumed staged presentations in the start of the season scheduled to run until June 11. The return attracted a far more diverse audience than usually attends the Met and was simulcast live to video screens in Times Square and Harlem's Marcus Garvey Park.

There was a minute ovation for the orchestra at the start, even before "The Star-Spangled Banner" was sung with many a shimmering high note. And when it was over more than three hours later, about nine more minutes of applause for the cast, the composer, librettist Kasi Lemmons, the production team and finally Charles M. Blow, The New York Times opinion columnist whose 2014 memoir was adapted for the opera.

The evening was a triumph for Blanchard, a 59-year-old jazz trumpeter and composer who like Blow is from Louisiana. A wrenching tale of child molestation in segregated northern Louisiana of the 1970s is is beautifully composed with nuances of shade and color.

"Fire" premiered in 2019 at the Opera Theatre of Saint Louis and was brought to the Met as part of a co-production that will travel to the Lyric Opera of Chicago in March and Los Angeles Opera in a future season. (The Oct. 23 matinee from the Met, the last of eight performances, will be broadcast to movie theaters around the world.)

This was Blanchard's second opera after 2013's "Champion," about boxer Emile Griffith, and the music is most colorful and moving in orchestral parts. At times, the vocal writing can seem more restrained, especially in the first act. Energy lifts at the start of the second act Baptist church with "Wash Me Clean" and his recollection of a storm from his youth.

There is allusion in the text to what seems to be the "Liebesnacht" from Wagner's "Tristan und Isolde," a duet between Charles and girlfriend Greta proclaiming "I used to hate the night. Night was my sworn enemy." And picking up on the search for sexual identity, a theme from Blow's book, Charles sings near the end "I am what I am," harking back to "La Cage aux Folles," the 1984 Tony Award winner by Jerry Herman and Harvey Fierstein.

Blanchard and Lemmons condense a largely descriptive book to key moments in Blow's memoir: growing up the youngest of five children, the assault by a cousin Chester, his baptism, brutal hazing by a Grambling fraternity and the search for love with first Evelyn and later Greta. The audience's biggest response was for the dancing fraternity brothers, who stopped the show.

Blanchard and Lemmons move the plot along by having the adult Charles (imposing baritone Will Liverman) sing alongside the young Charles, known as Char'es-Baby. Walter Russell III, a 13-year-old who played the young Charles, got the biggest individual cheers with a star-making performance that was charming, insightful and moving.

Music director Yannick Nezet-Seguin, in a colorful shirt markedly different from the attire of predecessor James Levine, and chorus master Donald Palumbo brought out a vibrant performance. Nezet-Seguin, showing a commitment to contemporary work seldom seen at the Met, is to lead Matthew Aucoin's "Eurydice" in November.

Directors James Robinson and Camille A. Brown (she also was the choreographer) blocked a breezy production with sets by Allen Moyer dominated by two large squares that shifted on and off stage.

Pfizer vaccine for U.S. kids may not be available until November

Tensions high between vaccinated and unvaccinated in Canada, poll suggests

There are new rules for employment insurance. Here's what you need to know