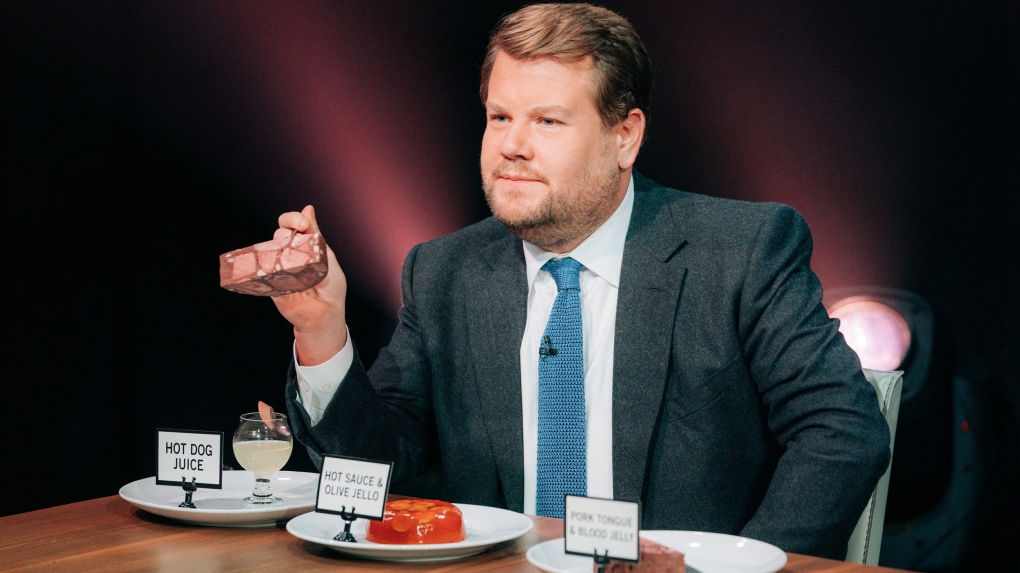 "Spill Your Guts or Fill Your Guts," a segment on "The Late Late Show with James Corden" is again being criticized for cultural insensitivity. (CBS Photo Archive/Getty Images/CNN)

Balut is a dish that Kim Saira grew up eating with her grandmother and her cousins.

So when she first saw the Filipino street food snack featured a few years ago among a slate of purportedly unappetizing dishes on "Spill Your Guts or Fill Your Guts" -- a recurring segment on "The Late Late Show with James Corden," she was a little thrown off.

"I wasn't mad about it, but I was more so confused," Saira, a 24-year-old Filipina and Chinese American activist, said. "I was just wondering why they used a food that was so sentimental to my culture."

It wasn't just balut. Other episodes featured chicken feet, used in cuisines around the world; thousand-year-old eggs, a Chinese delicacy; and bird saliva, an ingredient Saira herself has eaten in soup.

The recent rise in hate and racism against Asian Americans and Pacific Islanders, though, got Saira thinking about "The Late Late Show" segment in a different light. She started questioning why it was still socially acceptable for Corden to present dishes routinely eaten by Asian people as "disgusting."

"If you don't like it, there's a way to be respectful about it," she added. "When a person who isn't involved in the culture whatsoever is adamantly profiting from it and showing it in a negative way, it's not right."

Earlier this month, Saira started a petition calling on Corden and "The Late Late Show" to make a change. As of Thursday, it has 41,000 signatures and counting.

'SPILL YOUR GUTS' REMOVES FOODS FROM THEIR CONTEXT

"Spill Your Guts or Fill Your Guts" is essentially a more extreme version of truth or dare.

In the segment, James Corden and his celebrity guests take turns choosing between answering an uncomfortable, personal question or eating one of several "disgusting" foods.

The foods in question range from dishes specific to various cuisines (chicken feet, cow tongue and bull penis) to concoctions with no obvious cultural significance (salmon smoothies, bug trifle and hot dog juice). Several of the foods have been featured in the segment more than once.

The game is premised on shock value, with Corden and his guests (who are rarely ever Asian Americans) wrinkling their noses and referring to the dishes as "disgusting," "horrifying" or simply, "ew." The dishes are usually prepared in ways that seem intentionally unappetizing, divorced of context, flavour and seasoning.

For the purposes of the game, that's likely the point. But for Saira and other critics, the problem is that ingredients eaten by millions around the world are even included in the lineup of "gross foods."

"It perpetuates this myth that Asian people are 'disgusting' or 'horrifying,' because he's taking foods that are so unfamiliar and telling other people that they're disgusting," she said. "It does perpetuate the cycle of anti-Asian racism."

Saira's petition calls on "The Late Late Show" to either modify the segment to remove foods that are rooted in other people's cultures or to get rid of it entirely. It also demands that Corden apologize publicly and donate to Asian American organizations.

A spokesperson for CBS, which airs the talk show, referred CNN to comments Corden made on "The Howard Stern Show" last week.

"The next time we do that bit, we absolutely won't involve or use any of those foods," Corden said in the June 16 interview, when asked about the recent criticism. "As you said at the start, our show is a show about joy and light and love. We don't want to make a show to upset anybody."

Corden also noted that he didn't know when the segment would run again.

To Saira, though, the comedian's response fell short.

"In my petition, I have specifically asked for James Corden to publicly apologize on his show, and the reason why I was really specific about that was because I think that it is imperative for his hundreds of thousands of viewers to understand the harm that mocking these foods, rooted in Asian cultures, has on Asian people who still eat them," she said.

Though Saira's petition is recent, "Spill Your Guts" has been criticized as culturally insensitive for a few years now.

Andrew Sun, a food columnist for the South China Morning Post, referred to the segment in a 2018 article as "cultural chauvinism of the highest order."

"I want to know which white, European epicurean arbiter decided that fattened duck or goose liver, which sounds better using its French name, foie gras, is gourmet and luxurious, but chicken gizzard and duck tongues are uncivilised and gruesome?" he wrote.

Krishnendu Ray, an associate professor of food studies at New York University, notes that despite their popularity, East Asian cuisines have long been mocked and considered inferior in the West to northern European cuisines from France, England and Germany -- a phenomenon he describes as "a history of domination and hierarchy of taste by race, class and ethnicity."

But in today's era, those same attitudes -- including those on "Spill Your Guts" -- seem out of touch, he added.

"It sounds idiotic and out of date at a time when the balance of power is changing in the world and demographic transition is on its way in the U.S.," Ray wrote in an email to CNN.

Writer Shirley Cahyadi raised questions about who determines what is considered inedible and who "The Late Late Show" caters to in a 2018 piece for Embodied, New York University's arts and culture magazine.

"The show commands an international audience as it's aired in countries such as India, Southeast Asia, France, Ireland, New Zealand and Finland, yet it fails to effectively take non-western perspectives into account," Cahyadi wrote. "Even if this segment was not born out of racist motives, the lack of initiative to branch out of the bubble of ignorance is just not good enough."

The issue goes beyond James Corden and "The Late Late Show."

Media has often presented Asian cuisines and foods as unsavory, unappetizing or unhealthy. Take, for example, the Travel Channel show "Bizarre Foods with Andrew Zimmern," which featured its host roaming the world sampling food considered gross, exotic or bizarre. A few years ago, Zimmern acknowledged that the show's early seasons had a cultural sensitivity problem.

Though complaints about exoticism have been bubbling up for a while, this moment of heightened awareness around anti-Asian racism seems to have brought it to a boiling point, Saira said.

ASIAN AMERICANS ARE FIGHTING FOR CHANGE

On Thursday, Saira and others who take issue with "Spill Your Guts" are holding an event in Los Angeles around the corner from where "The Late Late Show" films.

It's intended to bring together Asian Americans and allies who want to change how Asian cultures are portrayed in mainstream media and raise awareness of the "Spill Your Guts" issue, Saira said. And, fittingly, it will feature a Korean food truck.

To those who may not have grown up eating foods like balut or to those who find them unappealing, "Spill Your Guts" might seem like harmless fun.

But for Saira and others who are standing with her, food is personal -- and political.

Economists concerned about Bank of Canada’s expected interest rate hike, but suspect it will be the last

The Bank of Canada is expected to announce yet another interest hike on Wednesday, and economists are hoping that it will be the last one for a while, with some warning it could be a step closer to recession as Canada tries to balance the need to fight inflation with the growing pressure on the housing market.

An organization investigating unmarked graves near a residential school in eastern Alberta says it has uncovered 'physical and documented evidence of a genocide.'

As Prime Minister Justin Trudeau gathers with his cabinet for a pre-return to Parliament retreat to plot out their priorities for 2023, a big focus of the conversation is on Canadians' cost of living concerns and how the Liberals plan to pay for their commitments while being mindful of the risk of a recession. Here's what's being said at the federal retreat.

Four 13-year-old boys have been charged in connection with a "swarming" attack on board a TTC bus in Scarborough.

U.S. and Canada not interested in sending armed force to Haiti

The United States and Canada showed no interest Tuesday in deploying security personnel despite renewed appeals from the United Nations and Haiti for help to end worsening violence in the Western hemisphere's poorest nation.

Brothers killed by avalanche while heli-skiing in southeastern B.C.

The two men killed by an avalanche while heli-skiing near Revelstoke, B.C., on Monday have been identified as brothers and business leaders from Pennsylvania.

Five Canadian cities among most overrated in the world: report

Five Canadian cities are among most overrated cities for tourists to visit in the world, according to a new report.