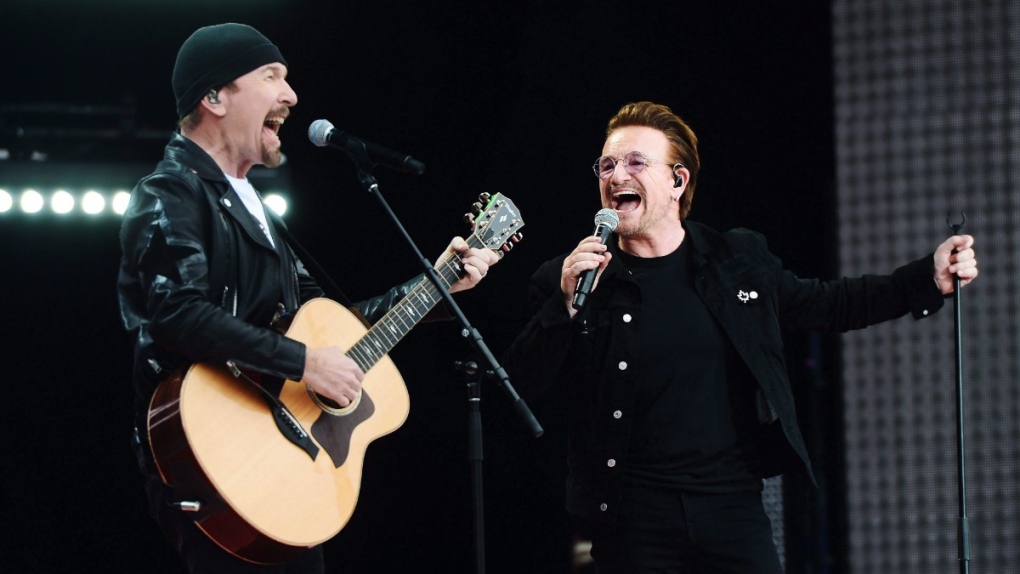 U2's The Edge and Bono perform during Canada 150 celebrations on Parliament Hill in Ottawa on July 1, 2017. (Sean Kilpatrick / THE CANADIAN PRESS)

U2 may be one of the biggest rock bands on the planet, but its lead singer Bono is harbouring some grievances around the group's name and the songs he's written and performed throughout their 46 years together.

In an interview with The Hollywood Reporter's "Awards Chatter" podcast, alongside U2's lead guitarist The Edge, the Irish singer reflected on the genesis of the band and revealed that he has never liked their name -- despite its instantly recognizable nature.

When The Edge revealed that he and Bono didn't warm to U2 as a name at first, his bandmate chimed in to say: "I still don't. I really don't. I was late into some kind of dyslexia -- I didn't realize that The Beatles was a bad pun either."

Bono told "Awards Chatter" that "in our head, it was like the spy plane, it was... a U-boat, it was futuristic. But then, as it turned out to imply this kind of acquiescence, no, I don't like that name. I still don't really like the name."

He claimed it was their first manager, Paul McGuinness, who said it was a great name which would look good on a T-shirt, convincing the group to stick with U2.

Of U2's early works, such as the album "Boy," Bono said the band sounds incredible, but he struggles to listen to the songs because he finds his own voice "very strained" and "not macho" -- which he said was damaging for what he called his own "Irish macho."

"I've been in a car when one of our songs has come on the radio and I've been the colour of... scarlet. I'm just so embarrassed. I do think U2 pushes out the boat on embarrassment quite a lot," Bono said.

Bono revealed that he wasn't the only one critical of his voice.

He recounted a tale in which the late singer Robert Palmer -- perhaps best known for the hit "Addicted to Love" -- said to U2 bassist Adam Clayton in the 1980s: "God, would you ever tell your singer to just take down the keys a little bit? He'd do himself a favour, his voice a favour, and he'd do us all a favour who have to listen to him."

Bono added that he feels like he "only became a singer recently" and that "maybe it hasn't happened yet for some people's ears."

Considering U2 are one of the most successful and most popular bands in the world, there are bound to be plenty of fans who won't agree with Bono's verdict on his voice or the group's famous name -- but at least they can listen to his songs more than the creator himself can.