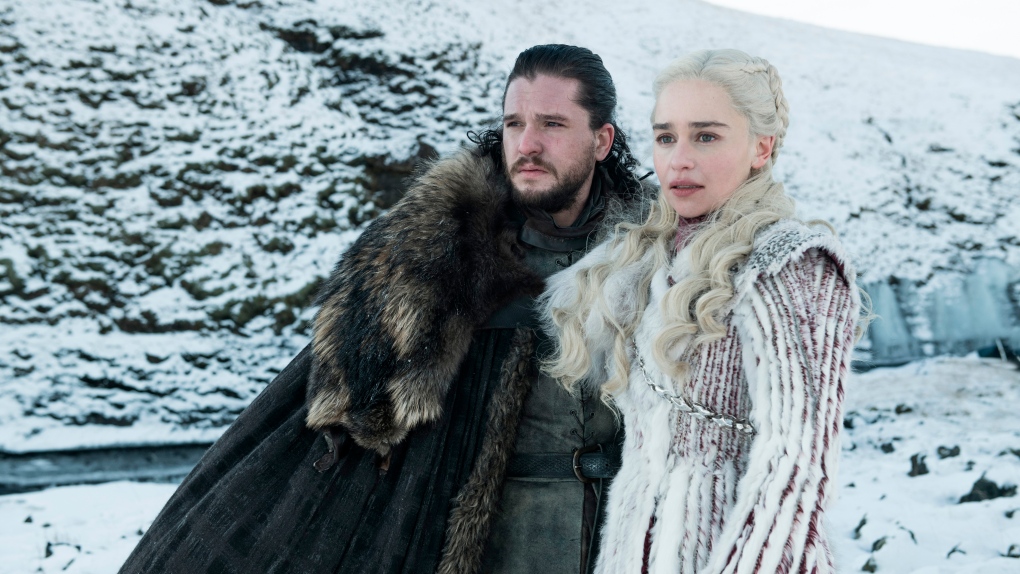 This photo released by HBO shows Kit Harington as Jon Snow, left, and Emilia Clarke as Daenerys Targaryen in a scene from "Game of Thrones," which premiered its eighth season on Sunday. (HBO via AP)

Over the past year, Hollywood TV and movie studios have been suing “hundreds of everyday” Canadians for allegedly sharing and downloading copyrighted material, an Atlantic-based law firm says in a press release.

“A torrent of lawsuits are descending on Canadians accused of online file sharing. If you get one of these, it can't be ignored,” privacy lawyer and partner at McInnes Cooper David T.S. Fraser said in a tweet on Monday.

He stressed this wasn’t a hoax and that people receiving a piece of registered mail from a Hollywood studio were actually being sued for copyright infringement.

Ignoring it won’t make it go away, he said, warning that people who do could pay a high price.

The lawsuits are civil cases rather than criminal ones and Fraser’s law firm stated accused Canadians should “act quickly or risk a judgement and monetary award against you.”

The notices state accused people only have 30 days to file a statement of claim in their defence. If they don’t, studios can demand that Canada’s Federal Court grant a default judgment against the users -- which studios can then use to collect damages.

This could come in the form of a lien on a person’s property or even through the studio garnishing a person’s wages, depending on the province.


HOW WERE THE ACCUSED IDENTIFIED?

Since last summer, at least, Hollywood studios have been filing “reverse class actions,” which essentially consolidate multiple lawsuits into one.

The class actions are primarily targeting alleged users of BitTorrent sites -- which allow users to download TV shows and videos in segments from multiple sources.

But doing that exposes users’ IP addresses to whoever wants to seek them out, including Hollywood studios. Because a studio initially only has a user’s IP addresses and no actual names, these lawsuits address the defendants as “John Doe.”

However, the studios can use the IP addresses to file a Norwich Order through Federal Court that can then force internet providers to disclose a customer’s name and mailing address.


STUDIOS LIKELY SUED TO DETER OTHERS

But Patrick Kerr, one of the firm’s lawyers who has defended Canadians, says the extent of people’s liability and damages depends on a number of factors.

These can include whether a user made any money off the downloads, the number of times something was downloaded, the hardship the damages could do to the defendants and whether a studio wants to send a big deterrent message about a particular copyright.

He said, in some cases, there might be no financial compensation -- if there wasn’t enough evidence for people to be found liable of copyright infringement.

Kerr explained that the reason studios were likely going after alleged downloaders is two-fold: Money and deterrence.

“I think there’s a chance with these new lawsuits [that] people will become aware of the fact that they can be tracked sufficiently well, identified and that that might deter people from illegally downloading stuff in the future,” he told CTVNews.ca over the phone.

Despite the advent of Crave, Netflix and other legal streaming sites, there is still rampant illegal downloading of copyrighted material across the world, including in Canada.

In fact, Fortune estimates that HBO’s 'Game of Thrones' season premiere on Sunday was illegally viewed 90 million times in 72 hours.

Kerr said that while in the past, studios have been trying to combat illegal downloaders by sending notices to their internet providers, there “wasn’t any teeth to it.”

“But this is a legal proceeding that’s been started and there are consequences if they ignore it,” he said.

According to McInnes Cooper, some of the 16 production studios filing these lawsuits include WWE Studio Finance Corp, Dallas Buyers Club, LLC and Morgan Creek Productions, Inc. which has produced “The Last of the Mohicans” and “Ace Ventura: Pet Detective.”

A #torrent of lawsuits are descending on Canadians accused of online file sharing. If you get one of these, it can't be ignored. You're actually being sued for #copyright infringement. More info here: https://t.co/RmqKvAA0cV