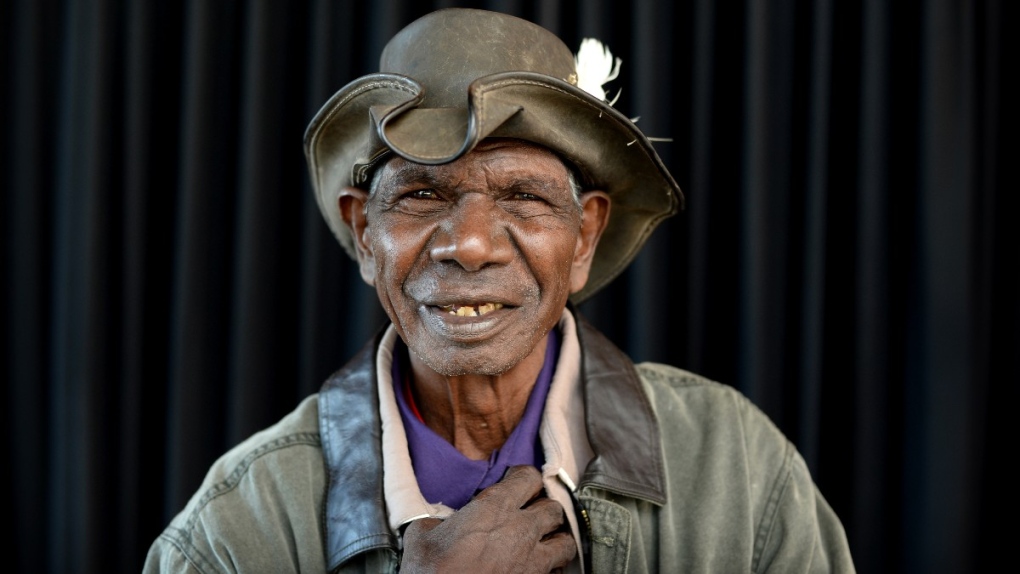 Australian Indigenous actor David Gulpilil poses for a photograph at The Sydney Opera House, on May 27, 2013. (Dan Himbrechts / AAP Image via AP)

Gulpilil found his widest audiences with his roles in the 1986 hit film "Crocodile Dundee" and in director Baz Luhrmann's 2008 epic "Australia" in a career that spanned five decades. He was often described as a bridge between Indigenous Australia and the outside world who never fit comfortably in either place.

"It is with deep sadness that I share with the people of South Australia the passing of an iconic, once-in-a-generation artist who shaped the history of Australian film and Aboriginal representation on screen," South Australia state Premier Steven Marshall said.

An accomplished didgeridoo player, Gulpilil mixed with Jimi Hendrix and Bob Marley. He was feted in New York and Paris. He also spent periods of his life as an itinerant drinking and sleeping in parks in the northern Australian city of Darwin and stints in prison for alcohol-fuelled offences.

Gulpilil was born on tribal land in the sparsely populated wilds of the Australian northern frontier in the early 1950s, his friend and caregiver Mary Hood said. His date of birth was recorded as July 1, 1953, a guesswork date set by local missionaries.

First contacts between Indigenous Australians and the outside world were becoming rare but continued in the remote Outback for another 30 years from the time of Gulpilil's birth. Family groups followed in nomadic traditions unaware their land had been colonized by Britain two centuries earlier.

Gulpilil said he never saw a European Australian until he was 8 years old and considered English his sixth language, his biographer Derek Rielly wrote. The other 13 were Indigenous dialects. Gulpilil's Christian name was foisted upon him at school.

Gulpilil was a 16-year-old ceremonial dancer performing in the Indigenous mission of Maningrida in 1969 when he met British director Nicolas Roeg, who was scouting for filming locations. Gulpilil starred in Roeg's acclaimed 1971 movie "Walkabout" as a lone youth wandering the Outback as part of a tribal rite of passage, who comes across and rescues two lost British children. The British siblings were played by a teenage Jenny Agutter, who later found fame in Hollywood, and the director's 7-year-old son, Lucien.

His final role was the remake of "Storm Boy" in 2019, in which he played the father of the central character in the original, Fingerbone Bill.

Gulpilil recalled learning to binge on alcohol and drugs from counter-culture icon Dennis Hopper, who played the starring role in the 1976 movie about a nineteenth-century Australian outlaw, "Mad Dog Morgan." The 22-year-old Indigenous actor had third billing on the film after Hopper and Jack Thompson, a stalwart in Australian cinema.

Gulpilil won multiple best-actor awards for the 2002 Rolf de Herr-directed movie "The Tracker," in which he played one of the many Indigenous men that Australian police routinely used as trackers of fugitives in the Outback.

Weeks before the movie was released, journalists visited him in the small Indigenous community of Ramingining on his crocodile-infested tropical tribal land. He was living in a hut with his then-partner, Indigenous painter Robyn Djunginy, without power or running water.

They cooked kangaroo meat and fish over an open fire beneath a scrap iron roof. Hunting spears were slung from a rafter and Gulpilil kept a wooden Indigenous fighting club known as a nulla nulla for self-protection.

"I was brought up in a tin shed. I wandered all over the world -- Paris, New York -- now I'm back in a tin shed," Gulpilil said.

He presented himself as a victim of his own celebrity and his own people's misunderstanding of his position in the wider world.

"People say to me: You're a big name. You have money. Why don't you buy yourself a house; get out of Ramingining?" he said.

"This is my country. I belong here, and I'm broke," he added.

Exactly why he was broke was not clear. He was vague about how much he earned over the years, and wealth in Australian Indigenous society is communal, tending to permeate through relatives and friends.

Back then, Gulpilil liked to drink beer, smoke marijuana and take kava. But because all three were banned in Ramingining, he avoided some of the temptations of city life excesses.

Gulpilil's friend and caregiver, Hood, first met him in 2006 at the Darwin premiere of "Ten Canoes," the first feature-length movie in an Australian Indigenous language.

Gulpilil narrated the movie and his son, Jamie Gulpilil, was part of the cast that was mostly drawn from Ramingining.

"When I first met him, I saw a real kindness," Hood said. She acknowledged there was also a "dark" side.

A Darwin judge sentenced Gulpilil in 2011 to a year in prison for breaking the arm of his then-partner, indigenous artist Miriam Ashley, during a drunken argument in a Darwin home. He used his time in prison to turn his life away from alcohol and cannabis.

Hood regularly visited Gulpilil in prison. He was released to live with her and, for a time, Ashley at Hood's Darwin home while on parole. He eventually followed Hood to Murray Bridge in South Australia state, 3,500 kilometres (2,200 miles) from Ramingining and his traditional country.

Hood became his caregiver after he was diagnosed with inoperable lung cancer in 2017.

He is survived by his sisters Mary and Evonne, daughters Makia and Phoebe, and sons Jamie and Jida. Director Peter Weir said during an interview in New York in 1977 while promoting his supernatural thriller "The Last Wave" that Gulpilil had created untold personal tensions by straddling two disparate cultures.

"He's enigmatic. He's an actor, a dancer, a musician. He's a tribal man, initiated in the tribal ways," Weir said. "He has a foot in both cultures. It's an enormous strain on the man."