Alice Munro wins Nobel Prize in literature: 'A master of the short story'

The Swedish Academy announced the decision Thursday, calling the 82-year-old author from Wingham, Ont., a "master of the contemporary short story."

She is the first Canadian and the 13th woman to win the award. Saul Bellow, who was born in Quebec, won in 1973 as a naturalized U.S. citizen who identified as American.

Reacting to news of her win Thursday morning, Munro told CP24 that the entire experience has been "wild."

Though odds makers gave her a one in two chance of winning the approximately $1.3 million prize as late as Wednesday, Munro said she didn't think she'd win.

"I didn't think about it at all," she said from Victoria, B.C. "I would have said if you had asked me that then, my chances are pretty slight."

She added that the coveted prize is on another level. "It's such a worldwide, important thing… I don't think along this line usually.

"I don't reflect on my own career. I just go on and I'm always in the present pretty much."

She said it was her "rather delighted" daughters who broke the news to her early Thursday morning. "I don't even remember, it's just been so wild."

Munro's publisher Doug Gibson told CTV's Canada AM that the decorated author, who won the Man Booker International Prize in 2009, is adored by fans worldwide for her short stories about "ordinary Canadian people."

"Here we have a world prize being won by someone who writes about housewives in Vancouver, booksellers in Victoria, bean farmers in Huron County and accountants and teachers and librarians --ordinary Canadian people, and she turns it into magic," he said.

Gibson said that when he first started working with Munro in 1976, she was under "terrible pressure" to "get serious" and write a novel.

"I said 'Alice, they're all wrong. You're a short story writer… you're a sprinter, not a marathon runner, so keep writing short stories,'" he said, adding that he offered to continue publishing any of her short story collections.

He said that all Canadians should be feeling proud by the win. "It's a great day for all of us, every Canadian should be walking a little taller."

"Canadians are enormously proud of this remarkable accomplishment, which is the culmination of a lifetime of brilliant writing," he said.

"Ms. Munro is a giant in Canadian literature and this Nobel Prize further solidifies Canada’s place among the ranks of countries with the best writers in the world."

"Her selection as a Nobel Laureate is a tribute to her profound talent and devastating insight. I am thrilled for her and all the lucky readers around the globe who will discover her as a result of this honour," Wynne said.

Munro's bestselling collection of stories include "Dance of the Happy Shades," "Who Do You Think You Are?," "Friend of My Youth," "Hateship, Friendship, Courtship, Loveship, Marriage," "Too Much Happiness, and most recently "Dear Life."

Munro has also won the praise and admiration of her colleagues, with short story writer Cynthia Ozick calling her "our Chekhov," and novelist Jonathan Franzen noting her ability to provide the reader with "intensely pleasurable private experiences."

She now joins the list of Nobel laureates in literature that includes George Bernard Shaw, Ernest Hemingway, T.S. Eliot, Toni Morrison and just one other writer with a Canadian connection: 1976 winner Saul Bellow, who was born in Canada and raised in America. Last year's award went to Chinese writer Mo Yan.

Munro’s latest accolade comes after a long career that she has indicated is nearing its end. In an interview with The National Post last summer, the writer said she probably was "not going to write anymore."

However, following her win, Munro told the Swedish Academy that she may now reconsider.

"This might change my mind," she said in an interview.

Here is the full interview with Alice Munro: 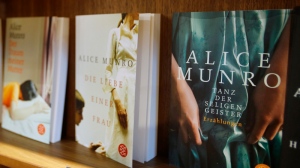 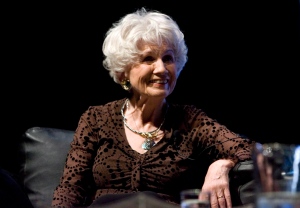 5 books that paved the author's path to global recognition