A recent survey of Canadians and Germans shows both groups hold largely favourable views of NATO, at a time when more countries are looking to join the military alliance amid Russian President Vladimir Putin's war in Ukraine.

The survey, done in partnership between Nanos Research and its sister organization Dimap in Germany, asked more than 1,000 Canadians and 1,000 Germans their views on the North Atlantic Treaty Organization. Both Canada and Germany are members of NATO.

By comparison, 68 per cent of Germans were favourable, with 18 per cent very much so and 50 per cent somewhat so.

When also asked about their views on partnerships with other countries, a large majority of Canadians saw Germany in a positive light at 80 per cent, including 46 per cent who hold a positive view of the country and 34 per cent who are somewhat positive.

Nanos is also the volunteer chair of Atlantik-Bruecke Canada, which describes itself as a not-for-profit, non-partisan organization dedicated to developing positive relations between Canada and Germany, in partnership with Atlantik-Brucke in Germany.

Along with a number of economic sanctions against Russia, NATO's member countries also have individually supplied equipment and military arms to Ukraine.

Just this week, Canada announced it would send another 20,000 rounds of artillery ammunition to Ukraine at a cost of $98 million.

The ammunition is being sourced from the United States, with the funding coming from the $500 million set aside in the 2022 federal budget.

Canada also is providing another $1 million to help international investigations into sex crimes committed by Russian troops in Ukraine. 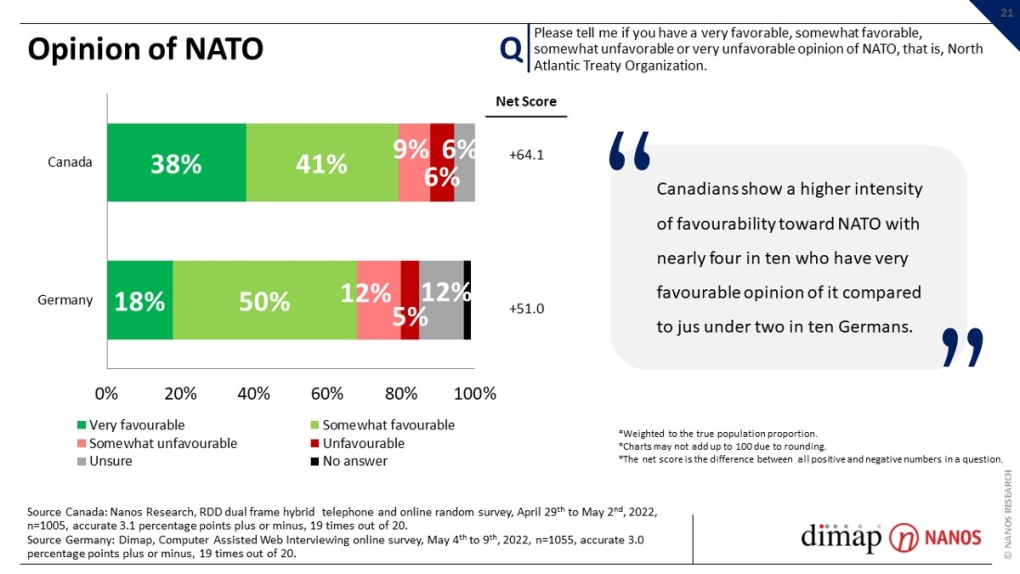 Nanos and Dimap also asked Canadians and Germans which countries they would be comfortable with as energy partners.

This comes as several European countries, including Germany, look to wean themselves off Russian oil. A recent study found Germany was the biggest buyer of Russian energy during the first two months of the war in Ukraine.

The Nanos-Dimap survey found Canadians are largely comfortable with Germany as an energy partner at 61 per cent of those surveyed.

Canadians were similarly comfortable with Australia and the United States as energy partners at 63 and 61 per cent, respectively.

Germans also viewed Canada favourably as an energy partner at 64 per cent.

In contrast, only eight per cent of Canadians are comfortable with Middle Eastern countries such as Qatar and Saudi Arabia as energy partners, with an even smaller proportion at ease with the idea of energy partnerships with China or Russia.

"So the fact that the U.S. is part of the mix not a big surprise because we're already significant energy partners," Nanos said.

"But Germany is seen as being just as appealing as the United States or Australia, and it speaks to the opportunity for, kind of, more dialog and relations between Canada and Germany."

The Canadian results are based on telephone and online random surveys of 1,005 people between April 29 and May 2. The results are accurate within 3.1 percentage points, 19 times out of 20.

The German results are based on online surveys of 1,055 people from May 4 to 9 and are accurate within three percentage points, 19 times out of 20.

With files from CTVNews.ca Online Politics Producer Rachel Aiello, The Canadian Press and The Associated Press

The Conservative Party of Canada's leadership election organizing committee says it has disqualified candidate Patrick Brown from the race. Election committee chair Ian Brodie says in a statement the party became aware of 'serious allegations of wrongdoing' by Brown's campaign that appear to violate financing rules in the Canada Elections Act.

As the pandemic keeps people indoors, children and youth are turning to video games at an alarming rate. Sometimes with grave consequences. W5 investigates how much is too much?