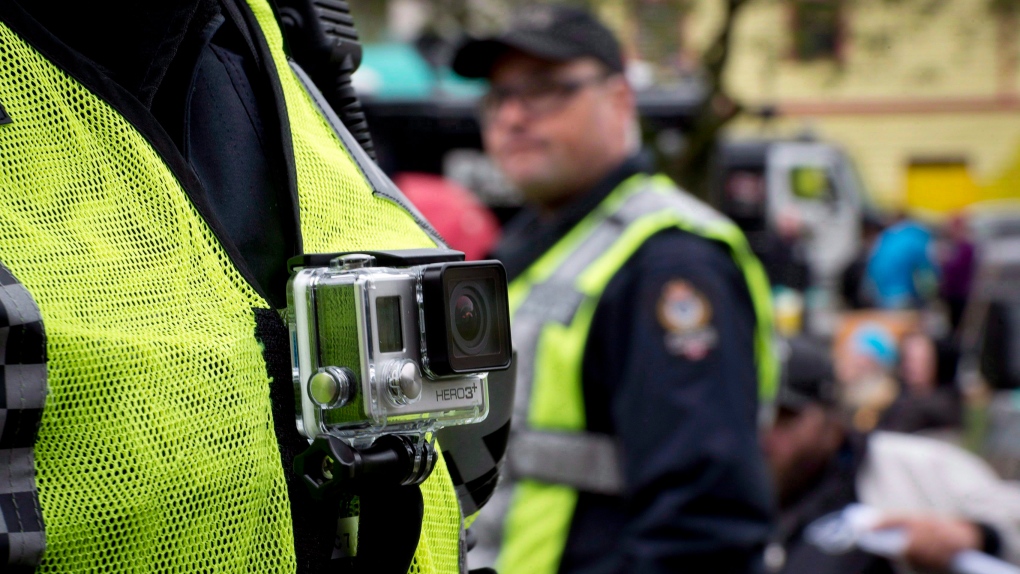 A member of the Vancouver Police Department wears a chest mounted camera as he oversees the take down of a tent city in downtown Vancouver on Oct. 16, 2014. (THE CANADIAN PRESS / Jonathan Hayward)

IQALUIT -- A pilot project in which Mounties in Nunavut's capital wore small black recording devices on their chests has wrapped up even as concerns remain about whether wearing body cameras does anything to increase police accountability and trust.

The trial run rolled out in phases starting late last fall, increasing the number of Iqaluit officers wearing cameras, until all 53 were equipped in February.

Over the last six months, the RCMP received about 5,000 calls for service and 3,500 videos were captured. Ninety-one were redacted for court purposes. Three complaints were made against the force.

The RCMP also put out an online survey asking for the public's feedback on the cameras. The results showed that most agreed or strongly agreed the cameras increased their trust in police, but only 23 people responded.

Amanda Jones, chief superintendent of the Nunavut RCMP, said despite some adjustments in the beginning, she considers the program a success.

"It went very well. We had a robust training program from the start with all officers getting four hours of training on the cameras," Jones said.

David Qamaniq, who represents Pond Inlet in Nunavut's legislative assembly, has called for body-worn cameras in Nunavut since he was first elected in 2019. His son, Kunuk, 20, was shot and killed by RCMP in 2017.

"Ever since Nunavut was created, there have been similar situations to what happened to my son. We need transparency and accountability," Qamaniq said.

He wanted the pilot project to take place in all three regions of Nunavut rather than just in Iqaluit.

"There is systemic racism going on in Nunavut. I thought that with body-worn cameras, this wouldn't stop, but at least the officers would think twice about doing something criminal."

Stephanie Boydell, acting chief executive officer of Nunavut Legal Aid, said the project's phased approach made it difficult to evaluate because there were only about three months where all officers were wearing cameras.

Boydell said Legal Aid handled cases where a camera was only turned on after an arrest. She also said that a camera only points in one direction, so it doesn't capture everything.

"I don't think it holds them accountable in the same way until we see a more broad and strict approach to when those cameras get turned on," she said. "We're still very much at the mercy of the officer turning on that camera."

Legal Aid wants to see the project expanded across the territory, she said.

Kevin Walby, an associate professor with the University of Winnipeg's criminal justice department, said body-worn cameras do not increase police transparency or accountability.

"There's no guarantee that even if there is an image that is damning of police that police will release it," Walby said.

The cameras also come with a heavy price tag, including storage capacity costs and pay for administrative staff to redact footage. Walby believes that money could be better spent elsewhere.

"I'm saddened by the fact that police and policy-makers have bought into the rhetoric of the companies that sell these cameras instead of actually listening to Canadians who are saying we want to address conflict and transgressions in a different way."

The RCMP has said it will start wearing body cameras in detachments across the country next year. Walby said that decision defeats the purpose of the Nunavut test run that was supposed to help inform that decision.

"They're rolling these things out under the guise of a pilot to do a study when, in fact, they've already decided without any good evidence that this is what we want to do."

This report by The Canadian Press was first published June 20, 2021.