How to protect yourself from a 'porch pirate'

TORONTO -- A growing trend around the holiday season can be troubling for those buying gifts online: porch pirates.

Porch pirates are thieves who steal packages that are left on someone’s doorstep when they’re not home to accept the parcel.

While there are no Canada-wide statistics on such thefts, a report from InsuranceQuotes indicates 25.9 million Americans had a holiday parcel lifted from their doorstep in 2017, up more than 10 per cent from two years prior.

Despite the lack of data, porch pirates are also a problem in Canada. Just ask Hayley Ezra and Jamie Frost, who had a package lifted from the doorstep of their Calgary home last week.

"It's just still such a violating feeling to have somebody walk straight up and just help themselves to your things like they just have a right to,” Ezra told CTV Calgary.

The couple’s security camera caught the delivery driver arriving at their house on Wednesday afternoon. Within moments, a stranger had grabbed the parcel. They later found the packaging in the backyard, but the contents were gone.

The good news is there are plenty of low- and high-tech ways to prevent porch piracy. For example, Ezra and Frost are now planning to install additional security cameras around their home and add a lockbox for deliveries.

Const. Allyson Douglas-Cook with the Toronto Police Service recently spoke with CTVNews.ca about the possible ways to mitigate your risk of porch piracy.

“No one wants to lose a present, or a gift, that’s been sent to them or that they’re sending to someone else,” she said.

Here are some ways to protect yourself from porch piracy:

Video doorbells are part of a growing trend in home surveillance and can be an effective way to protect your delivery from a porch pirate.

Amazon’s Ring and Google’s Nest offer video doorbell services that allow you to watch someone at your door live from a remote location.

There are several video doorbell products on the market and they can range in price from $100 to $500.

Douglas-Cook says any type of home video surveillance can help protect your deliveries from porch pirates.

“Security cameras are always a deterrent,” she said. “Once there’s surveillance and there’s a possibility that they are being recorded, it tends to deter that kind of behaviour, so that’s something that we suggest.”

However, Richmond RCMP Cpl. Dennis Hwang disputed the effectiveness of these surveillance cameras earlier this year. He told CTV Vancouver while the cameras can be effective in locating the alleged thief, further protection is necessary.

Amazon also offers a product called the Amazon Key, a smart lock that allows the user to remotely lock or unlock their home. For Amazon deliveries, the driver can request entry to the home through an app, the homeowner can then allow access and is sent a notification with an attached video once the driver leaves. 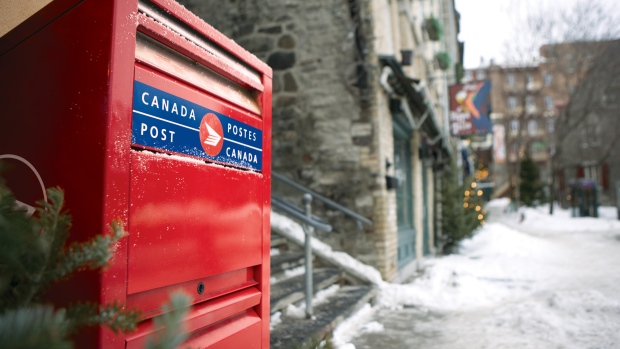 A Canada Post mailbox is seen in this undated photo.

Canada Post offers what’s known as “flex delivery,” where a parcel will be dropped off at a post office of the customer’s choice, instead of their front door. Customers can also sign up for signature delivery, where someone must sign for a parcel.

Douglas-Cook says changing your shipping address to where you work, customizing the delivery to have it sent at a specific time, or requesting for the package to be placed in a hiding spot are options some delivery companies offer to limit the risk of a package being stolen.

Some products attach to your door and help protect your package from theft. One of these is the Package Panther, which is essentially a large bag that delivery drivers can place the package inside and lock.

There are several other options on the market, but the DropSak costs approximately $89.95 and ships to Canada through Amazon.

Porch piracy prevention company Package Guard offers a unique option to protect a parcel with a Frisbee-sized disc that works as a weighted alarm.

The product costs US$89.99 and ships to Canada.

Douglas-Cook is encouraging any porch pirate victims to report the incident to police, regardless of the package’s value. This information allows officers to determine any trends or problem areas.