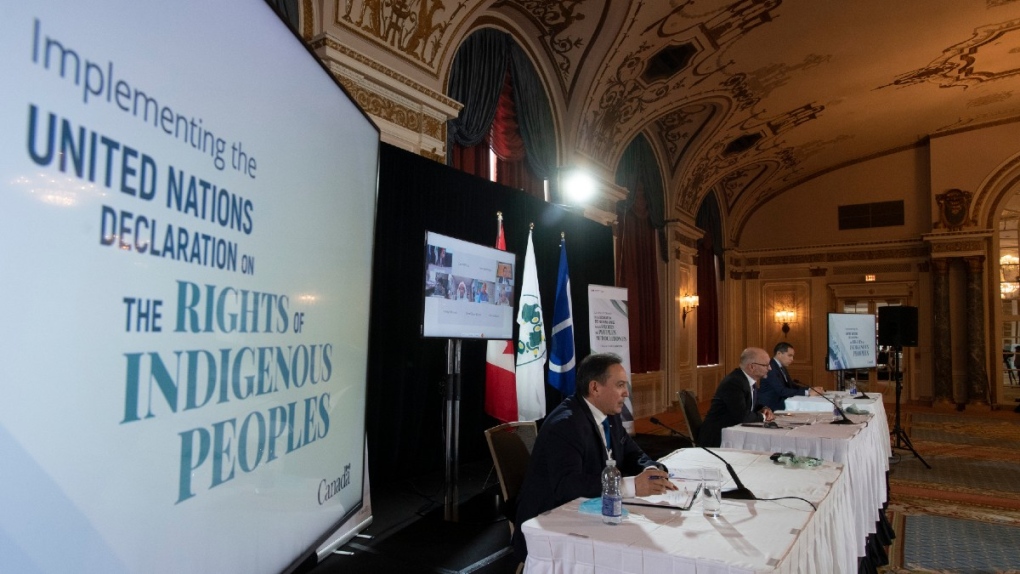 Assembly of First Nations Chief Perry Bellegarde, left to right, Justice Minister David Lametti and President of the Inuit Tapiriit Kanatami Natan Obed participate in an announcement about the United Nations Declaration on the Rights of Indigenous Peoples, in Ottawa, on Dec. 3, 2020. (Adrian Wyld / THE CANADIAN PRESS)
OTTAWA -

When European explorers first set foot on the lands that are now Canada, they claimed the territory as their own, despite the presence of Indigenous Peoples who had already been occupying the lands for generations.

They did this using the "doctrine of discovery," a policy originally emanating from decrees issued by the pope in the 15th century authorizing Christian explorers to claim so-called "terra nullius," or vacant lands, based on the notion they had racial and religious superiority.

This doctrine has since been repudiated by many official bodies, including many faith organizations.

This language is found in Bill C-15, which passed in the Senate earlier this week. The law aims to harmonize Canada's laws with the United Nations Declaration on the Rights of Indigenous Peoples.

But the addition of this potent rejection in the soon-to-be proclaimed law was not initially part of the legislation when first tabled in Parliament in late 2020.

Justice Minister David Lametti, who spent 20 years teaching property law before entering politics, says he spent years "preaching" to his students about how these doctrines were "colonialist and destructive."

"So it was really a real personal pleasure for me, when Indigenous leadership suggested it, we said, 'Oh yeah, we'd love to do that,"' Lametti told The Canadian Press in a recent interview.

"It is important that we inject that into the narrative that these doctrines have no force whatsoever, no explanatory force, no legal force and no moral force, quite frankly, quite the opposite and they need to be explicitly rejected."

"This is a very historic moment today," Bellegarde said during the ceremony.

He stressed the importance of the UN declaration in recognizing the inherent and treaty rights of First Nations in Canada and that the government's adoption of it into law is a noteworthy milestone.

"This bill is a powerful tool for building a better relationship with Canada in which those rights, our rights, must be respected and upheld and implemented. And it is part of our road map to reconciliation in this country," Bellegarde said.

The inclusion of a strong repudiation of the doctrines of discovery and terra nullius were important to include and specifically delineate in the legislation because it was those doctrines that the European settlers used to try to eliminate Indigenous rights and subjugate First Peoples, he explained.

Those colonialist ideologies are what eventually led to the creation of the residential school system, disputes about land claims and resource development rights and ongoing systemic racism within many of Canada's institutions.

"Those two doctrines are fast becoming, not only in Canada but globally, (seen) as illegal and racist doctrines. So to have them mentioned in there is very powerful. It's about decolonizing Canada's laws and policies," Bellegarde said.

"It will have a huge impact. It's always about peaceful coexistence and mutual respect and sharing this great this great land and sharing these resources. We've never surrendered or given up anything, and that's fundamental to this going forward."

Another addition to the bill that came after it was tabled in Parliament was a strengthening of language that recognizes the protection of Aboriginal treaty rights under the Canadian Constitution. Wording was added to say that "Canadian courts have stated that such rights are not frozen and are capable of evolution and growth."

Chief Wilton Littlechild, who was part of a team of human rights and legal experts who took part in a 1977 Indigenous delegation to the United Nations that helped to push for and later draft the 2007 declaration, was instrumental in getting these passages into the legislation's preamble.

He says it was of utmost importance for him personally to see this enshrined in Canada's UNDRIP law because fighting for recognition and respect of Canada's treaties with First Nations was the reason his people in Maskwacis, Alberta tasked him with going to the global community, seeking an international declaration of their rights over 40 years ago.

"It was treaty violations in August 1977 and their concerns about the daily violations of our treaties that they wanted me to go back to the international arena to remind the world," Littlechild said.

"So treaties, or violations of our sacred agreements, is why I went there and we proposed solutions, one of which is the very legislation we're talking about today."

'The noise was deafening': Snowbirds, Canadian travellers describe what Hurricane Ian was like

As Hurricane Ian rips through Florida, the immense destruction is also being felt by Canadian property owners, also known as snowbirds. For those who rode out the storm, it may be a long wait until they can book a flight home.

Team-based care is more efficient and benefits both patients and surgeons, so it should be widely adopted across surgical specialties, some surgeons say.

Climate change added at least 10 per cent more rain to Hurricane Ian, a study prepared immediately after the storm shows.

Convicted bombmaker escaped U.S. prison without his absence being noted for 4 days

Authorities say they are investigating how a convicted bombmaker was able to easily escape from a Nevada prison without anyone noticing for four days, before a tip led to his capture at a transit centre in Las Vegas Wednesday night as he prepared to board a bus out of town.

Why home insurance will get more expensive for all of us and unaffordable for some, according to experts