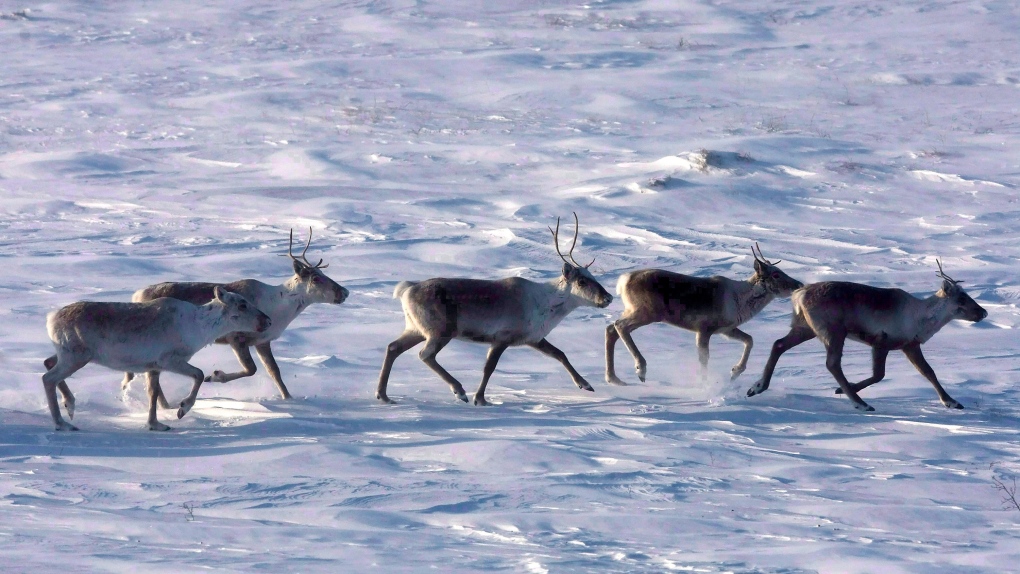 Wild caribou roam the tundra in Nunavut on March 25, 2009. THE CANADIAN PRESS/Nathan Denette

Newly published research argues Indigenous hunting didn't cause the collapse of once-mighty caribou herds in Canada's North and harvest bans only force First Nations to shoulder the blame for problems they didn't create.

The paper in Science Advances concludes the more likely cause for the disastrous declines is the cumulative effects of mineral exploration.

"The scapegoat is the Indigenous person who depends on caribou for subsistence," says the paper's author Brenda Parlee, a biologist at the University of Alberta. "It's easier to point the finger at somebody with a gun than it is to look at the more complicated problem of habitat disturbance."

A biologist with the Northwest Territories says restrictions on a crucial northern food are necessary to prevent the Bathurst caribou from disappearing. Jan Adamczewski said some quotas were requested by First Nations governments.

The Bathurst herd ranges over a vast region of the central Arctic -- from Great Slave Lake to the Nunavut coastline. Nearly half a million strong in the mid-1980s, it has fallen to 20,000 today.

In response, the N.W.T. and some Indigenous co-management boards banned non-Indigenous hunting in 2010. All harvesting was suspended in 2014 -- a heavy blow for Dene communities where store-bought food is expensive and caribou was on the dinner table several times weekly.

But territorial biologists argue uncontrolled hunts using high-powered rifles, snowmobiles and GPS were, at the very least, preventing the herd from recovering. They have estimated Indigenous hunters were taking between 4,000 and 6,000 caribou, mostly cows, every year.

Parlee says those numbers are speculative.

Using figures for 1985-2000, she found harvests closely tracked population levels of the four major herds. When caribou were abundant, people ate more. When they weren't, other resources were used.

The figures showed that even when some herds began to rebound, hunting pressure was moderate. For every increase of 10,000 animals, consumption increased half a caribou per person.

"There's been a lot of conjecture about how people must be over-hunting, but the data shows the absolute opposite," says Parlee. "The amount of caribou being harvested today is a fraction of what it would have been 20, 30 years ago.

"We're distracting people from what is a more central or problematic issue."

That issue, Parlee says, is habitat disturbance, mostly from mineral exploration. She and her co-authors found spikes in mineral staking in the 1990s and 2000s corresponded with falling caribou numbers.

Noise, dust, roads and seismic lines from exploration camps all linger and add up, she says.

"You have a very fragmented landscape as a result of exploration. Elders say it can be over 100 years before caribou habitat recovers."

Instead of restricting a vital food that lies at the heart of Dene culture, the territory should focus on land-use planning to protect caribou ranges, Parlee suggests.

Adamczewski is aware some Indigenous communities in the N.W.T. feel they're being made scapegoats. And he doesn't argue that habitat and climate change -- which dries out the range and alters the delicate timing of northern life cycles -- play important roles in the herd's collapse.

But hunting has to be restricted to give the herds a chance, he says.

"We're pretty certain that the harvest was a significant contributor to the decline."

Adamczewski says a draft plan is being considered that would protect calving grounds and shut down "non-essential" activities when caribou are nearby. That plan should be ready later this year.

"It may be too little, too late," says Parlee. "We're seeing the legacy of bad decision-making back in the '90s."