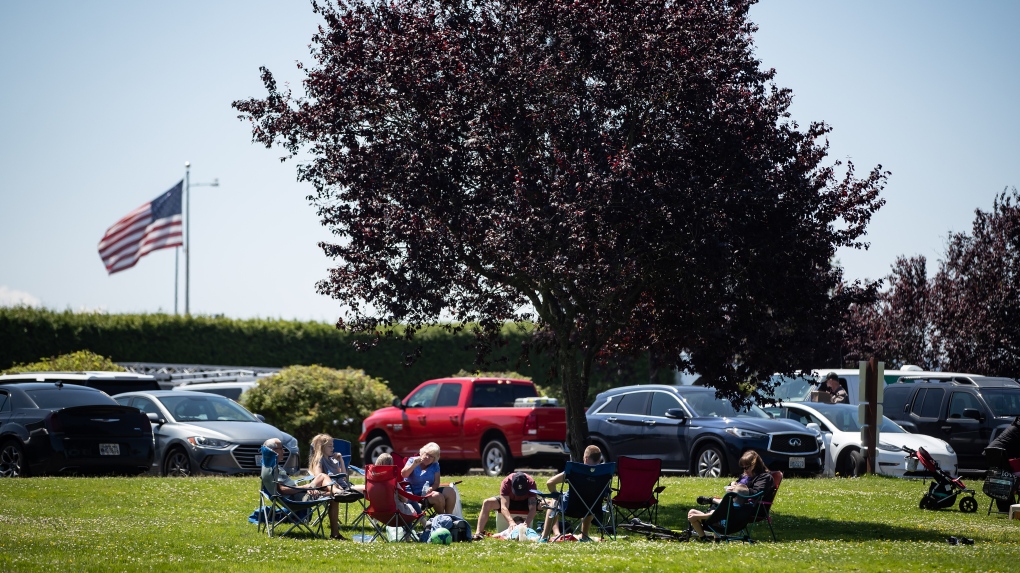 People sit together at Peace Arch Historical State Park in Blaine, Wash., across the Canada-U.S. border from Surrey, B.C., on Sunday, July 5, 2020. THE CANADIAN PRESS/Darryl Dyck

TORONTO -- Canadians are increasingly concerned about contracting COVID-19, despite the steady decline in confirmed cases across Canada in recent weeks, according to a new survey.

The survey, conducted by Leger for the Association for Canadian Studies between July 3 and 5, found that 58 per cent of Canadians are personally afraid of contracting COVID-19.

That percentage has been increasing in the past two weeks, according to Leger’s weekly surveys which show it has gone up by seven percentage points since June 22. Before then, the polling data shows Canadians’ concerns about personally contracting the disease had not been that high since April 20.

Canadians appeared to be most anxious about the virus in early April, when 64 per cent of respondents reported they were personally afraid of contracting COVID-19. Since that time, Canadians’ worries appeared to be dissipating as that percentage progressively dropped until it reached 51 per cent on May 25. It remained steady for several weeks until June 15, when it started creeping up again.

The cause for the recent uptick in coronavirus fears among Canadians may seem surprising given the steady decline in new COVID-19 cases in the country in recent weeks.

For example, Canada was reporting 1,154 new COVID-19 cases on April 6 – the peak time for Canadians’ fears about contracting the virus, according to CTV News tracking data from provincial government sources.

Compare that to June 15 – when Canadians’ fears began to climb again – and the number of new cases was only 330.

For Leger’s most recent survey period, between July 3 and 5, Canada was reporting an average number of 292 new cases per day, even though a rising 58 per cent of Canadians said they were afraid of getting the disease.

So why are Canadians’ fears about contracting coronavirus increasing when the number of new cases have been decreasing?

The answer, it seems, may lie south of the border.

While the Leger survey doesn’t draw any conclusions about what the collected data means, there is an apparent relationship between the growing fears about COVID-19 among Canadians and the rising number of new cases in the U.S.

For instance, on April 6, the peak time of Canadians’ anxieties according to the Leger survey, the U.S. was reporting 25,398 daily COVID-19 cases.

Nearly two months later, when Canadians were least afraid about contracting the disease – at the end of May to the beginning of June – the U.S. was reporting fewer daily cases of approximately 20,000 cases.

Fast-forward to the survey’s recent polling period of July 3 and 5, and the U.S. was reporting a dramatic increase in cases, averaging 51,000 cases per day.

Over the Fourth of July holiday weekend, for instance, the U.S. had more than 2.8 million confirmed cases – nearly a quarter of the 11 million infections worldwide – according to the tally by Johns Hopkins University.

News of the growing number of confirmed cases in the U.S. dominated international headlines through much of the weekend as Americans gathered for holiday celebrations.

And while the Leger survey doesn’t attempt to determine the source of Canadians’ increasing worries, there is some evidence to suggest they’re very much concerned about the situation in the States.

For example, a recent national survey by Destination Canada – a Crown corporation promoting tourism to Canada, found the majority of Canadians were against welcoming visitors from the U.S.

The online survey, which was conducted the week of June 23, found that respondents in Quebec were the most receptive to having American visitors at only 24 per cent with only 6 per cent of those from B.C. saying they would welcome them.

What’s more, Google Trends data reveals that Canadians are once again searching for terms such as “America, “covid” and “covid cases America,” after a lull since the end of March when searches for those words reached a peak.

As for the current plan to reopen the Canada-U.S. border at the end of July, Canadian respondents in the Leger survey appeared to be strongly against the idea with a total of 86 per cent saying they disagreed and 71 per cent of that total replying they “strongly disagreed.”

Using data from the 2016 Census, the results were weighted by gender, age, mother tongue, region, education level and presence of children in the household in order to ensure a representative sample of the population.