OTTAWA -- The federal deficit is projected to hit $343.2 billion this fiscal year, due in large part to massive economic aid and stimulus plans—that are on-par with Second World War level spending— that Prime Minister Justin Trudeau’s government has rolled out in response to the ongoing COVID-19 pandemic.

The deficit projection released Wednesday is up dramatically from the latest pre-pandemic economic update in December 2019, which pegged the deficit at $28.1 billion in 2020-21.

In addition to direct government spending, the new figures in the government’s fiscal snapshot show the negative impact the global pandemic has had on the economy.

Citing the “extraordinary borrowing” the federal government is currently engaged in, the government says the federal debt will exceed $1.2 trillion by the end of the fiscal year, up from $765 billion in the previous fiscal year.

With unemployment rates set to remain high into next year, the government is also projecting a $71.1-billion decline in tax revenue, including a $40.8-billion loss in income taxes.

“This spending level is on par with, but lower than the peak deficit (as a per cent of GDP) experienced by Canada during the Second World War. This is truly the challenge of our lifetime. As temporary investment measures come to an end and GDP recovers over time, deficits are expected to retreat,” reads the snapshot, in part.

In total, the federal government has spent more than $231 billion in health and safety measures as well as on direct aid to Canadians and businesses over the course of the pandemic so far.

Finance Minister Bill Morneau unveiled the revised economic picture inside the House of Commons, which is gathered for a special sitting. He spoke about how this current fiscal situation is an opportunity for Canada to rebuild and reshape the economy.

“We need to invest in an economy that is greener and more diverse,” Morneau said. “This pandemic has identified clear gaps and it’s giving us a chance to reset. We witnessed the ways in which people were falling through the cracks… In the coming months, we will need to come to these problems with dedication, compassion, and ingenuity.”

During a press conference with reporters during a largely virtual “lockup,” ahead of tabling the 168-page snapshot, Morneau called the pandemic “an enormous shock to our system.”

“We faced an enormous shock to our system,” Morneau told reporters. “It’s hard to know where we will be in a month, two months, or six months. What we know for sure, is that if Canadians work together, we can continue on what we've seen as a month-by-month improvement of our situation, and our economic outcomes will be related to our success working together on our on our health challenges.”

He also suggested a silver lining in regards to Canada’s increased debt-to-GDP ratio. With current public debt charges at around one per cent of GDP, the cost to service the now ballooning debt is actually $4 billion lower this year than expected, given the historically low borrowing rates.

Due to the COVID-19 spending, the federal government now projects its debt-to-GDP ratio will rise to 49.1 per cent in 2020-21. In the pre-pandemic December economic update, Canada’s debt-to-GDP ratio was at 30.9 per cent and was projected to remain on track to reduce incrementally over the next few years.

“Even after our historic investments, Canada will continue to hold its low-debt advantage. This, combined with historically low interest rates, gave us the balance sheet to deploy our fiscal firepower to support Canadians through this,” Morneau said, though noted that his and likely future governments will have to face up to the deficit.

The government is emphasizing the “challenge of a generation” that the COVID-19 pandemic is posing, and noted the serious and ongoing impacts. Over the last few months, federal job numbers have already showed 5.5 million Canadians are either out of work, or have lost wages; and a growing list of businesses are set to shutter their doors permanently.

Citing economists, in the snapshot the government says the overall economy is expected to contract by 6.8 per cent in 2020, which is its sharpest drop since the Great Depression, before rebounding by 5.5 per cent in 2021.

All of this is contingent on how the ongoing health crisis is managed, the government notes throughout the snapshot, emphasizing the economy’s health is largely in the hands of Canadians’ efforts to stave off a second wave of the novel coronavirus.

The snapshot also includes several scenarios for future economic outlooks, depending on what happens with the pandemic, from a gradual but uneven recovery to a virus resurgence scenario which would result in a “deeper and longer-lasting negative impact on the economy.”

While the government optimistically believes the worst of the economic impact is behind us, it will be a long time before a rebound, even under the most positive pandemic scenario that would see a vaccine discovered within the year.

Speaking to reporters in advance of the revised economic picture being made public, Trudeau said that the situation would have been much worse had the federal government not brought in massive aid measures.

“When the pandemic first hit, a lot of people lost their jobs overnight. They didn't know how they were going to feed their families, or pay their bills. Faced with this unprecedented challenge our government had two options: We could sit back and let Canadians fend for themselves... or we could swiftly and substantially choose to support Canadians. We chose to support Canadians,” Trudeau said. 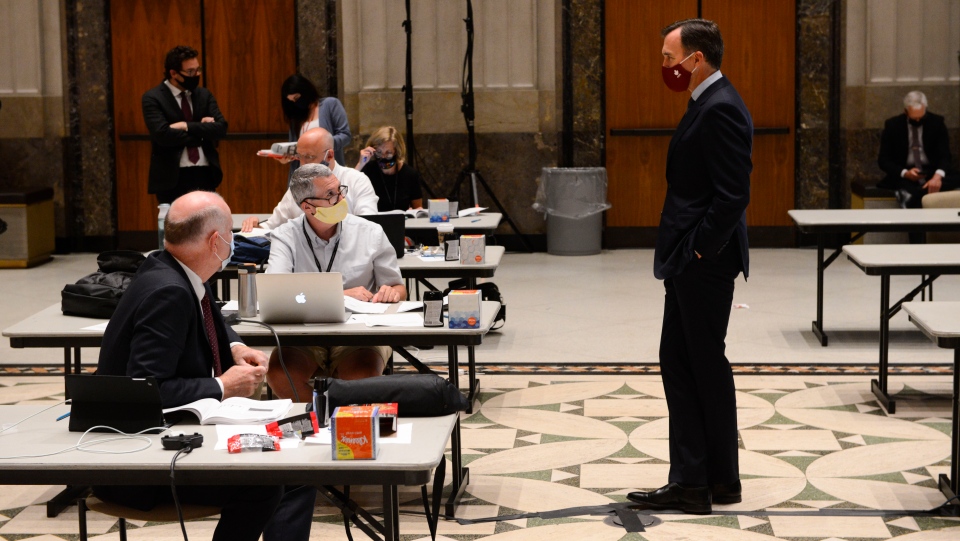 The report — which is not a federal budget or a fiscal update — shows that, since March, the federal government has spent more than $231 billion on health and safety measures as well as direct aid to Canadians and businesses.

Though, the government cautioned in the document that the cost estimates for many of the aid programs have been “difficult to establish, given that they are brand new programs, launched in a highly volatile economic environment,” and said further updates will come as the data comes in.

Of that figure, $19.8 billion is considered spending for health and safety measures, and includes the $14 billion earmarked to go to the provinces and territories for their “safe restart” plans. The direct support totals $212.2 billion and includes the suite of emergency response aid programs, as well as the support for local community organizations on the front lines of delivering key services to Canadians.

It also details the cost of a range of non-COVID-19 policy actions taken by the federal government since the 2019 economic update, which in total for the 2020-21 fiscal year amounts to just over $9 billion.

The government says the pandemic aid spending — on everything from support for seniors and farmers, to stocking up on personal protective equipment and vaccine development — is “the most comprehensive and substantial peacetime investment in Canada’s history.”

The biggest-ticket items to date, which the government said could still evolve over time, include:

As well, in an effort to buoy businesses big and small, in addition to the direct spending offered, the federal government has made available $600 billion in liquidity and government-guaranteed loans which Morneau has said he hopes will bridge key job creators in this country to better times. This included $85 billion in tax and customs duty payment deferrals, to help companies free up some of their funding for other expenses.

In his Commons remarks, he notes that nearly nine out of every 10 dollars in COVID-19 aid delivered to Canadians and businesses is financed by the federal government.

The snapshot also looks at how Canada’s economic response compares to that of other countries, and outlines the plummet that consumer confidence and mobility trends have taken over the last four months.

In an interview on CTV News Channel reacting to the news, Parliamentary Budget Officer Yves Giroux said he was “scared and disappointed,” after seeing the snapshot.

The deficit is almost $100 billion larger than his office estimated the deficit was on track to hit $256 billion this fiscal year.

“We still don't have any sense of what is the government's game plan to get the Canadian economy back on track again,” Giroux said. “It's a much bigger deficit than even I expected, and that's why it's really scary to see these big numbers.”

He is calling on the federal government to look at ways to rework the Employment Insurance program to help those who have maxed out their benefits but remain out of work due to no fault of their own, as several industries are set to take months longer than others to rebound.

The snapshot includes information from the Canadian Federation of Independent Business that shows that while the construction, agriculture, manufacturing and personal services sectors are closer to being considered fully open, large portions of the hospitality, arts and recreation, social services, retail, and real estate sectors will take a lot longer before the majority of businesses are fully open for business.

Today’s snapshot comes after opposition parties and economists called for a look at the federal books, and after resisting a more robust update, the government now says it is planning to release a larger fiscal outlook in the fall.

The overall economic numbers are the first offered by the federal government since the December 2019 update, which was the only one since the Liberal formed a minority government in the last election.

They are limited to the current picture within this fiscal year, ending March 31, 2021, given further predictions could be inaccurate given the ongoing volatility, according to the government.

The 2020 federal budget date was scheduled to be March 30, but that was cancelled due to the COVID-19 pandemic surging at the time.

Reacting to the figures in the House of Commons, outgoing Conservative Leader Andrew Scheer called the snapshot “an extremely dire picture,” and criticized the government for lacking a plan to get Canada’s economy back on stable footing.

“Coming out of the pandemic, every single country on the planet will be desperately competing for the same opportunities and the same investments, so where is the prime minister’s plan to set us apart?” Scheer said.

NDP Leader Jagmeet Singh is now calling on the federal government to look to offshore tax havens to drum up revenue to try to offset the ballooning debt and deficit, as well as imposing a “wealth tax” to raise revenue.

“Let’s ask the wealthiest to bear the brunt of the pandemic, not the families and the working people who are struggling to get by,” Singh said.

Green Party Parliamentary Leader Elizabeth May called on the government to move on the promised aid for people with disabilities that has been caught up in procedural limbo and has yet to be implemented, despite being promised several weeks ago.

It’s likely to now be a years-long endeavour to navigate Canada out of the red. While the fiscal snapshot includes a chapter on the government’s debt-management strategy, given the limited time frame the document covers, there is no plan to return to balance included.

The COVID-19 fiscal snapshot: By the numbers

Scheer calls it 'ridiculous' to be asked about breaking mask rule