Canadian communities and businesses to feel the pain of cruise cancellations 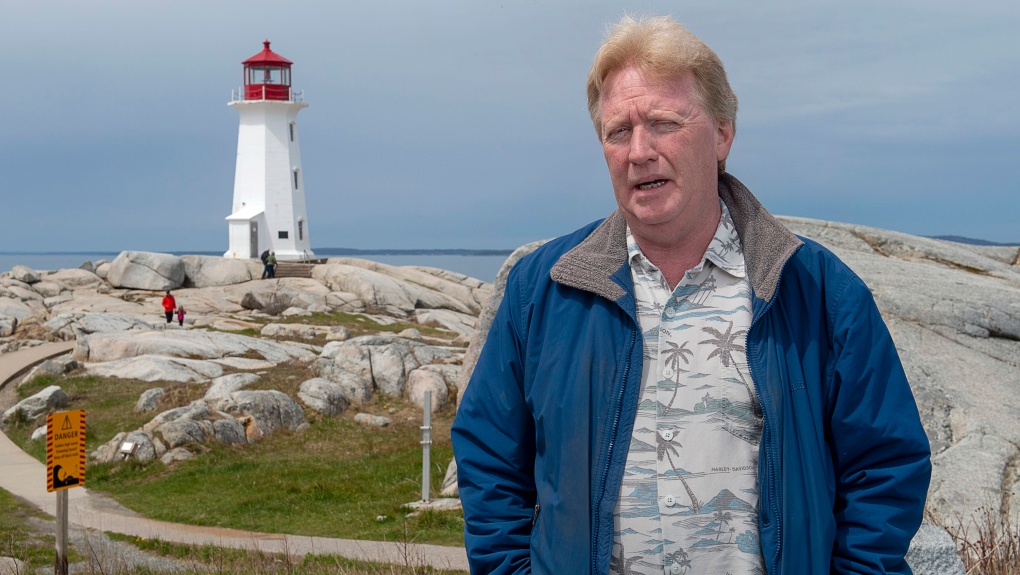 John Campbell, owner of the Sou'Wester Restaurant and Gift Shop in Peggy's Cove, N.S. stands near the lighthouse on Friday, May 15, 2020. (THE CANADIAN PRESS / Andrew Vaughan)

TORONTO -- Picturesque Peggy's Cove, N.S., is normally a great place to run a business but restaurant owner John Campbell hopes he can survive the cancellation of cruise ships this season because of COVID-19.

"I'm doing everything I can to survive but there's a lot of companies that are going to be in big trouble for sure," he said in an interview.

The Sou'Wester Gift & Restaurant Co. has been attracting customers for more than 50 years. Campbell said it's not unusual to have scores of buses filled with cruise passengers stop at the business founded by his father each fall day when cruises peak.

The kickoff to his summer in Nova Scotia and at a gift shop that he owns on Prince Edward Island was delayed because the U.S. border is closed.

Revenue is expected to be cut by at least half this year after four cruise lines -- Holland America, Princess Cruises, Seabourn Cruises and Carnival Cruises -- cancelled calls to Canada and Alaska this season. In addition, the federal government has imposed a ban on cruises through at least July 1 that will reduce the number of visitors.

Campbell believes there's less than a 50 per cent chance that cruises will make an appearance at all this season, which would force him to rely only on local or regional traffic.

"If we only have Nova Scotia people allowed to come out here I think the reduction will be more than 50 per cent. I think it'll be the 60 to 70 per cent, so, it's gonna be devastating."

Cruising has grown annually in Canada and contributed $4.1 billion of economic impact in 2018, up from $3.2 billion two years earlier.

In Atlantic Canada, 873,000 passengers generated more than $373 million in direct and indirect impact to the economies of the four provinces last year, says Jeff Stevens, executive director of the Atlantic Canada Cruise Association.

Before COVID-19, the number of passengers to Atlantic Canada was forecasted to grow 14 per cent to about one million in 2020.

The estimated impact to B.C. from the delayed season is nearly $1.5 billion, according to the Port of Vancouver. Every ship that docks in Vancouver contributes about $3.3 million to the local economy while Greater Victoria sees a $100 million economic impact and 700 jobs from cruising in 2018.

"I have never seen anything that has impacted cruising and tourism overall, for that matter, in the way that this has if we think of the impact on our day-to-day lives," she said from Vancouver.

A spokeswoman for Transport Minister Marc Garneau declined to say if the July 1 ban will be extended.

"The Government of Canada is looking at all available options for this year's cruise ship season and will be guided by public health advice," Livia Belcea wrote in an email.

Spalding said there's no doubt that the suspension will hurt Canadian jobs and families but it will especially have a significant impact on small communities and tourism partners that rely on cruise tourism.

"And they may not be able to get through a whole year and be viable again next year," she said.

He said half his marine fleet will be docked if the ban on cruises into Canada is extended, while amphibious vessels that operate on land or water will continue this summer.

But he expects to lose one-third of his revenue if no ships arrive in eastern ports at all this year.

The Port in Charlottetown says the cruise cancellations mean its season will only begin in September, if at all, said Corryn Clemence, cruise development, communications and brand manager for the PEI port.

"We have a lot of small operators that rely heavily on this business throughout the season. So I think the ripple effect, not just from a port standpoint, but from the tourism operators standpoint is massive."

Dawson City may be far from the ocean but it also expects to feel the pain after Holland America cancelled its trips to Alaska with about 15,000 passengers flying over three months each summer to the Yukon town for two days.

An estimated $10 million is brought into the town in addition to about 100 people who are hired at the cruise line's Westmark Hotel, that won't open this year. The Klondike Spirit, a paddle boat that travels up the river, won't be operating because of the loss of its primary customer base.

"The smaller businesses will be the ones that suffer the most throughout it. They have less resources than the big businesses to survive through this," said Paul Robitaille of the Klondike Visitors Association.

The town founded from the Gold Rush in 1896 will survive without the cruise line, he said, but it will be totally different because it accounts for 15 to 20 per cent of summer tourism.

"It's already shot for this year, so hopefully they don't ban until next year at some point which would hurt us as well," he said.

Despite the challenges, Robitaille's hopeful that cruises will eventually return, noting it's a resilient industry that attracts people, some of whom only travel by cruise.

"I think that they've got the money to make the changes necessary to kind of face the restrictions that might be imposed on the industry and if anything...they have more resources to come out of this than small businesses do."

This report by The Canadian Press was first published May 17, 2020.

How the first Canadian COVID-19 vaccine trial will work

Total number of deaths due to COVID-19 in Quebec passes 3,500

Youth more concerned about health of others than their own amid pandemic: StatCan