TORONTO -- Amirhossein Sahragard has only been in Canada for less than a week but -- after nearly seven, harrowing years being detained for seeking asylum -- he’s experiencing joy.

“I still cannot believe I have freedom and that I’m now living my life in Canada. It’s like a dream for me -- a dream come true,” the 27-year-old Iranian told CTVNews.ca in a phone interview, after he arrived in Toronto last Thursday.

Sahragard spent nearly seven years in an offshore detention centre in Papua New Guinea (PNG), after he attempted to claim asylum in Australia by boat. While detained, he said he survived riots and repeated bouts of illnesses and beatings.

He described being kept on PNG’s Manus Island’s facility as a worse fate than a convicted criminal -- because at least they “know when they’re going to get free or stay there forever.”

But now, thanks to part of a private sponsorship program, Sahragard is one of two former detainees landing in Canada as legal permanent residents, with the second scheduled to arrive Friday.


'WE WERE FAR AWAY FROM HUMANITY'

Sahragard declined to divulge exactly why he fled Iran but said his boat eventually docked on Australia’s protectorate of Christmas Island in July 2013.

But earlier that year, the Australian government declared it wouldn’t settle any refugees who came by boat. Instead, asylum seekers would be shipped to surrounding nations.

Sahragard -- like thousands of others -- were shipped to Manus Island, with families being taken to Micronesian island of Nauru. There, it dawned on him that he was now indefinitely trapped in a legal whirlpool.

He said he routinely saw dozens of men beaten, plagued with sickness or even killed. “It was a dark place and it was worse than anyone could imagine,” he said. “We were far away from humanity.”

During his nearly seven-year detainment, he said people routinely woke up terrified. So Sahragard became morbidly grateful for “one of two hours without nightmares.”

But around two years ago, Sahragard said one of his pleas for help had reached the right ears.


'THERE’S NO WORD THAT I CAN GIVE'

Watt told CTVNews.ca in a phone interview he first realized “the beauty of private sponsorship” during the height of the Syrian refugee crisis. After that, he focused on LGBTQ refugee cases and now, Manus Island cases.

The federal Canadian government requires at least five people – who raise $16,500 -- to privately sponsor a refugee. After hearing about Sahragard’s story, Watt managed to track down four of the Iranian’s distant cousins in Canada to officially help to sponsor him.

And after two long years, the sponsorship process was finalized fewer than three weeks ago. “There’s no word that I can give to say thank you and appreciate what they were doing for me,” Sahragard said.

Because Sahragard has permanent residency papers, he’s neither an asylum seeker nor a refugee. Watt explained “they come here with 90 percent of the same rights and privileges as us citizens have -- everything but the ability to vote, as far as I know.” 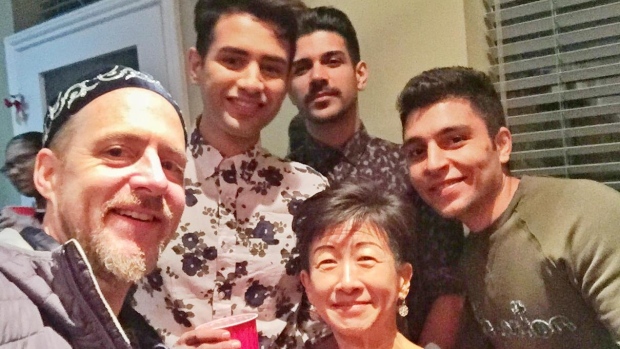 When he arrived in Toronto last week, he was reportedly greeted by a friend he’d met in Manus and people he’d spent years speaking to but never met: his sponsors and two of his cousins.

“I never thought I’d have anything from Iran again,” he said. Watt has been showing him around the city, helping him set up a bank account, a SIM card for a cellphone and a Social Insurance Number.

Sahragard said he wants to resume his life, including potentially teaching children sports or taking up personal training. He also says he looks forward to playing soccer again -- although he’ll wait for a warmer season.

“It’s a great country, it’s a great city … when I go around Toronto, I still think I’m dreaming,” he said, although he admits the nightmares are still an issue. “I still wake during my sleep and think that I’m still there.”


WORLD NOT DOING ENOUGH TO CARE FOR REFUGEES

Another thing he can’t shake are his friends, symbolic family and complete strangers still detained on Manus Island. Sahragard said “the only reason” he was speaking to media was because of them.

He called for the freedom of those detained on Manus Island and Nauru who simply want to “gain a new life and be born again.”

“The only thing people want there is a life (in a) safe country where they could live,” Sahragard said. “The only thing they, me and my friends did wrong was go to Australia by boat.”