TORONTO -- A new survey suggests the number of Canadians who’ve experienced homelessness in their lives may be higher than reported -- and could rise due to the COVID-19 pandemic.

The survey, commissioned by the Canadian Alliance to End Homelessness (CAEH) and conducted by Nanos Research, suggests five per cent of Canadians have been homeless themselves, while another 31 per cent know someone who has been homeless.

Tim Richter, the president and CEO of the Canadian Alliance to End Homelessness, said this five per cent translates to 1.6 million Canadians, a higher number than he’s seen previously.

“It's interesting just to see how widespread homelessness is … and how many Canadians’ lives it touches,” he said in a phone interview with CTVNews.ca.

When it comes to people who rent, 11 per cent reported having experienced homelessness, while 25 per cent of renters are worried about coming up with rent for the next month.

“That's a fairly alarming stat that I think really points to the urgency of Canada's housing crisis and the impact of COVID,” Richter said.

At the beginning of the pandemic, several provinces, including Ontario, Alberta and British Columbia, implemented moratoria on evictions, but many of those are ending or have already ended, while renters are still dealing with the economic consequences of the virus, which could leave them in a tough position.

Richter worries that the number of people experiencing homelessness may rise due to this uncertainty.

“If the economic impact of the pandemic continues to disproportionately affect lower-income Canadians who are essential workers who are working in lower-income jobs or have insecure employment, you're certainly going to see that pressure,” he said.

“There's a real concern about: ‘Could the ongoing economic instability create a new wave of people experiencing homelessness in Canada?’ and I think that's certainly a concern we have.”

In July, CAEH released its “Recovery for All” plan, which suggested homelessness could be solved by 2030 if the federal government used $52 billion worth of COVID-19 economic recovery measures in targeted spending to help end homelessness.

“We've outlined what we think is an affordable and achievable path to end homelessness in Canada and what the poll is telling us is that there is strong public support for doing so,” Richter said.

“We're really thrilled to see the strength of support for investing in housing,” Richter said.

“Clearly, Canadians want the federal government to act and to act decisively.”

In Toronto, city officials leased two apartment buildings during the height of the pandemic to help ease crowding in the shelter system. In total, 149 people experiencing homelessness were given a place to live in these buildings.

Robert Dods was living in a tent in downtown Toronto before he was given a spot in one of these buildings.

“It’s not fun living on the streets,” he told CTV News.

The housing program is set to end on Aug. 31 and has seen its share of controversy, including a stabbing, a fire and complaints from neighbours of drug paraphernalia, but Dods said these are the actions of just a few people.

Under the Recovery for All plan, the budget would be used in part to create more than 370,000 affordable housing units in the next 10 years and converting hotels and apartments into affordable housing units. The organization says this would create up to 500,000 jobs over the next 10 years and could save taxpayers $18 billion that would have been used on emergency measures that leave people homeless.

“We've shared our proposals and we're sharing the results of this poll with decision makers in Ottawa and we’re hopeful that they're going to see an achievable path forward and strong public support to do so,” Richter said.

The plan has the approval of advocates, who call homelessness a public health crisis and believe access to affordable housing is part of the solution.

“We know that the pathway to optimal health is paved with appropriate access to income and certainly housing,” said Dr. Naheed Dosani, a palliative care physician and homeless health advocate. 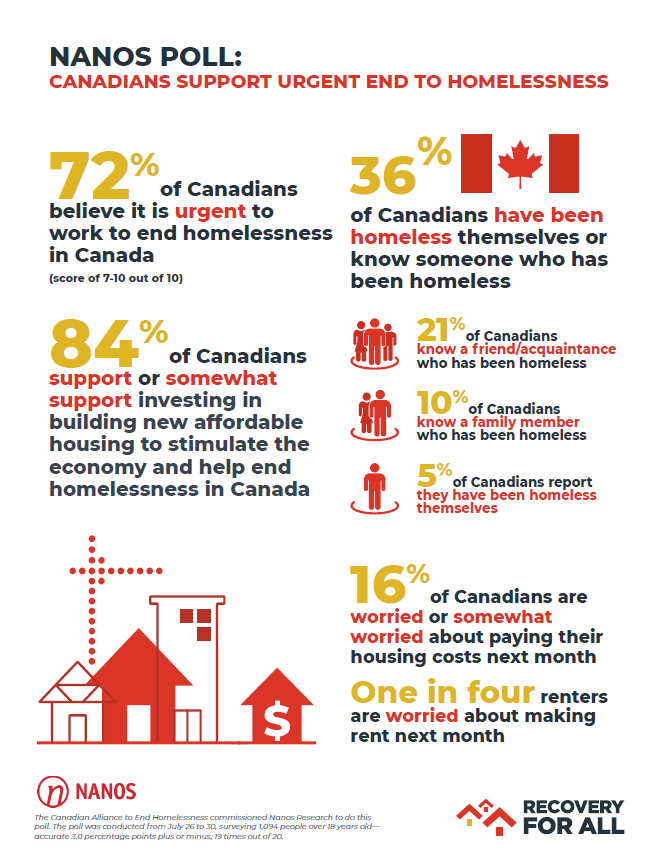 Nanos conducted an RDD dual frame (land-and cell-lines) hybrid telephone and online random survey of 1,094 Canadians, 18 years of age or older, between July 26 and 30, 2020 as part of an omnibus survey. Participants were randomly recruited by telephone using live agents and administered a survey online. The results were statistically checked and weighted by age and gender using the latest Census information and the sample is geographically stratified to be representative of Canada.

The research was commissioned by the Canadian Alliance to End Homelessness and was conducted by Nanos Research.