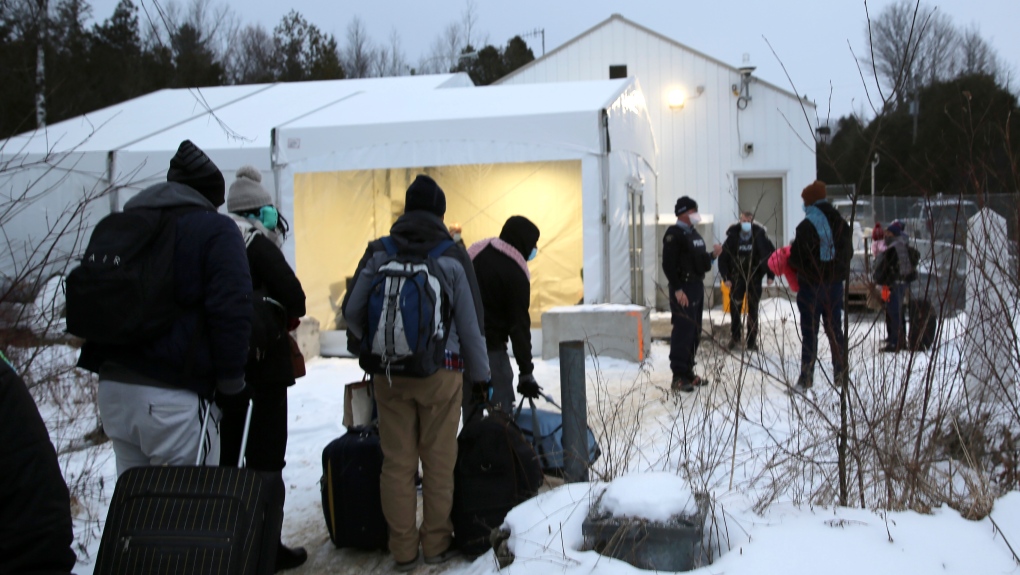 Migrants line up on the border of the United States, foreground, and Canada, background, at a reception center for irregular borders crossers, in Saint-Bernard-de-Lacolle, Quebec, Canada, Wednesday Jan. 12, 2022, in a photo taken from Champlain, N.Y. (AP Photo/Wilson Ring)
TORONTO -

The number of asylum seekers entering Canada between formal border crossings has surged to the highest point since the government started tracking them in 2017, as dropped pandemic restrictions enable more travel and conflict and catastrophe displace people in many parts of the world.

In the first eight months of 2022, Royal Canadian Mounted Police intercepted 23,358 asylum seekers crossing into the country at unofficial entry points, 13 per cent more than all of 2017, when an influx of border-crossers at Roxham Road, near the Quebec-New York border, made international headlines.

The surge in irregular entries comes as Canada prepares to defend at the Supreme Court the Safe Third Country Agreement with the United States under which it turns back asylum seekers trying to cross at regular ports of entry.

Because of this agreement asylum-seekers cross between ports of entry and turn themselves in to police to pursue refugee claims. Canada is trying to extend the agreement so it applies across the entire land border.

"I think it's like any travel: People are just on the move again."

But immigration experts say the rise is another sign that when countries like Canada and the U.S erect barriers to orderly entry, displaced people will turn to other modes.

If Canada does not want to deal with irregular crossers, it should scrap the agreement that bars them from crossing at regular entry points, said Janet Dench, executive director at Canadian Council for Refugees, which is taking the Canadian government to court.

Earlier this year, the federal government transported 1,922 asylum seekers to neighboring Ontario after the Quebec government said it could not handle the volume.

Lawyer Pierre-Luc Bouchard has been run off his feet with what he says is the biggest summer-fall season he has seen. Bouchard has about 140 active refugee files, one file per family, from countries ranging from Ghana, Colombia and Chad to Venezuela, he told Reuters.

Bouchard is frustrated at the long wait for his clients to secure their work permits, leaving them on social assistance.