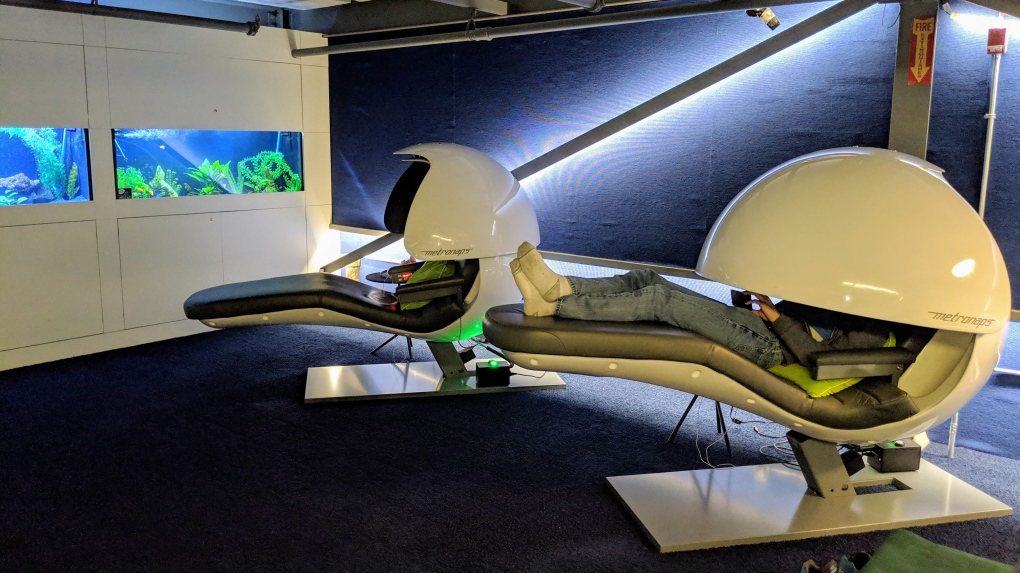 A Google Canada employee reclines on one of two nap pods at its offices in Kitchener, Ont., in this undated handout photo. (THE CANADIAN PRESS/HO - Google Canada)

The Toronto boss of EventMobi describes himself as "the only CEO that promotes people to sleep at work," insisting the policy boosts productivity and company morale.

To that end, EventMobi's open-concept waterfront office features a private nap room where workers can grab a few Zs if they feel sluggish, or just get some alone time in a dark space if they have a headache or don't feel well.

"It's just from my own experience," Vaez says of his reasons for setting up the quiet space.

"As (with) any other tech professional worker, you work really odd hours and your brain just sometimes shuts off. Especially after lunch you just can't work and I've been to other offices (where) people sleep at their desk and it's really frowned upon. If you can't work, what's the point?"

The benefits of adequate sleep are well-established, but Vaez's willingness to address tired staffers in such a direct way is relatively rare.

Still, he's not the only one.

Google Canada spokesman Aaron Brindle says nap rooms can be found in the tech giant's offices around the world, including the Toronto office where a wellness space for nursing mothers can be reserved for taking a break, or taking a nap.

Another space at their engineering headquarters in Kitchener, Ont., features two high-tech recliners with large spherical privacy visors for extra-tired employees looking to grab some shut-eye.

Meanwhile, management consulting firm Accenture says its three-floor Toronto office features a wellness room where staffers can snooze. That's in addition to various inclusivity initiatives -- gender neutral and accessible washrooms, a room for nursing mothers, and a meditation/prayer room with a foot-washing station.

It's a phenomenon that seems primarily centred in technology and marketing sectors, says Alina Owsianik, director of talent acquisition, diversity and inclusion at Randstad Canada.

Owsianik knows of at least five Randstad clients with nap rooms, and credits their existence to a new generation of workers who increasingly blur the line between their home and work lives.

"Millennials are spending much more time than our parents did at work. They also work crazy hours, different hours, and we want to adjust the work style and the balance to their needs," she says.

"(That includes) a lot of development shops, technology shops, where maybe there are crazy deadlines or people like to work in the evenings (and) have a nap during the daytime. That's why we see employers actually adapting the workspace and creating a dedicated space to take a nap."

She believes it's more than just a fad, insisting "they are becoming more and more popular" as an added tool to recruit top talent.

Owsianik says Randstad began testing its own version of the nap room, dubbed the "recharge room," after an employee committee suggested the measure as a way to address mental-health issues.

It has a couch, diffuser with essential oils, a salt lamp, mats for stretching, and a couch for resting and napping.

"There are a lot of people that are not declaring disability or mental disability," she notes.

"And we are working in a highly sales-driven environment where there is a lot of stress so we really wanted to create a space where people can relax, have a nap."

For job-seekers weighing multiple offers, a healthy workplace can win them over, she adds, believing many workers want more than just a good salary.

Universities, too, are recognizing that some of their students are exhausted by long commutes, awkward class schedules, jobs and personal commitments.

Two years ago, the student union that jointly serves Humber College and the University of Guelph-Humber created two sleep lounges for its two Toronto campuses, and then doubled the number of beds at one of them last September.

The expanded lounge now has 12 beds while the second hosts eight. Together, they've drawn about 4,000 users this school year, well surpassing the 3,000 that dropped by during the entire school year in 2017-2018, says the union, known as Ignite.

"We are a commuter school and a lot of our students, they don't get to go home until maybe eight or nine hours after they've had a whole day on campus," says union president Monica Khosla, who represents students at both schools, which includes a satellite campus for the University of Guelph.

Over at Toronto's Centennial College, the student union bought four so-called "EnergyPods" by the U.S. company MetroNaps last August, adds spokesman Brad Beamish. One has been installed next to the cafeteria, another in the library.

Their many features include a retractable privacy visor, speakers that whisper relaxation music and pre-programmed relaxation guides, wake alarms, lights and vibration controls.

"There were basically people jumping in them before they were finished being set up. The demand was almost immediate," Beamish recalls.

Productivity expert Lisa Belanger is glad to see such initiatives afoot, noting that other countries seem to understand the need for work/life balance far better than Canada.

She points to Finnish sauna culture and the Swedish coffee break known as Fika.

"Europe is doing better on this for sure with valuing vacation, respite, weekends," says Belanger, a post-doc researcher at the University of Calgary whose work includes looking at effective break strategies.

Historically, labour breaks were introduced to boost efficiency, she notes. These days, they are eliminated in the belief they slow us down.

"Coffee breaks were designed in the industrial era so that it increased productivity, reduced safety concerns and injuries and errors," says Belanger, also CEO of the consulting firm ConsciousWorks, which looks at how brain health, nutrition and sleep affect performance.

"It's gotten to the point where we kind of skipped over them. We put our coffee in a to-go mug and just get it in us as quickly as possible and forget that our brain requires breaks."